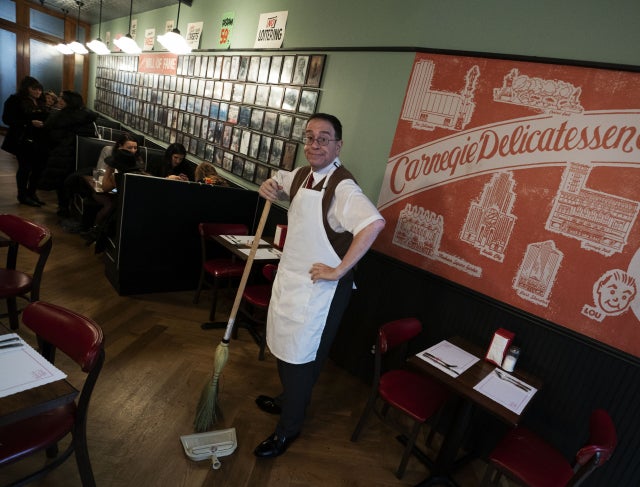 Bernie poses for a photo as he cleans the deli on November 30, 2018 at the Carnegie Deli pop-up in New York. The deli is hosting a pop-up shop in Lower Manhattan from December 1-8, 2018. The seven-day revival is part of a promotion for the Amazon Prime television series“The Marvelous Mrs. Maisel", a clever marketing operation in the era of selfies and social networks. Image: AFP/Don Emmert

The Carnegie Deli was a New York institution for decades until it closed its doors in 2016.

The pop-up restaurant — a fully-functioning eatery, not just Instagram bait — has shifted from midtown Manhattan to the Nolita neighborhood.

It has also shifted back in time to the 1950s to suit the program, which tells the story of a New York housewife who turns to stand-up comedy when her husband leaves her for another woman.

“Mrs Maisel” racked up eight Emmys and two Golden Globes for its debut season, including statuettes at both galas for best comedy series.

Season two will go live Wednesday on Amazon, the online retail giant with ever-increasing ambitions in the world of original entertainment.

The deli’s former owners worked with Amazon to get every last detail right — the wait staff, the menus, the jukebox, the kosher-style favorites.

There is even a sandwich named “The Midge” — pastrami, salami and cole slaw on rye — after Mrs Maisel. The price? A period-appropriate 99 cents.

Joshua Greenberg, who is the producer behind the pop-up, said the creative team worked hard to replicate “the look and feel of the show, which has a very distinct, beautiful art direction.”

New Yorkers are wild about the idea. Reservations for the 15 tables or so were all snapped up for a week within three hours. Fans who can’t get a table can order takeout — at the counter.

The return of the legendary deli, which was open for eight decades, is the latest in the “pop-up” trend — a temporary store or restaurant designed to generate buzz.

“People want to be in an environment that is unique. They want to put it on Instagram or on some other social platform,” Greenberg said.

“We’re hoping that people see it online and say to themselves, ‘Wow, I wish I was there.'”

The restaurant opened on Saturday at 11:30 am (1630 GMT) and will remain open through December 8. A few walk-in seats will be available so a line is expected.

Organizers have bought 4,000 pounds (1.8 metric tons) of pastrami for the week.

No matter what happens, Marian Harper, the president and owner of the Carnegie Deli brand, has no plans to reopen a restaurant in New York over the long term, explains her daughter and brand vice president Sarri.

All of the proceeds from the project will go to the Lower Eastside Girls Club, a community center for area youth.