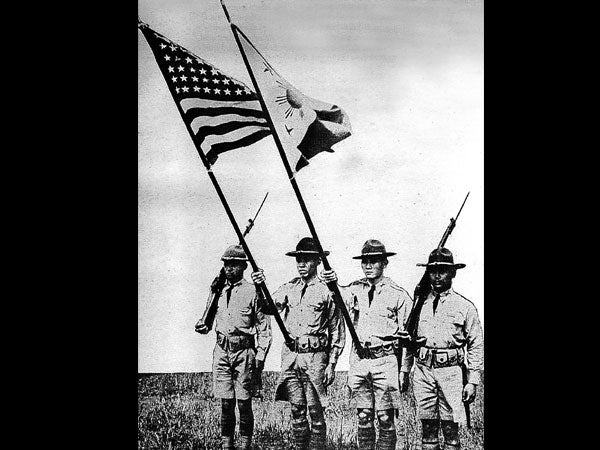 TO BE OR NOT TO BE. Early stirrings of the Statehood Movement during the American Occupation. Photo credit: From “The History of the Burgis”

From Statehood to Nationhood

I wonder at times if younger Filipinos are aware of this Philippine Statehood Movement that once pushed very hard to have the Philippines become the 51st state of the US. The proponents of the movement made a lot of noise and claimed that they had millions of members.  They got front-page newspaper coverage, usually by criticizing the sorry state of Philippine affairs and claiming that this was what happened because we had listened to President Manuel L. Quezon, who once said: “I would rather have a country run like hell by Filipinos than a country run like heaven by the Americans, because however bad Filipino government might be, we can always change it.”

They’d quote Quezon and proclaim: “See what happened?  We got hell!”

Yet over the last 10 years or so, I’d rarely heard about this Movement.  I searched the Internet and found that their most recent posting was a statement going back to Dec. 11, 2000, from “Aksyon! (USA) Statehood Party,” with its main call for “dollarization” or adopting the American dollar as Philippine currency.

Their statement was posted on what seemed to be borrowed space from a US-based group called the Expansionist Party, which describes itself as “dedicated to the geographic enlargement of the United States.”

The idea that the Philippines might be better off as part of another country is not new.  Even our national hero, Jose Rizal, along with other Filipinos exiled in Europe, was inclined to have the Philippines remain part of Spain, with Filipinos having equal rights as Spanish nationals. Ironically,  Rizal was executed purportedly for supporting armed insurrection, a charge he vigorously denied.

There are ongoing debates on what Rizal’s sentiments were, often around a passage in his famous essay, “The Philippines: A Century Hence” where he asks if we would stay a Spanish colony, become a Spanish province (“with or without autonomy”) or become independent.  He answers his own question by admitting that it is impossible to reply to those questions with a “yes” or a “no.”

Rizal’s support for the Philippines remaining as part of Spain should not, I feel, detract from his greatness.  He was a fierce nationalist, mincing no words in lashing out at the abuses of the Spanish colonial government, especially the friars.  He was particularly incensed by the way Spanish colonialism had taken away our memory of our past.

When the Americans took over the Philippines, there were Filipinos who advocated American statehood.  Pedro Paterno, Trinidad Pardo de Tavera and other prominent upper-class Filipinos established the Partido Federalista in 1900 and initially had a majority in the Philippine Assembly, thanks to support from Manila’s voters and the patronage of US Governor General William Howard Taft.

The Partido Federal eventually split up, one faction becoming the Partido Nacionalista and the other the Partido Progresista. The name change was not incidental, US statehood now dropped from the rechristened party’s platform.  The erstwhile Federalistas knew statehood was an unpopular cause; on the campaign trail, they were poorly received by Filipinos and in some areas, actually faced death threats.  The Partido Progresista progressively lost steam and could not even run in the 1914 elections. It never made it back to politics.

The very negative attitude toward the Federalistas was only one manifestation of Filipino nationalism.  All throughout the American Occupation, there were various movements pushing hard for Philippine independence, using all kinds of fora, including theater and kundiman to express nationalism.  “Bayan Ko,” with its yearnings for freedom, dates back to this era.

Nearly half a century of formal American Occupation did instill a colonial mentality in Filipinos, a love for all things Stateside and an aping of American culture.  This mentality has persisted long after we regained independence in 1946.

The American statehood movement represented an extreme form of this colonial mentality.  Unlike Rizal, who saw Filipinos as having much to be proud of, the statehood movement advocates saw no hope in Filipinos running the Philippines.  Our only salvation, if this group were to be believed, was to subject ourselves to American governance.

Why has the statehood movement faded practically into oblivion like its predecessor, the Partido Federalista?

One possible explanation is that so many Filipinos – at least 3 million – have in fact achieved the American dream, becoming permanent residents or US citizens.  The number of beneficiaries is multiplied several times over by relatives of those Fil-Ams who regularly receive balikbayan boxes (even if the manna from heaven are now rarely Stateside goods).

Paradoxically, the increasing number of Filipinos now benefiting from living and working overseas may have helped to temper our views of America.  Many Filipinos live in Europe (including Spain), exposing us to more than Mother America.  More importantly though, while acknowledging a higher standard of living in America and other countries, many Filipinos also have their share of stories that belie the utopian views of the west: racial discrimination, economic difficulties, political corruption and corporate plunder.

Even Aksyon! USA’s call for “dollarization” runs hollow today as overseas Filipino workers complain about the shrinking value of hard-earned dollars that they send home.

After all these years, despite the many economic and political problems we face, the sense of being Filipino has become stronger.  Rizal, for all the accusations hurled against him as being a lukewarm revolutionary, did his share, constantly reminding us to look back so we can move into the future, as a free and independent nation.