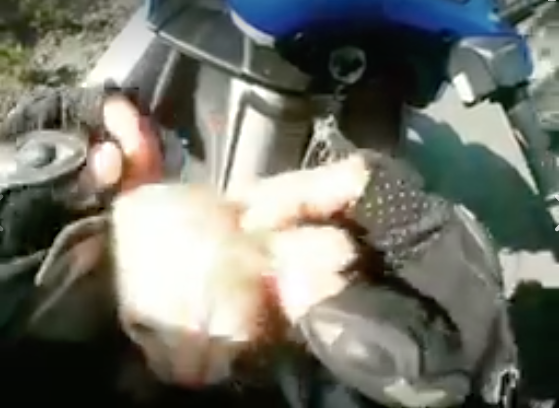 WATCH: Motorists save kitten stuck in middle of Quezon Avenue

What makes one a real hero at times is sheer determination to make positive change, no matter how small it might seem — just like one motorcycle rider, a jeepney driver and a cab driver who all attempted to save a kitten stuck in the middle of the busy Quezon Avenue.

Kristian Nabus, a web developer from Quezon City, told INQUIRER.net that he was heading to España, Manila at around 8:45 a.m. on Monday, Dec. 3, when he chanced upon a stray kitten, as seen on the footage he shared via Facebook on the same day. His post, which had gone viral, has garnered over 245,000 views, 3,900 likes and 2,200 shares, as of this writing.

pussy pussy pussy can you see ♫Riders, just save anything if possible rather than turn this cat into a splattered…

Nabus who was trying to find an open spot in the traffic for him to wedge into was taken by surprise when a jeepney in another lane suddenly stopped.

The jeepney driver, who was sporting a green shirt, went in front of Nabus’ motorcycle, signaling for Nabus to stop, then picked something up. Nearby, it could also be seen that a white taxi stopped, with the driver opening its door, in an attempt to also save the kitten.

The jeepney driver then went to the traffic island to deposit the object he picked up, which turned out to be an orange Puspin (“Pusang Pinoy” or Filipino cat) kitten. Nabus told INQUIRER.net he did not know how the kitten ended up in the middle of the busy road.

Upon realizing what the jeepney driver stumbled across, Nabus immediately asked the driver to give him the kitten instead. Since Nabus was not equipped with a cage to house the kitten while driving, he put the cat in his jacket.

He has named the kitten Aerox, fed it and brought it home with him.

“I just want to share this scenario to [raise] awareness,” Nabus told INQUIRER.net. “We, the humanity, can save anyone, can help anyone. Whether you are using a small bike or driving an expensive car, or a commuter or you are just loitering outside, show some kindness as even a small act of kindness will be appreciated.”

In a separate post on Monday, Nabus shared that Aerox found a new home.

Nabus, wishing to give the kitten the family it deserves, told INQUIRER.net that he let his cat lover best friend adopt Aerox. JB

Pre- and postnatal care for new puppies and kittens