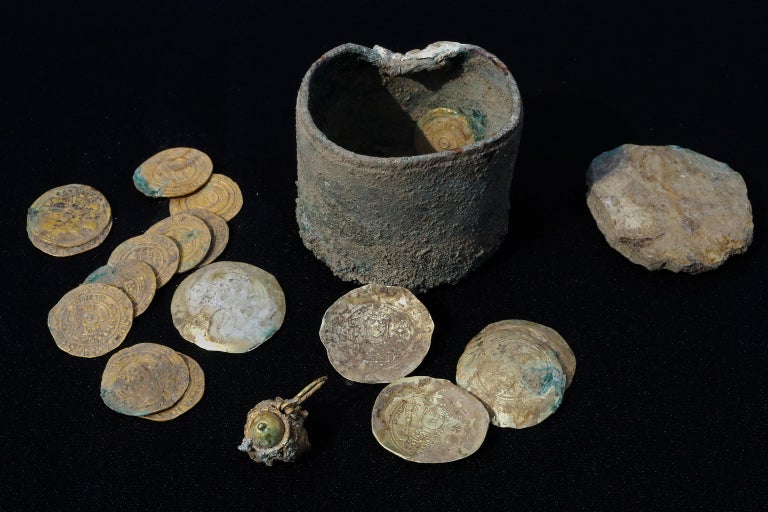 Ancient gold coins and an earring recently uncovered at an excavation site in the Israeli Mediterranean town of Caesarea. Image: JACK GUEZ / AFP

Rare gold coins and a golden earring have been discovered in the ancient Mediterranean port of Caesarea in northern Israel — possibly left and never recovered as Crusaders conquered the area 900 years ago.

The Israel Antiquities Authority announced the find on Monday of a small bronze pot holding 24 gold coins and the earring.

According to the authority, it was found between two stones in the side of a well in a house in a neighborhood that dates back some 900 years, during the Abbasid and Fatimid periods.

The directors of the excavation, the IAA’s Peter Gendelman and Mohammed Hatar, said the coins in the cache date to the end of the 11th century.

That makes it possible “to link the treasure to the Crusader conquest of the city in the year 1101, one of the most dramatic events in the medieval history of the city,” an IAA statement said.

“According to contemporary written sources, most of the inhabitants of Caesarea were massacred by the army of Baldwin I (1100-1118), king of the Crusader Kingdom of Jerusalem,” it added.

“It is reasonable to assume that the treasure’s owner and his family perished in the massacre or were sold into slavery, and therefore were not able to retrieve their gold.”

IAA coin expert Robert Kool said “one or two of these gold coins were the equivalent of the annual salary of a simple farmer, so it seems that whoever deposited the cache was at least well-to-do or involved in commerce.”

Caesarea was constructed in the first century BC by King Herod at a time that Judea was part of the Roman empire. NVG