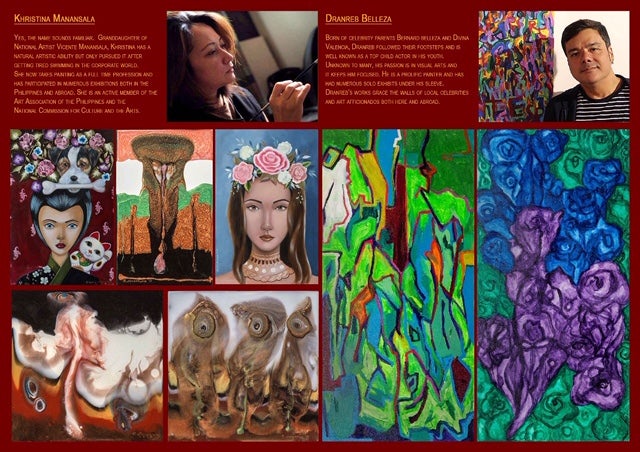 It took some time for Khristina Manansala to fully embrace the artistic talent in her DNA. But today, nine years after shifting to a career in art, the artist’s imagination and creativity are fully awakened, as her upcoming exhibit will show.

As a child, she romped through hallways filled with works of her grandfather, National Artist Vicente Manansala. Gifted with natural artistic ability but never encouraged to pursue art professionally, she spent six years in the corporate world before finally giving in to her original passion.

Since then, Kristina has come a long way in the notoriously hard to crack art world. She first established a studio in Mandaluyong City and became a regular member of the Tuesday Group of Artists.  She is also an active member of the Art Association of The Philippines and the National Commission for Culture and the Arts.

She now creates art in her studio in Las Piñas, a place she grew up in, fired with her passion to recreate images perceived by her mind. Some of her works focused on religious subjects also tackled by her revered grandfather, like the Crucifixion and Madonna and Child.

Her upcoming joint exhibit with Dranreb Belleza, “Awakening,” however, will show how the artist’s inspiration has been roused, giving wings to her creativity and allowing her to step out of the shadow of her abuelo. A true Manansala – her art is bold and daring, willing to break barriers to create something beautiful and astonishing.

Dreamy visions of butterflies and flowers jump from her painting “Change, Hope, Live.” Juxtaposed shapes of mangoes in varied shades of green, yellow and orange are featured in “Mangoes.” In “Duck, Duck, Goose,” doe-eyed figures peer from the canvas.

Khristina’s works can today be found in private art collections in the Philippines and abroad. She has participated in numerous exhibitions nationwide as well as in Kuala Lumpur, New York, and Cologne. Her works have been published in the coveted book “The Great Themes in Philippines’ Art: Mother and Child” by the late Manuel Duldulao.  They are also featured in GSIS Art Collections, and Filarts’ “Palettes: Feast of Colors.”