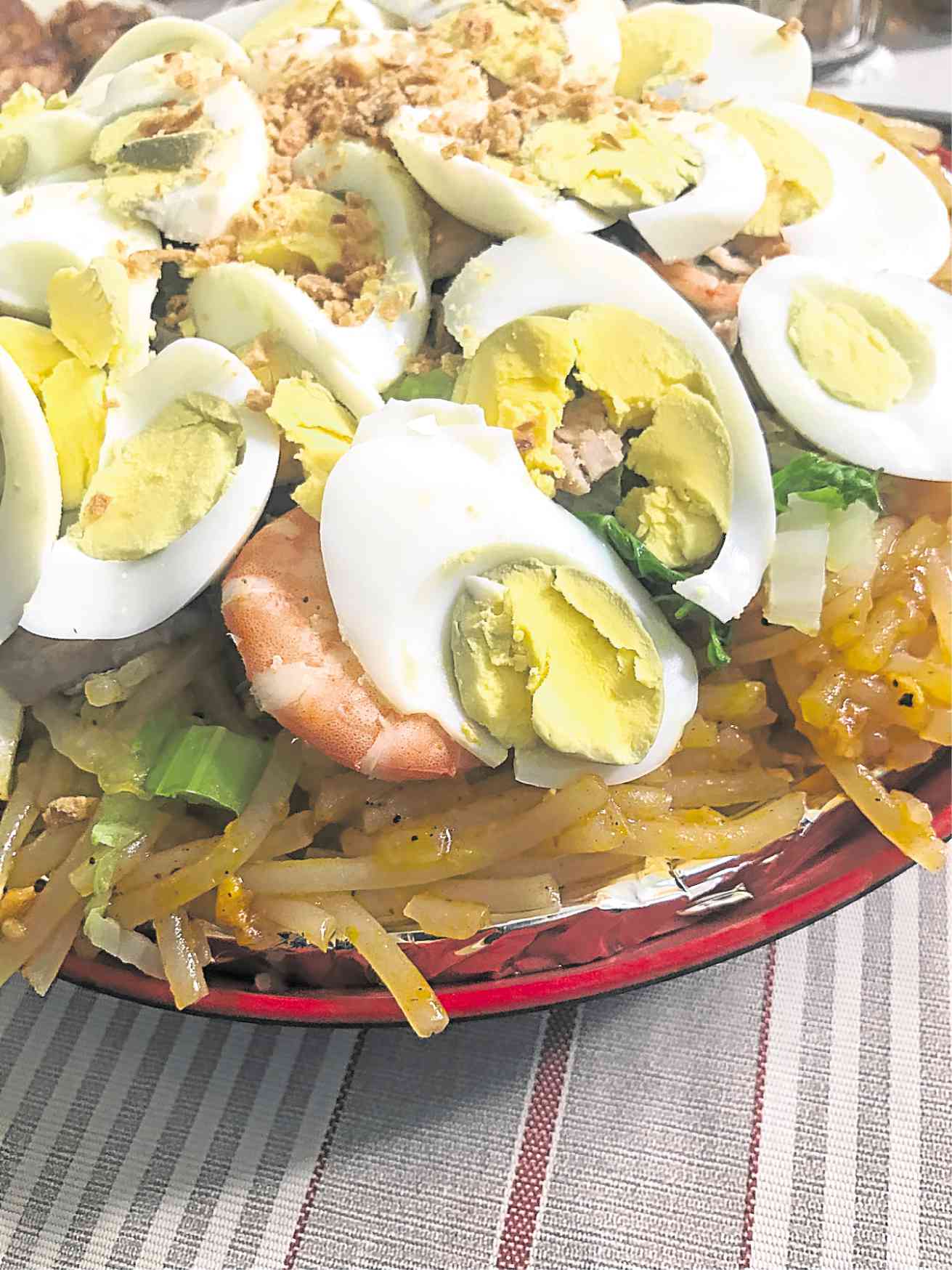 There’s more to Malabon than patis and pancit. This I learned from the first lady of Malabon, Melissa Sison Oreta.

Its food is engraved in the city’s culture and lifestyle.

“There was a time, during World War II and a little after that, when people weren’t really known by their last names but by their specialties,” she says. “Like the Pablos of Dampalit who are known for their adobo. Back then, people would say, ‘punta tayo kina adobo. Or kina menudo.’ All households cooked good food, typically those that require lots of rice.”

Married to Malabon Mayor Lenlen Oreta for four years now, Melissa has taken on the responsibility of promoting its tourism. And what better way to go about it than with food?

She’s a chef, although she has not held that job for some time. She introduced us to the Malabon Tricycle Tour, which takes guests to different food spots in Malabon, managed by second- and third-generation families.

With narrow streets and over 5,000 tricycles in the city, the tour is an ideal and novel concept that ties everything together and benefits local businesses.

The project was launched in March 2015, following the heritage tour begun in December 2014. Since then, the tour guides have been busy bringing around guests from here and abroad to various eateries.

Malabon’s traditional dishes have rich history. Take Pancit Malabon. In time for the opening of a city museum, the Araling Panlipunan teachers were asked to study the iconic dish. Their research shows how the humble food has come to represent the people of Malabon.

The noodles are of Chinese influence, the color and toppings influenced by Paella Valenciana of Spain.

And since Malabon is a coastal town, the original Pancit Malabon was rich with seafood, particularly  squid, shrimp and oysters.

Malabon restaurateurs cherish the value of their prized fare. Many of the old establishments have no plans of franchising or expanding, lest the quality of their specialty suffers. Says Net Cruz of Nanay’s Pancit Malabon: “Ayoko ng sakit ng ulo.”

Some limit their offerings per day, giving them some exclusivity.

The Lugaw Xperience (12 A. Bonifacio Street) has the cleanest-tasting arroz caldo that side of town. No bouillon is used— ginger and chicken parts are simmered for hours (no onion or kasubha even), providing pure flavor. It is a business run by Renan Pangan who took over his mom, Narcisa, in 2004.

His mom used to serve pork chop and fried chicken as well, but Renan learned how to prepare only the arroz caldo from her. He stuck with it and got everyone—rich and poor— queuing under the sun for an P11 bowl.

Melissa says the best way to eat this lugaw is to have a condiment of fish sauce, calamansi juice, black pepper and red chili.

Renan cooks only two huge pots a day and starts serving at 10 a.m. By noon, he is done.

Right next door is Aling Mely’s Carinderia that has been serving home-cooked Pinoy food since 1965. Like in many streetside shacks, you point at the dish you like, then sit down, eat the food, and pay after.

At Aling Mely’s, choosing the dishes is a challenge because they’re all tempting. The best-selling mechado uses real tomatoes (not tomato sauce) and has no vegetable. The almondigas is fist-sized, not swimming in misua and patola broth. And the lengua has no cream and is studded with boiled quailed eggs.

Be sure to leave space for the famous crispy pata at Jamico’s Restaurant, formerly Judy Ann’s (201 Gen. Luna Street).

Named after one of the owner’s daughters, the fried pork leg has a subtly sweet flavor—it is said (the owners don’t want to confirm) to have been boiled in pickling liquid before it is dropped in hot oil.

The story goes that the patriarch, Remio Antonio, would  come home from work with  crispy pata for his family. But the skin already lost its crunch by the time it was served, so he cooked one himself. Eventually the demand for it grew in the neighborhood.

There are many restaurants offering Pancit Malabon, in and out of the town proper. Nanay’s Pancit Malabon (37 Gov. Pascual) has been among the most well-liked in recent years.

Before opening the restaurant in November 1984, “Nanay” Remedio Cruz cooked pancit for office parties and school snacks. It went on for two years until she and her family were offered a space, where they set up a restaurant two tables and eight chairs.

Net Cruz, who took over the business, follows this recipe.

On a regular day, they use up 30 kg of noodles, but for the Christmas season, they cook more than double that amount.

If you still have room in your tummy, there’s Upeng’s Quekiam (C. Arellano Street).  It’s filled with singkamas, either fish or chicken, a healthy departure from pork, which they also have. It comes with a slightly thick sweet brown sauce.

If you miss it—they make a limited number—you can go to the Concepcion Market, where there’s  a delicious and just-cooked ukoy made with hibi and kalabasa.

Just before 2 p.m., head to Barangay Flores for a bag of Aling Tessie’s Triangulo Valencia—turon filled with saba banana,  langka and biko pinipig in thin wrapper, folded into a triangle, then cooked until golden brown and cloaked in caramel.

A dispute over the brand caused the conflict, and while all of them offer the same delicacies (puto, biko, kutsinta, etc.), one stands out and remains true to the formula Aling Dolor used—The Original Dolor’s Kakanin (Escanilla Street).

If she’s not up early to check the mixes of the sapin-sapin, she checks on the quality of the ingredients coming from different parts of the country—rice from Bulacan, glutinous rice from Palawan, sugar from Negros, and coconuts from Batangas and Quezon.

To distinguish The Original from the rest, look for the red box.

For decades now, there has been only one brand people from Malabon have relied on for cakes and pastries—Betsy’s Cake Centre (10 Rizal Avenue).

Betsy David, with daughter Bessie del Rosario, has taken over her mom’s Women’s Club Bakery by opening her namesake pastry shop in 1958. Almost instantly, the shop became known for the Betsy rolls, later on for celebration cakes, delicacies such as camachili and mamon tostado, atchara like ampalaya and dampalit, and savory dishes such as fresh lumpia made of green beans and fried kamote, bopis and bangus tocho.

One of the baked goods you shouldn’t miss—good pasalubong—is the broas, not the dry toasty kind, but a pillowy chiffon cake sandwich filled with buttercream.

It used to be cake-size puto, which Hazel turned into smaller portions. Hazel’s Special Puto (107 Gen. Luna), a brand she registered in 2000, makes 1,000 combined puto a day—topped with salted egg, puto pao has asado filling.

At the corner of Hervacio and Sta. Cruz Streets is a shack that’s been luring people with  its holiday treats—bibingka, puto bumbong—but you shouldn’t leave Malabon without trying its Christmas delicacy,  puto sulot.

At the Marie Anne Pidac Stall, they steam the three-day-soaked glutinous rice until tender, then top it with coconut grated on the spot and sugar. The dessert is not as congealed as suman but has a lovely grainy texture in the mouth. It is served with salted egg and a cup of warm tea.