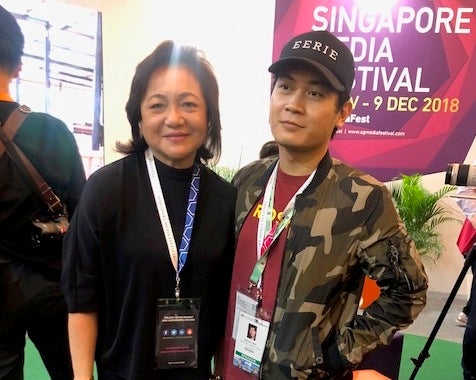 Malou Santos of Star Cinema and award-winning filmmaker Mikhail Red, whose new movie will have its world premiere at the Singapore International Film Festival now running till Dec. 9.

SINGAPORE—The Philippines is the country of focus (CF) in this year’s Singapore Media Festival (SMF), which will run until Dec. 9 at Marina Bay Sands, bringing global attention to one of the region’s most dynamic film, TV and media industries.

The Philippines was chosen especially since the two countries would be marking next year the 50th anniversary of diplomatic relations.

Also next year, the Philippines would be marking the centenary of its cinema.

Lisa Diño, chair and CEO of the Film Development Council of the Philippines, said that to be chosen as CF by the SMF was “an incredible honor” for the country.

She added that the 100th  anniversary of Philippine cinema would be “a special milestone.”

“We believe that the next best thing for our cinema is to go global and SMF is certainly a great platform… to connect Filipino filmmakers with partners and supporters … in the world.

The special spotlight means that the Philippines is especially represented in the Singapore International Film Festival (SIFF) on its 29th year.

In the official competition, the Philippines is represented by Lav Diaz’s “Season of the Devil” (“Halimaw”), “The Ashes and Ghosts of Tayug 1931” by Christopher Gozum and “Nervous Translation” by Shireen Seno.

Meanwhile in SIFF’s Southeast Asian Film Lab, which holds workshops for aspiring filmmakers of the region, mentor is Raya Martin, named by Cinema Scope as one of the world’s Top 50 Filmmakers Under 50.

Since SGM and SIFF are also a market, formal signing ceremonies were held between Star Cinema and Singapore’s Cre8 Productions for six coproductions.

Cre8 likewise signed a three-production deal with Ursa Pictures of the Philippines.