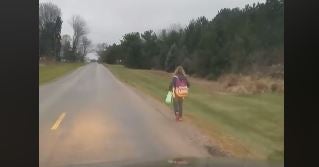 One dad from Bowling Green, Ohio, was not happy over the news of his 10-year-old daughter bullying a fellow student and thought it apt to teach her a lesson of a lifetime.  Matt Cox took to Facebook on Monday, Dec. 3, to share a video of his daughter walking to school while he sat inside the car.

The video has since garnered almost 400,000 shares and 17 million views and showed Cox following his daughter while she walked ahead, carrying her schoolbags. In the video, he can be heard telling his viewers that his daughter had been kicked out of the school bus for the second time this year for bullying another student.

“Let me make this extremely clear, bullying is unacceptable, especially in my household,” said Cox. “Friday, when my daughter brought home her paperwork for her bus suspension she said, ‘Daddy you’re going to have to take me to school next week.’ As you see this morning, she is learning otherwise.”

His daughter walked five miles in 36-degree weather to school, a lesson that may be too much for some parents. But for Cox, it was what he felt was right to teach his daughter and stop her from being a bully.

“I know a lot of you parents are not going to agree with this, but that is alright because I’m doing what I feel is right to teach my daughter a lesson and to stop her from bullying.”

In the end of his video, he told children that they must understand that bullying is unacceptable and will not be tolerated everywhere.

Cox eventually updated his post later on and shared to everybody that his daughter had learned her lesson.

“Lesson learned!” said Cox. “Still has all her extremities intact, is happy and healthy.”

The lesson that he taught her also had a positive effect on her, as he shared that his daughter now has a new outlook on bullying. “As well as a new appreciation for some of the simple things in life she used to take for granted.”  Cody Cepeda /ra