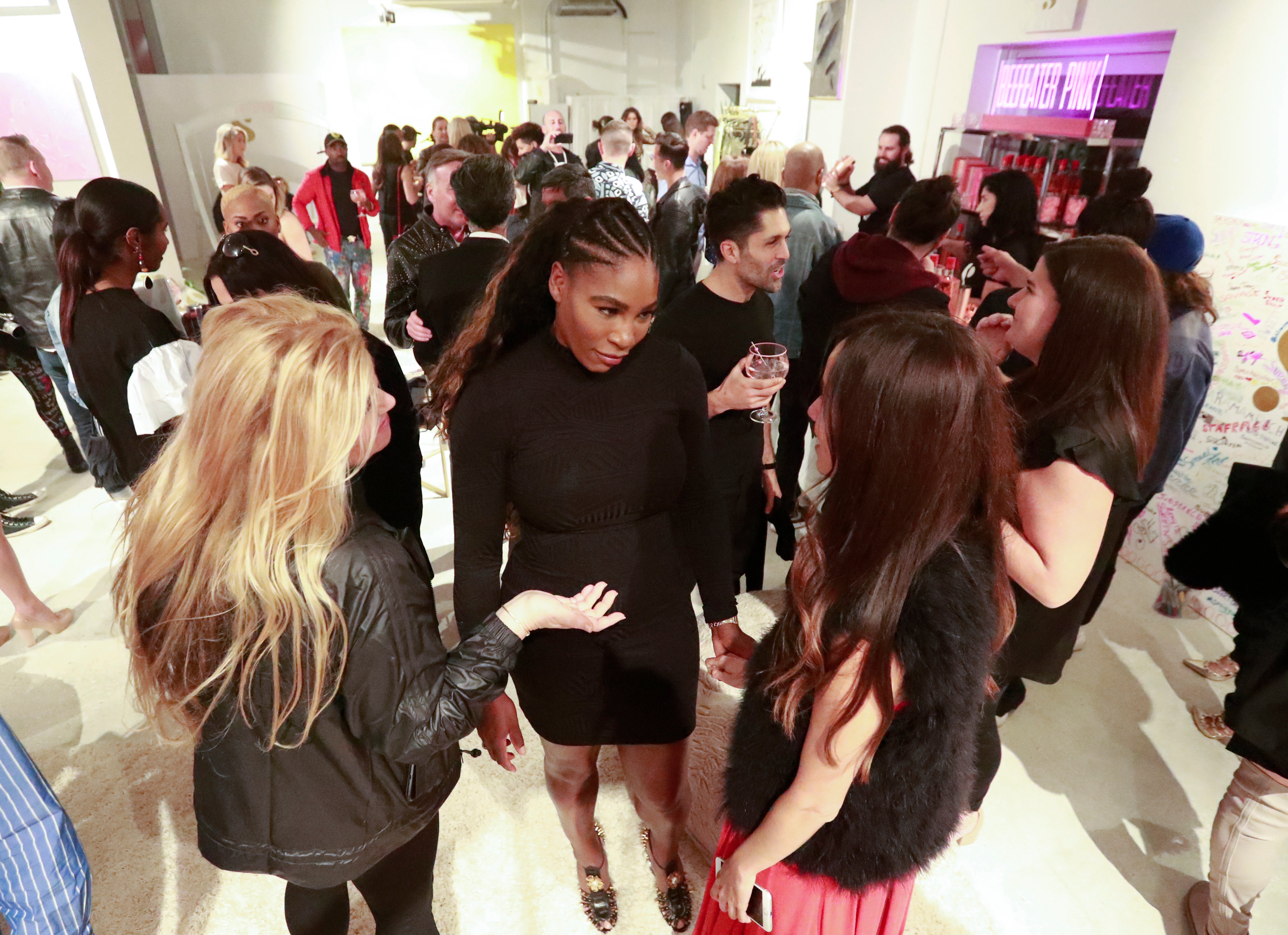 In this, Wednesday, Dec. 5, 2018 photo, tennis player Serena Williams, center, mingles with guests during the launch of her first pop-up shop at the Faena Bazaar in Miami Beach, Fla. The 23-time Grand Slam champion not only designed all the clothing in the shop, but also painted all the art on walls, calling painting her outlet. Image: AP/Wilfredo Lee

MIAMI BEACH, Fla. (AP) — Strong. Sophisticated. Sexy. Like the tennis champ herself, Serena Williams’ fashion line is all about power moves and she’s hoping it will also inspire woman to find their own voice.

“I want everyone to be able to do that and to step into their power,” she said Wednesday night at the launch of her first pop-up shop.

Everything in the line, from a black sequined top with the word “Unbothered” to a crisp, white button-down that says “Slay” in red letters, is under $200.

The 23-time Grand Slam champion not only designed all the clothing in the shop, but also painted all the art on the walls, saying many of the paintings took a month to complete because of their intricate textures.

“I’ve painted for years, probably like ten years now. It’s my outlet,” she said. “I jokingly said I’m going to be at Art Basel one day.”

It’s been an awe-inspiring year for Williams, who said she was “pinching myself, like what the heck am I doing here,” at the Wimbledon final in July after a difficult pregnancy and childbirth.

She said her recent accomplishments on the court helped her persevere through the challenges of being a first-time mom.

Last month, GQ magazine named her its 2018 Woman of the Year, featuring an image of Williams wearing a black bodysuit and Chanel belt. The headline crossed out “Men” and some fans took offense.

But Williams, who has been criticized for being too muscular, too strong and too outspoken throughout her career, said it was “really cool” and just another example of women breaking down barriers.

“This is a strictly men’s thing but they broke and said, ‘Let’s also put a woman on (the cover) because this is a strong woman. She’s just as strong as our men.'”

Art Basel Miami Beach, the prestigious extension of the annual contemporary art fair in Basel, Switzerland, has spawned dozens of other art shows around Miami over the years, along with star-studded parties days in advance.

Bono, Leonardo DiCaprio and rapper Cardi B, fresh from a split with rapper Offset, were all spotted making the rounds Wednesday night. CC

Serena Williams is not here for your sexist comments