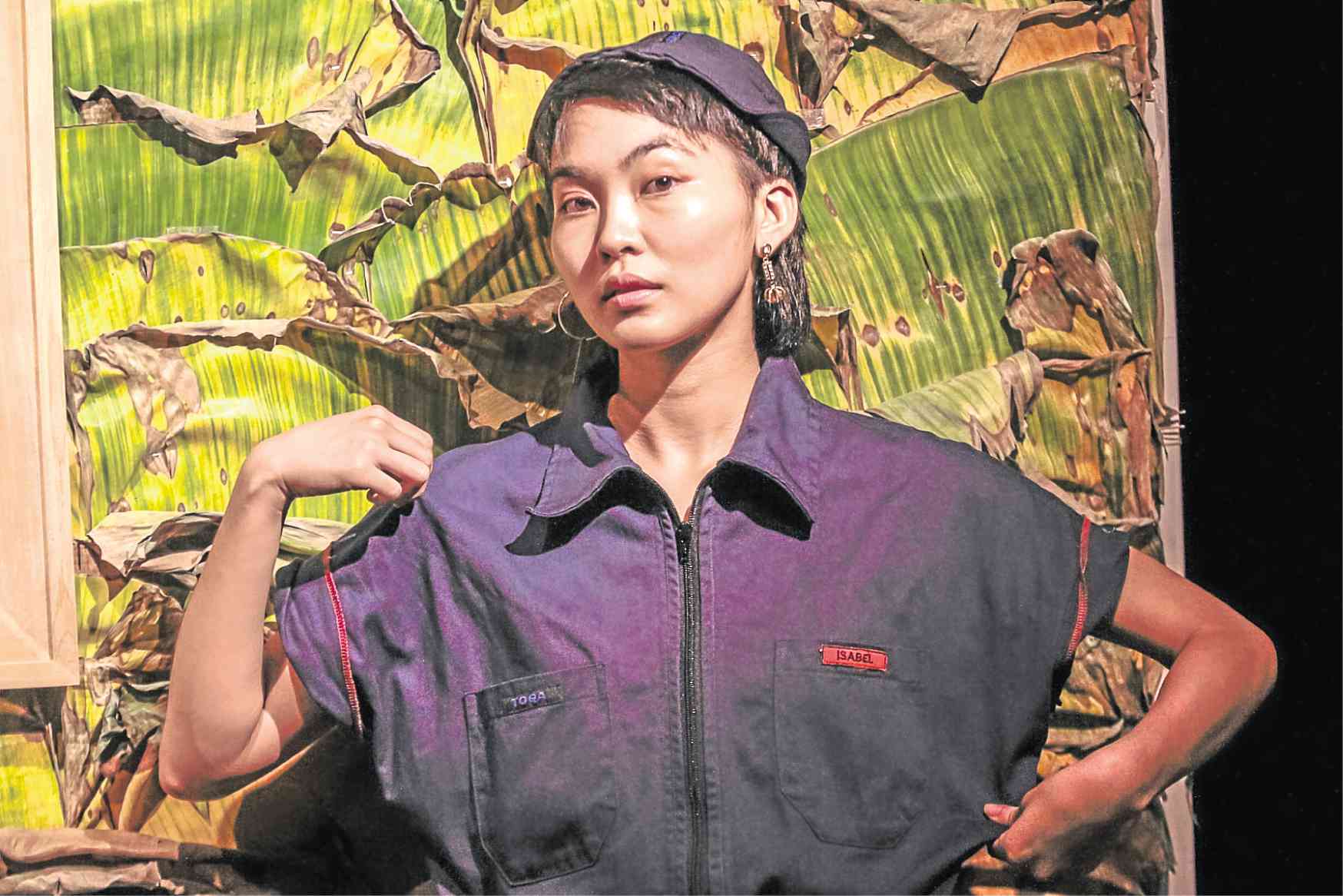 They made their debut in a full-blown fashion show at the Manila Biennale last February, so it makes sense that they unveil their year-ender Manila/Luzon collection at Tarzeer Pictures, Enzo Razon’s cool art space on Pasong Tamo’s gallery row in Makati. (The exhibit ends today.)

But unlike most art/fashion collabs which often amount to nothing much more than putting a master’s artwork on a shirt, with Toqa it’s pretty much baked in the cake.

“It’s more than just clothing,” says Sicat of their pieces, which could be described as funky functional, such as the Toqa trouser: loose-fitting pants with an integrated belt made from a perspiration-wicking material ideal for the swelter of summer, but with a pocket large enough for a smart phone.

“What we’re trying to do is flesh out this idea of what fashion can be, what art can be, and the power it has to interact with different people and bring really important messages to the fore,” she adds.

“For us, a lot of this is about creating a community, a space and an experience because I don’t think art happens in a vacuum. For us it’s very much a medium with which to get a message out.

“This really is the focus, to bring light to the contradictory issues in the fashion industry and to allow all our disparate communities to come together for a solution.”

Environmentalism is a strong component of the Toqa brand. Proceeding from a zero-waste mind-set, they use deadstock fabrics which would otherwise end up in landfills. Scraps and remnants are collaged into high-fashion utilitarian pieces such as cycling jerseys and running shorts. Nothing is thrown out.

The clothes also involve a lot of skilled handwork. In their signature “island pinstripe,” for instance, the stripes are actually tiny rows of pleats that are painstakingly hand-sewn in the dri-fit material.

These come out of Toqa’s workshop, which is sort of an anti-sweatshop: a handful of artisans earn double the garment industry scale for their contribution.

Says Sicat: “We were hesitant to be in the fashion industry in the first place because of all the contradictions and problems it represented in terms of exclusivity and the lack of ethical or moral standards. When we started building this, we wanted it to be a reflection of our different values. We always wanted to be authentic to the things we care about. We care about the environment, which is why we’re doing this with the World Wildlife Fund and not a major retail brand. We care about bringing in people we can work with, so we pay them double the minimum wage.”

“We put value into the work,” she adds. “We share all the secrets to our manipulations because by letting other people in and showing them what we can do, we can expand the world of possibility and allow them to think more about how art and design can be integrated in your life and how messages don’t need to be compartmentalized into one thing.”

“Fashion can be sustainable and environmental and experiential and fun and not scary. I don’t think a gallery should be intimidating, it should invite you in to experience and allow you to come away with your own thoughts on how you perceive the world, how you navigate the world.”

Sicat and Rickard are two of those hyper-achieving millennials you keep hearing about but seldom encounter in the wild.

The two met at the Rhode Island School of Design (RISD) where they bonded over a mutual love of clothes and the fact that both were “island girls” (Rickard hails from Hawaii).

In fact, being “island girls” is central to Toqa’s identity.

“We were definitely talking about our struggles, our identity as island girls [at RISD] and this was how Toqa was born,” says Rickard.

After kicking around the New York fashion world—Sicat with Alexander Wang and Rickard at Telfar—they decided to commit to their “island girl” vision and head for the tropics.

“We could have stayed in New York and worked there, but I think taking all that knowledge and experience back home and giving a fuller view of what an island girl is, what life can be was more appealing,” says Sicat.

“Part of it is making high art and fashion accessible to everyone here, so it’s not just New York or Paris or Berlin where you would expect to be pushing boundaries or expanding world views.”

After just a handful of shows, Toqa generated considerable online buzz, and not just in Manila. Scaling up, however, is not in Toqa’s master plan—at least, not yet.

“We want to be close to the clothing,” says Rickard. “We enjoy being close. It’s not about the money.”

In any case, Toqa certainly bears watching if you’re at all interested in fashion beyond just the clothes.