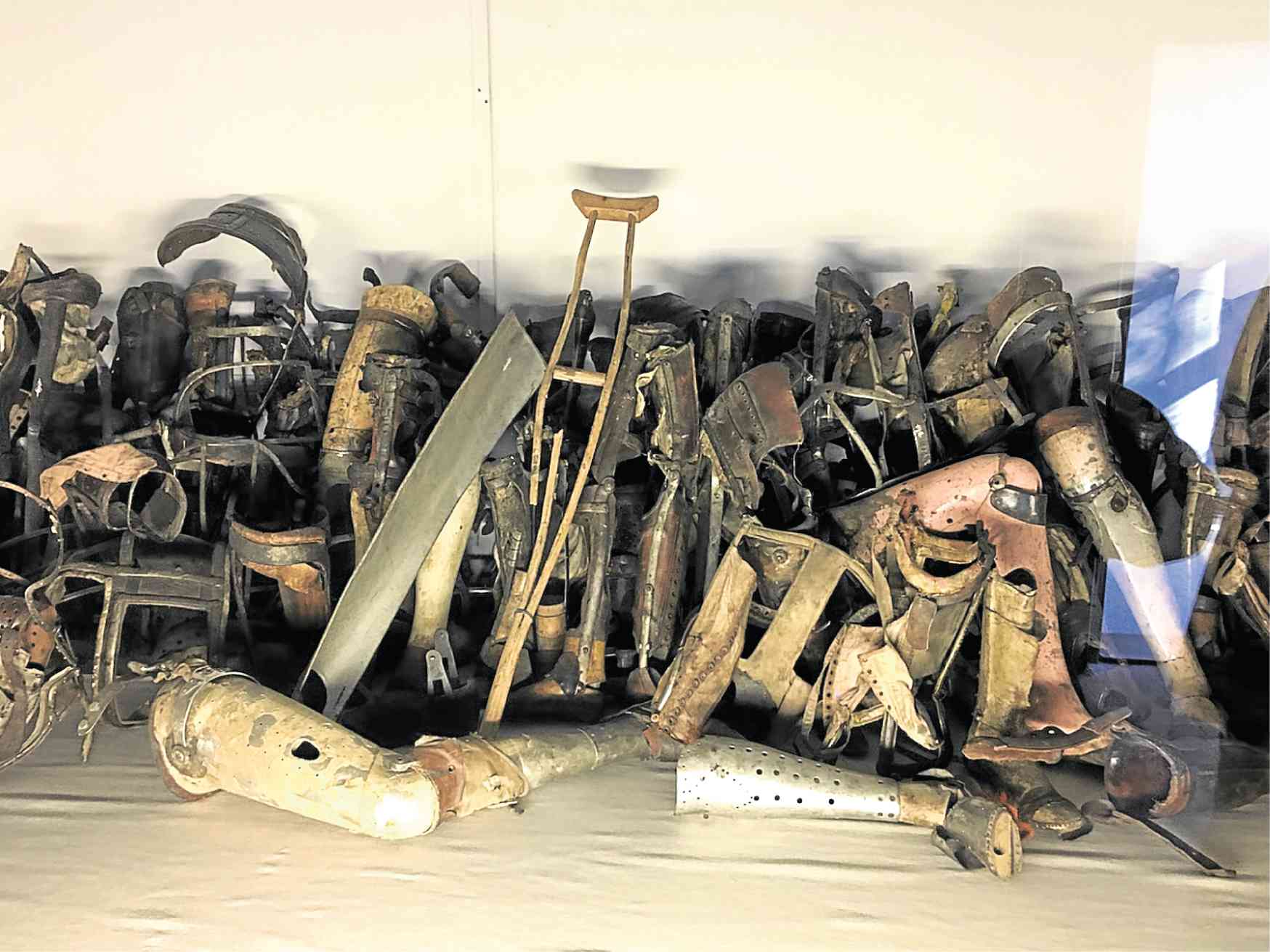 Heaps of crutches and prosthetic limbs left by disabled prisoners

Auschwitz and its monsters

On a gorgeous spring morning, so early in the day that the hotel hasn’t started serving breakfast, my guide picks me up for a long drive to the suburbs. It is the perfect day for a field trip. The sun is shining, but there is a cool breeze. The trees are a lush green and the flowers are in bloom.

Everything is bursting with life, and until I stand before the iron gate with its monstrous motto, I am trying not to think that we have come to a place of death.

Auschwitz is crowded with ghosts looking out of the past with cold, pitiless eyes. If they had been the pale specters from fairy tales and horror movies, it would’ve offered a measure of comfort. We would know to be terrified and run away. There is no comfort to be found here, no consolation or relief. We cannot say, “It happened so many years ago,” or “It won’t happen again.”

People did this to other people. People like us, and buried somewhere in our DNA lurks the capacity for hatred and violence that made this horror possible.

Within the tall wire fences arrayed on both sides of the street like some school campus are the low rectangular buildings where the prisoners were kept. Before they arrived in Auschwitz they had already been stripped of their citizenship, possessions, professions, liberty, dignity. All they had left were their lives, and the tiniest sliver of hope that they might survive.

In these barracks, dozens of them were crammed into airless chambers where they slept in vermin-infested uniforms, on wooden bunks, lying head to foot and jostling for an extra inch of space, breathing disease and kept barely alive on bread and thin soup.

They must’ve known they were in hell. Did they long for death then? Or did life, being all that they had left, seem even more precious?

We walk quietly through barracks that have been converted into museum exhibits. Behind a pane of glass, a mountain of human hair. The Germans took whatever might be useful, our guide Wanda says. This case contains the hair of 40,000 women.

In another window, a pile of rusty canisters. They had contained Zyklon B, the pesticide used to murder the prisoners in the gas chambers. Wanda mentions other methods that were considered for mass extermination. This was the most efficient. A model of the camp shows in detail how the murders were done.

Up until this point I have tried to process the information with my mind. I’d read books, seen documentaries. I am from half a world away. But then in a sunny room, behind clear glass, I see something that makes it personal.

It is a tall mound of eyeglasses, thousands of eyeglasses such as I wear. It is a reminder that even before the Germans rounded up the Jews and transported them to death camps, they came for the educated classes—the teachers, doctors, lawyers, journalists, scientists, philologists, writers, the people who had the intellectual capacity to see the atrocity that was being perpetrated and the ability to mobilize protest.

Fascist regimes always come for the nerds, and eyeglasses are signifiers of literacy. They are worn by people who read books, and people who read books live in their minds and are dangerous. Book readers can topple regimes, and so books are burned, knowledge is mocked and demonized, and readers are thrown in jail.

Heaps of crutches and prosthetic limbs left by disabled prisoners. A mountain of metal plates and cups. Suitcases and valises, the names of their owners printed neatly on their surfaces. The clothes of small children. Thousands upon thousands of worn shoes, and shoe brushes and tins of shoe polish. People wanted to believe that they would live, that surely at some time they would emerge into a decent world where they had to look presentable. Rows and rows of photographs of the doomed looking straight into the camera.

In that room, the criminals who acted as block commanders could sleep on real beds and have larger food rations. Wanda reminds us that there were no Poles in the SS organization that enforced Nazi policies. In that cell, prisoners who had committed infractions were left to starve to death, or to suffocate, or else they were stood up against that wall and shot.

In that brick building, experiments were conducted on human subjects.

In this windy field the transports arrived, sealed train cars full of people standing in their own filth, to be unloaded and sorted into two groups: one to be worked to death, one to be murdered immediately.

Even then the German concern was efficiency—to keep the prisoners calm, they were told that they would undergo disinfection. Then they were locked into the chamber and gassed.

Afterwards prisoners called sonderkommando would bring out the bodies, remove their eyeglasses, jewelry, hair, dentures, prosthetic limbs, whatever could be useful, and throw the bodies in incinerators.

There were so many bodies that the crematoria could not handle the load and open pits had to be used.

Hannah Arendt coined the phrase “the banality of evil” when she covered the war crimes trial of Adolf Eichmann, the Nazi responsible for the transport of millions of Jews to the extermination camps. In her report, Arendt asked whether it was possible to do evil without being evil. She concluded that Eichmann “never realized what he was doing” because he was unable to think from the perspective of someone else.

Arendt’s writing on the “banality of evil” confounds critics to this day: doesn’t doing evil make the doer evil?

But “banality” in the sense of bureaucratic, ordinary dullness seems about right in describing the operations at Auschwitz, where unspeakable atrocities were treated as part of the job. Murder had to be orderly and efficient.

To this day it is shockingly easy for people—“nice,” “respectable,” “normal” people to condone the killing of their fellow humans because they cannot put themselves in these other people’s place. History has taught us nothing. —CONTRIBUTED

“Auschwitz and Its Monsters” is an excerpt from Jessica Zafra’s latest book, “Twisted Travels: Rambles in Central Europe.” Some of the chapters are serious, others are funny, and still others are both. “Twisted Travels” is published by Visprint in cooperation with Discover Central Europe and the Embassies of the Czech Republic, Hungary and Poland in Manila.

The book is now available at Fully Booked branches, shopee.ph, and lazada.com.ph.