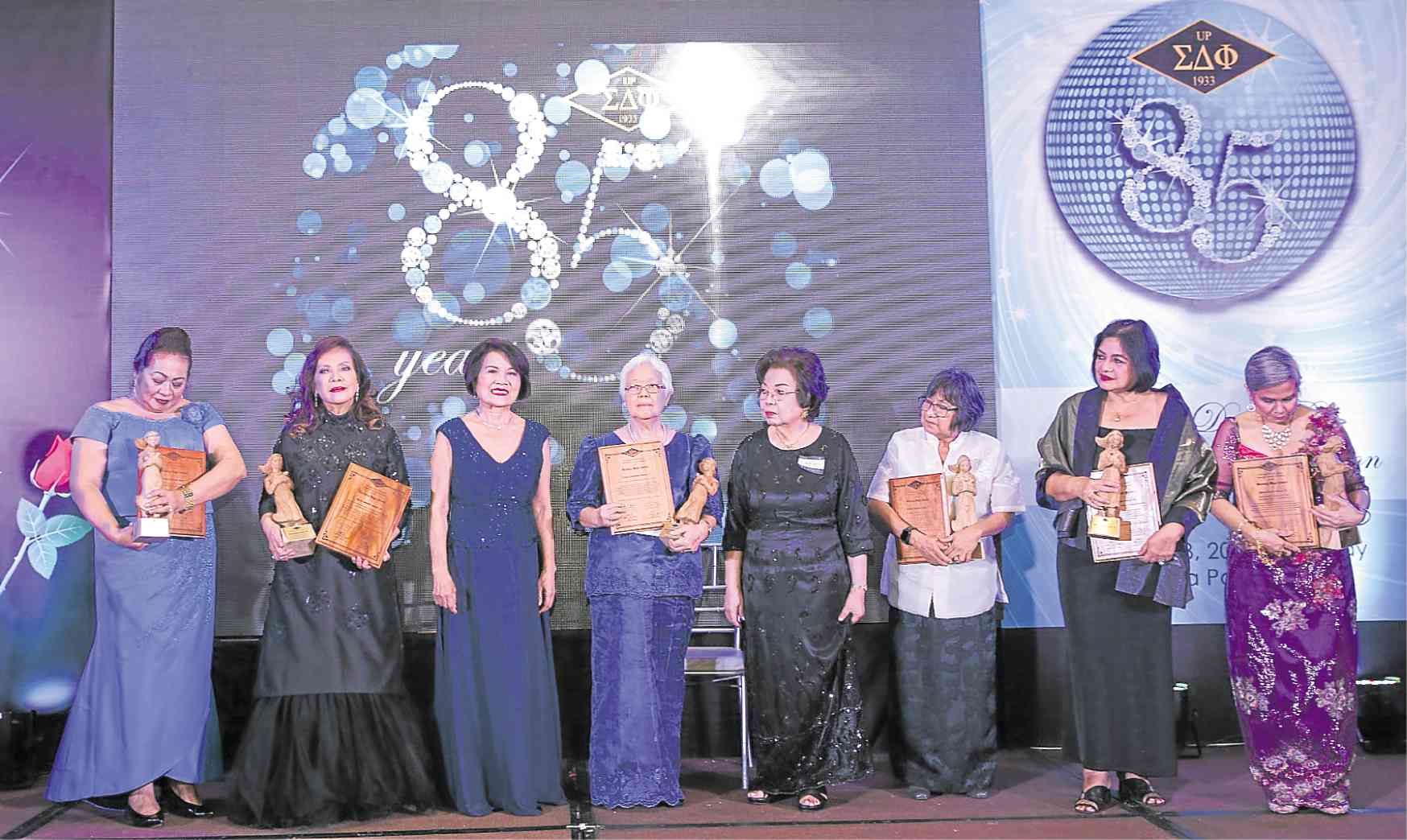 Where would you find over 400 women—ages 20 to 85—happily reminiscing about life on campus and sharing a private hymn, a private “drinking” song, and a shared pledge or commitment to serve school and country?

This was the scene in the 85th anniversary of the Sigma Delta Phi, the country’s oldest sorority.

The sorority had its beginnings in Ann Arbor, Michigan, US. Its Philippine chapter was established by noted judge Lourdes Paredes-San Diego and Gloria Lucero-Monzon on the University of the Philippines (UP) Diliman campus in Quezon City, and later at UP Los Baños in Laguna.

The inspiration for the Awards is film and humanities icon Virgie Moreno, the distinguished poetess who wrote and directed the zarzuela of the same title in the ’50s, with Emma Nepomuceno-Pangilinan (’52) as the leading lady.

In the recent Mariang Maya awarding ceremonies, noted personalities such as Celia Diaz-Laurel, Cota Deles-Yabut, Winnie Collas-Monsod, Sally Zaldivar-Perez, Letty Narciso-Uichanco and Moreno were around either to render a song-and-dance number or just wow the younger set with their presence.

The women averaged 81 years in age, but this did not stop them from showing off their prowess. These are women who excel in various fields, such as economics and the arts. Sigma Delta Phi was also called, with a tone of reverence, the Society of Dramatics and Fine Arts.

The ’60s produced nation builders like Marife Butalid-Zamora (’68), who steered Convergys to the top as the company with the most number of employees and a leader in the BPO industry.

There’s also Nelia Sancho (’68), social activist and founder of Gabriela, the militant women’s organization. They are both Mariang Maya awardees.

The ’70s had a bumper crop of winners in this year’s awards, such as Malu Raneses Raval (’71), chief legal officer at UP Diliman, and Gloria Estenzo-Ramos (’73), who stopped the drilling at the Tañon Strait and fought for environmental preservation. Estenzo-Ramos is an environment lawyer and columnist of the Inquirer.

Not to be outdone, the sciences sector was represented by winners from the Los Baños chapter: Erlinda Seminiano-Paterno and Flerida Arscivals Cariño, who were not just  beauty-and-brains, but were also engaged in left-brain nerdy stuff like soil science and biotechnology, excelling in the spheres of STEM (Science, Tech, Engineering and Math), where women are sorely underrepresented.

The evening turned into a raucous affair as the hours ticked by when the ’60s representatives sang excerpts from famous Broadway musicals.

Staging these made up the main activities of the resident sisters every year until the First Quarter Storm in the ’70s, when campus concerns shifted to political and more relevant presentations by local writers and thespians.

The ’70s, to the millennial generation, had a “reunion” presentation highlighted by innovative numbers.

It was an evening of fun and serious admiration for models of sisterhood, grace, servant leadership, and talent.

This show of talent and recognition of achievements are an inspiration to young girls who must survive a tough and competitive but nurturing environment like UP, or mine hidden talent for nation-building. And that’s what scholars go to school for: to learn and to eventually serve.

I am happy the Sigma Delta Phi has not fallen short of what UP has given all of us. We have returned the favor by cascading our education into service to others, with unwavering loyalty and genuine nationalism.

Young women can easily find their mentors and models from among this lot. They embody the essence of the Filipino woman who is feisty yet purposive, empowered, elegant—and forever in pursuit of excellence in everything she does.