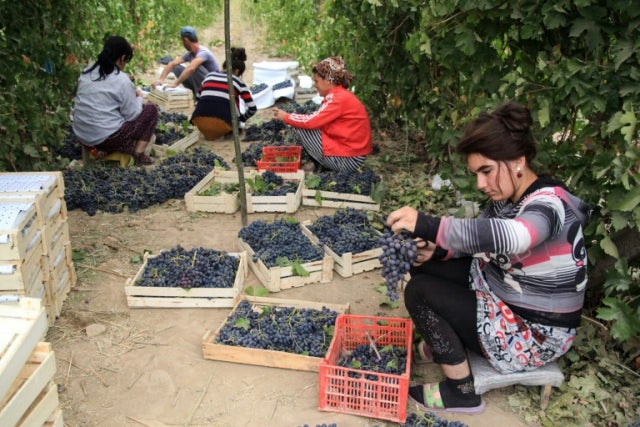 Uzbekistan pulls out the stops for fine winemaking

As the warm, busy autumn becomes a distant memory and winter extends its grip over the Central Asian steppe, Uzbek grape farmer Abdumutal Yuldashev’s harvest is bottled up, bound for Russia.

If once Yuldashev’s 15 hectares (37 acres) of land mostly yielded grapes for the table, now he and his small cohort of workers find themselves on the front lines of an ambitious state-led winemaking drive in the majority-Muslim country.

This season his team harvested Bayan Shirei and Rkatsiteli grape varieties, native to the former Soviet countries of the Caucasus.

But in the future, more internationally-renowned types such as Chardonnay and Cabernet could be the order of the day, if strongman President Shavkat Mirziyoyev’s plan to overhaul the sector bears fruit.

A decree published by the presidential office in February called for a 60-percent increase in the state wine company’s wine exports by the end of 2021 from current levels.

By then too, it also wants the area under cultivation by the company to have doubled.

Mirziyoyev has pledged to unshackle Uzbekistan’s economy, weaning it off its dependence on commodities like the water-thirsty cotton crop that covers the country in swathes, while attracting foreign investors.

The plan calls for the “organization of cultivation of especially valuable industrial varieties of grape seedlings”, including those from France, Italy, Chile and the United States.

However, industry experts have voiced reservations about Uzbekistan’s ability to become a maker of fine wines, while a wine festival organized in the capital, Tashkent, last month as part of the drive failed to pique public interest.

That has not stopped 38-year-old private farmer Yuldashev from already thinking big.

“I want to expand next season by renting some of these other fields,” he said, gesturing across a vista of vineyards stretching towards the foothills of the Parkent mountains, 80 kilometers (50 miles) from Tashkent.

“It seems there is a lot of work ahead,” he told AFP.

For now, local winemaking is still a far cry from the chateaux of Burgundy, and some exports are still limited to the early, unfinished stages in the winemaking process.

At a plant near Yuldashev’s farm, a mostly female workforce dressed in white overalls watches over a conveyor belt turning out bottles of pressed grape juice, all of which will be sent to Russia for refinement.

Gayrat Ashurov, the plant’s director, says 180 local farmers, including Yuldashev, bring their grapes to the factory.

But tax breaks and other incentives for wine producers set out in the presidential decree are designed to phase out exports of raw wine and strengthen grape-to-glass operations.

In addition to other former Soviet countries, Uzbekistan is eyeing markets in Europe and China.

Vodka rather than wine

Nearly three decades after the breakup of the Soviet Union, Uzbeks are still more likely to drink vodka than wine, while Islam’s growing role in society is a threat to both.

Yet, promoting wine domestically is important for any country with export ambitions, according to industry experts.

“It is sometimes difficult to sell abroad if you can’t show that the stuff is popular at home,” said Kym Anderson, executive director of the Wine Economics Research Centre, at the University of Adelaide.

Climate will be another potential hurdle, he said, as Uzbekistan sees more extremes than traditional winegrowing countries, including the ex-Soviet bloc’s most well-known producer, Georgia.

Last year, Yuldashev told AFP, he was forced to bury his vines as deep frosts gripped the region, a practice Anderson says raises labor costs while risking long-term damage to the plants.

In the summer meanwhile, “temperatures above mid-40s can damage grapes if not shaded appropriately by the leaf canopy,” Anderson added.

While winemaking in Uzbekistan has a long history, it was only introduced on an industrial scale in the 19th century during the Russian imperial period.

The first winery was founded in 1868 by Russian merchant Dmitry Filatov.

But after wine, mostly in its fortified form, emerged as a relative staple of Uzbek production during the Soviet era, output took two massive hits.

Firstly came the anti-alcohol campaign of Soviet leader Mikhail Gorbachev in the 1980s that attacked the production of spirits across the Soviet Union.

Then independence and the economic straitjacket that defined Uzbekistan under Mirziyoyev’s long-presiding predecessor and mentor Islam Karimov further compounded the downturn.

Analysts are so far unsure whether the top-down production drive can establish Uzbekistan as a new force in a relatively crowded international wine market.

“Uzbek wine, at least in the short term, will not compete with established fine wine from the old and new world,” he said. NVG

In China’s Himalayas, a wine ‘flying above the clouds’