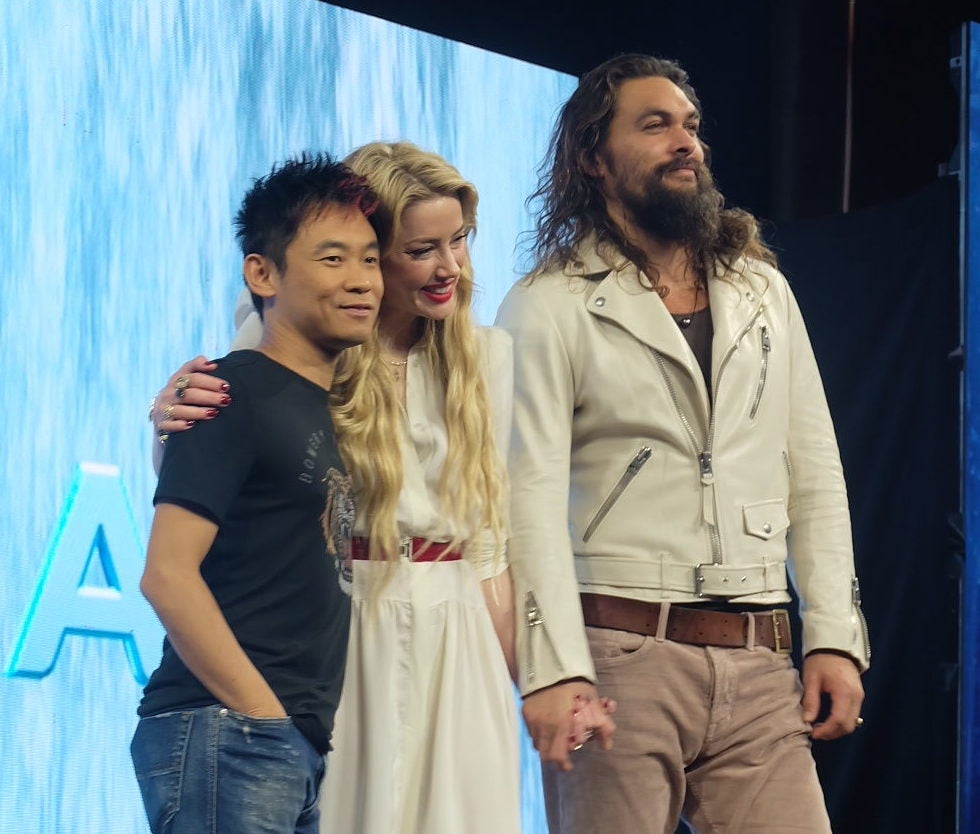 “As far as I’m concerned, the Philippines is the tenth island of Hawaii. We’re basically family so it’s an honor to be here,” said Jason Momoa.

The actor, who played Khal Drogo on “Game of Thrones” is in the country along with co-star Amber Heard and director James Wan to promote their film “Aquaman.” Manila is one of nine cities they will be visiting on their four-continent tour. The three have a fan event and screening scheduled at the SM Mall of Asia on December 11.

“Aquaman,” which opens in the Philippines on December 12, has already made $107 million during its blockbuster opening weekend in China. It will be released in the United States next week and other parts of the world later this week.

The action-packed film explores Aquaman’s origin story. Jason plays half-man, half-Atlantean Arthur Curry. Arthur—yes, Aquaman—has to straddle his two worlds, something both Jason and James can relate to. James said, “I grew up in Australia so culturally I am from two separate poles and I think for me, growing up, you kinda push one aside and you embrace one more but I realized as I got older that I’m embracing my other side just as much. I think that is something that we’ve worked into the script, into the story. A hero who is from two separate worlds and doesn’t quite feel like he belongs in the world but what he ultimately discovers and realizes is he’s the best of both worlds and he ends up embracing his identity. Jason has the same sort of feeling as well.” 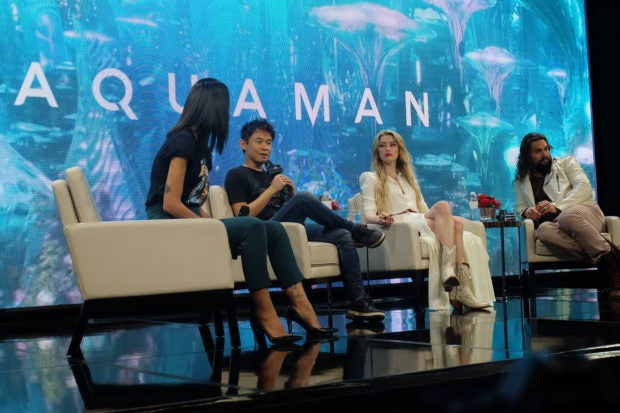 Amber stars as Mera, Aquaman’s fierce ally. “Mera’s a warrior, a princess, but that’s just a title. She’s (an) active, driven, strong, badass, kickass, tough, intelligent warrior who just happens to be, yes, a woman. I love that about her. I love that she’s those things and is truly a kickass superhero on her own.”

Shooting the action sequences and the underwater scenes were a big challenge. Both Amber and Jason went through five to six hours of training each day to prepare for their roles. James said, “It wasn’t very easy to do, it wasn’t very pleasant for my actors… We have an army of the best talented visual effects team to come in to do the amazing hair and costume and environment. It took a big team to create all the underwater stuff.” 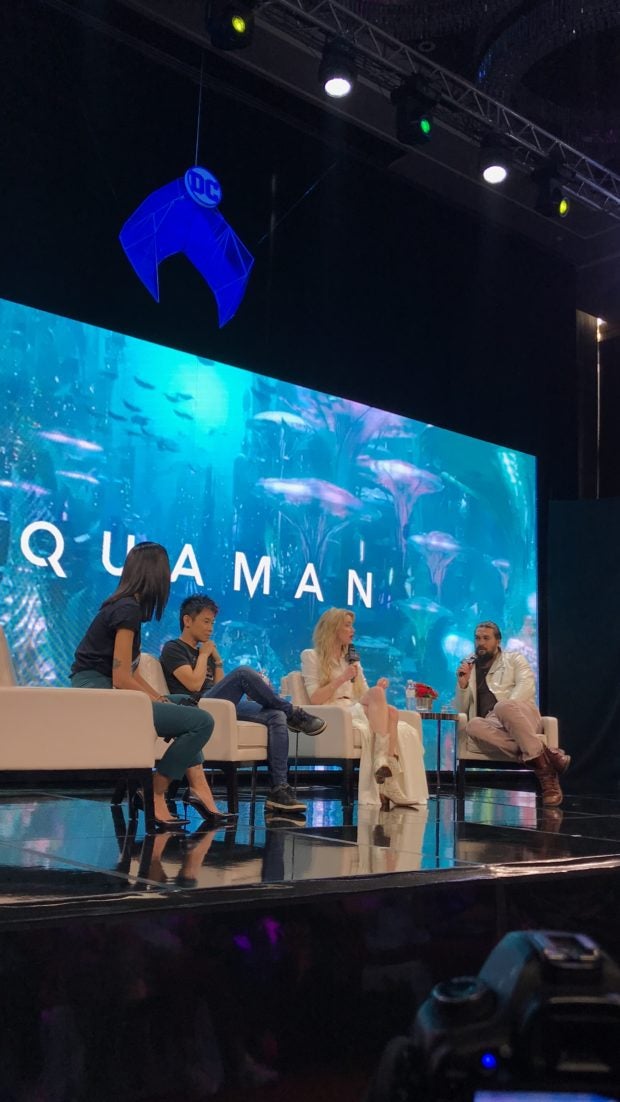 There has been plenty of buzz about Aquaman’s costume and its difficulties. At the press conference at the Grand Hyatt Manila, Jason put the issue to rest by saying, “Yeah, I can go to the bathroom, there’s no problem going to the bathroom.”

Amber’s costume came with its own set of challenges. “It looked so cool and effortless but in reality, it’s the opposite. It’s a skin-tight, scaly, aquamarine vacuum-sealed corseted condom…  It’s as forgiving as you can probably imagine.”

James joked, “My costume was really comfortable, I don’t know what these guys are complaining about. So easy.”

Aquaman is more than just about tight costumes, fight scenes and visual effects. “I want (audiences) to enjoy the movie and go on this crazy fun ride but I want them coming out of the movie realizing that the message of the movie is something that’s very important—family unity, embracing one’s identity and then thirdly, the other message in the movie that I think is important is the message about our environment. I think, I think this is one of the rare superheroes where the environmental aspect of it is at the forefront. I don’t think you can make an Aquaman movie and not touch the environmental message of it all.” 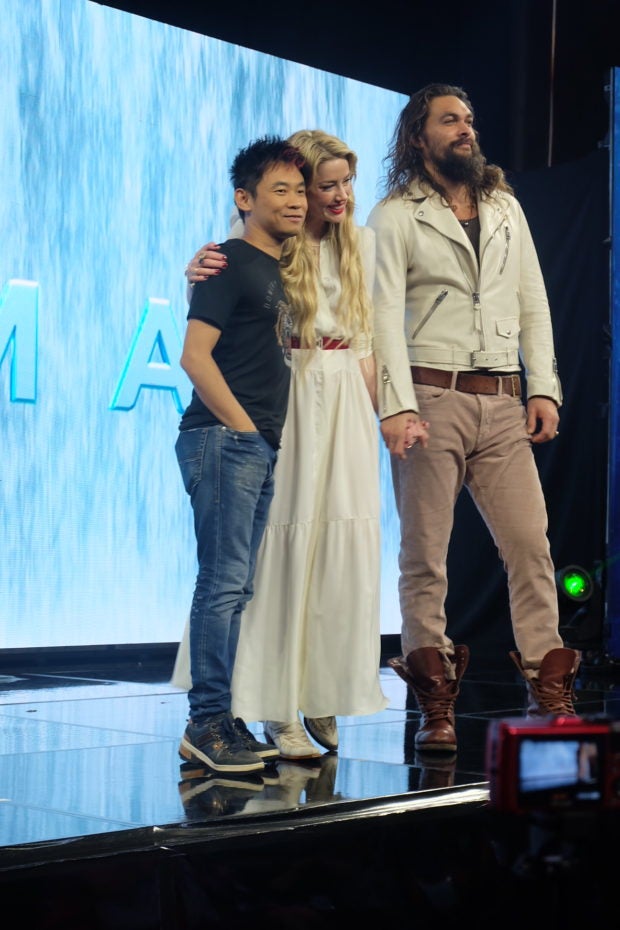 Yes, they’d like to be real-life superheroes. “I never have ever found myself saying I’d like to be more normal,” said Amber.

And while Jason is a hero to his kids, James thinks he’s a hero to… “Maybe my little dogs,” he said. “I have two really cute small dogs.”

“To Annabelle!” someone in the crowd shouted, referring to the evil doll featured in “The Conjuring” and “Annabelle” films that are part of James’ rich horror oeuvre. He laughed.

Even “Aquaman” has shades of horror, said James. “The sequence in the trench is really scary. I would say that every movie I make regardless of what genre it’s in, I learn stuff from it and I carry it on to my next project. What I learned from making scary movies is creating characters that people really care about. That’s super important. If the audience cares about the characters, when they get scared when I put them in these scary situations, you as an audience care about them and you feel the same way that they do. It’s the same approach to this film.”

James’ two dogs aren’t the only ones who think he’s a hero. At the press con, someone stood up and told him, “I want to say that you’re my hero and on behalf of the horror fans of the Philippines, I love you so much. Thank you for creating the best superhero movie ever.”

Is a sequel in the works? “I think we’re all very very excited for it to do well. I think we would all do our best to make that happen,” said Jason.