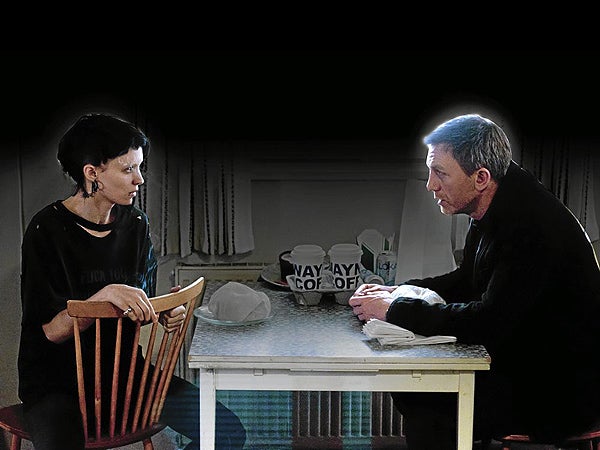 Year of the ‘Dragon’ 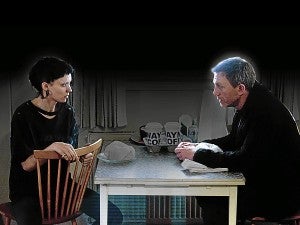 Watching director David Fincher’s “The Girl with the Dragon Tattoo” for the first time is quite similar to getting your first piercing. You go willingly, then are shocked by the violence of the act, before the residual pain leaves you swallowed by a sense of lingering beauty—as well as an additional hole somewhere in your body.

For two and a half hours, Fincher explores some pretty disturbing places in the human psyche with his dark, sharp adaptation of the late Stieg Larsson’s 2005 insanely best-selling thriller of the same title. If ever there was a property that was meant for Fincher, it’s this one. The movie’s weird, Steampunk-meets-S&M opening credits, set to an electronica version of Led Zeppelin’s “Immigrant Song,” are a pretty good indicator of the depths Fincher is willing to go to.  This rabbit hole is lined with bodily fluids, and Alice is packing a taser.

After very publicly losing a libel case, dispirited Stockholm journalist Mikael Blomkvist (Daniel Craig) is roused from his stupor by a mysterious phone call. Brought to the fictional town of Hedestad, Blomkvist is offered a job by reclusive tycoon Henrik Vanger (Christopher Plummer): A lot of money and redemption in exchange for solving the 40-year-old disappearance of Henrik’s beloved niece Harriet. 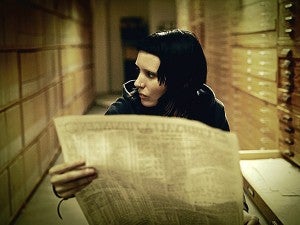 In order to do so, Blomkvist will have to take a very long look at Henrik’s own family. “Soon you will know us all only too well,” Henrik says. “My apologies.” Soon, Blomkvist realizes Harriet’s possible murder is just the tip of a dangerous iceberg.

Blomkvist’s path will eventually converge with that of Lisbeth Salander (Rooney Mara), an enigmatic, pierced-and-inked genius hacker with a genuine dislike for social contact. But she also posseses a groovy super power—the power of super research: There is basically nothing she cannot find. But Salander struggles to survive amid some pretty awful circumstances (“She’s different in every way,” one character describes Salander) but finds direction with Blomkvist and the Vanger assignment.  “Rape, torture, fire, animals, religion,” Blomkvist says. “Am I missing anything?”

While he was nominated for an Academy Award for 2010’s “The Social Network,” Fincher’s body of work is populated by more offbeat fare, such as the raw verve of “Se7en” and the hallucinogenic “Fight Club.” “Dragon” is perfect for him, as he cooks up a smoldering recipe of love and hate, questions and answers with the edge of his earlier work but now with the sleekness of “The Social Network.”

Steven Zaillian’s script condenses Larsson’s dense, delirious novel into a more accessible, more straightforward whodunit. Some die-hard fans of the book will notice some pretty major changes done to the original plot. The changes, sure to be controversial, admittedly work in the context of Fincher’s tightrope approach.

Set and shot in Sweden, “Dragon” is possessed by a bleak, stark beauty that masks the visceral trouble in the heart of Hedestad. Fincher’s scenes are accompanied by a heavy-breathing, digital score from “Social Network” collaborators Trent Reznor and Atticus Ross.

Taking a break from playing James Bond, Craig brings a scruffy, craggy magnetism to the role of Mikael Blomkvist, the renegade journalist built very much in the image of Larsson, the original book’s author. While most of the attention will inevitably be drawn to Mara’s Salander, Craig is actually the adhesive that holds “Dragon” together, connecting Salander to the great performances by an impressive cast including Plummer, Stellan Skarsgard and Robin Wright, among others.

Mara’s transformation into Salander is so thorough it’s almost scary. Last seen as Mark Zuckerberg’s object of affection in “The Social Network,” Mara’s ill-adjusted Salander is both believable and terrifying as a possible good girl to whom very bad things are done, leading to her doing very bad things of her own. Additionally, Mara’s Salander has both a feral aggression and a wounded-animal vulnerability to her that can only be penetrated by Blomkvist. It’s a star-making if also stomach-turning turn for Mara, who will return for the series’ two remaining installments.

Which brings us to the dragon in the room: The violence and the nudity. If classified as a movie, the books in Larsson’s trilogy can easily be rated R-18—and that distinction is matched by Fincher’s movie. There are extremely graphic scenes of all kinds here—the movie will be shown uncut—so abandon all hope, anyone under 18 who wants to watch this. It is seriously for older audiences, and even they may find some scenes discomfiting.

But the queasiness is well worth it, as  “The Girl with the Dragon Tattoo” presents what feels like David Fincher finally unleashed, a movie that isn’t afraid to get all dirty and bloody in order to tell its mesmerizing and maleficent story of life and death told in secrets and scars.

Columbia Pictures’ “The Girl with the Dragon Tattoo” opens in selected Metro Manila theaters on Feb. 1.