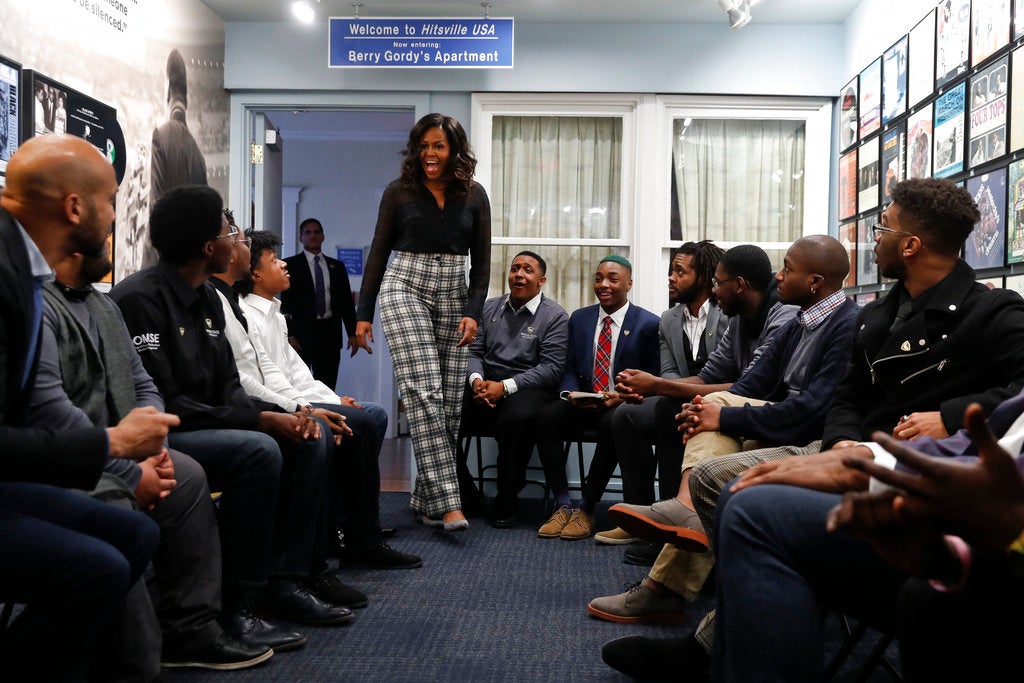 DETROIT (AP) — Michelle Obama surprised a group of Detroit college students on Tuesday afternoon, walking into the Motown Museum as the young men of color took part in a roundtable discussion on education.

The former first lady was greeted with smiles, looks of astonishment and applause after entering the second floor of the building where Berry Gordy created sonic history more than a half-century ago. She hugged her brother Craig Robinson and Keegan-Michael Key, an actor and native Detroiter who moderated the discussion that was organized by Obama’s Reach Higher initiative.

“This was supposed to be for boys only,” Robinson said after they sat down, eliciting laughter from his sister and the more than a dozen students from nearby Wayne State University.

“We’re just talking about education,” Key answered, before mock-asking if it would be OK with them if Obama sat in on their chat.

Obama listened as the students spoke about their experiences in life and school and encouraged them to practice “discomfort” and not be afraid to try new things.

“Universities are looking for and should be looking for a diverse array of experiences,” she said. “People who come from different backgrounds, because if everybody looked the same and experienced life the same way what would these conversations be like? Just a bunch of people agreeing with each other.”

Obama was in Detroit as part of her book tour, which had a nighttime stop planned at Little Caesars Arena, home to the NBA’s Pistons and the NHL’s Red Wings. The tour is in support of Obama’s best-selling memoir, “Becoming.”

The museum is located where company founder Gordy launched his music empire. The label started in 1959, and scores of stars and hits were created before Motown relocated to California in 1972. The label will mark its 60th anniversary next year. NVG