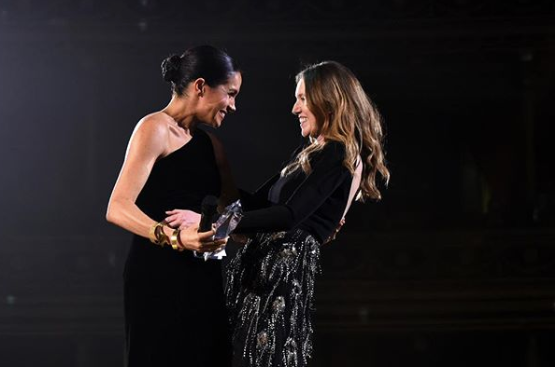 Meghan Markle made a surprise appearance at the British Fashion Awards on Monday, Dec. 10, to pay tribute to her wedding gown designer.

The Duchess of Sussex presented an award to Clare Waight Keller, who was named British Designer of the Year Womenswear for her contribution to the fashion industry.

Keller was behind Meghan’s white silk boat-necked wedding gown that she wore when she got married to Prince Harry in May. She is the first female creative director of French fashion house Givenchy.

Meghan appeared in a black Givenchy gown, a gold bangle bracelet and strappy heels to the London event where she was received with loud cheers. Keller also supervised the duchess’ fitting for the black dress, but Meghan told her that it was for a different event, Grazia reported yesterday, Dec. 11.

Before presenting the award, Meghan gave a message on the power of fashion and kindness, as seen in videos shared on social media.

“As all of you in this room know, we have a deep connection to what we wear. Sometimes it’s very personal and sometimes it’s emotional,” she added.

“But for me this connection is rooted in really being able to understand that it’s about supporting and empowering each other, especially as women,” she said to applause.

“When we choose to wear a certain designer, we’re not just a reflection of their creativity and their vision. But we’re also an extension of their values, of something in the fabric, so to speak, that is much more meaningful.”

She continued: “I recently read an article that said that the culture of fashion has shifted from one where it was ‘cool to be cruel’ to now where it’s ‘cool to be kind.”

“To that point I feel specially proud to announce tonight’s winner who yes, is a British designer, leading on the global stage with vision and creativity but also with incredible kindness which is why when I met her for the first time 11 months ago, I knew that we would be working very closely together.”

Meghan and Keller shared a warm embrace onstage before she handed her the plaque.

Backstage, the creative director told Grazia about what it was like to secretly work with Meghan on her wedding gown. “It’s just been so spe­cial to work with some­one who’s in­cred­i­bly gen­uine and kind. [Meghan] has re­ally embraced the type of style that I em­body. It’s been an in­cred­i­ble year for her.”  Niña V. Guno /ra