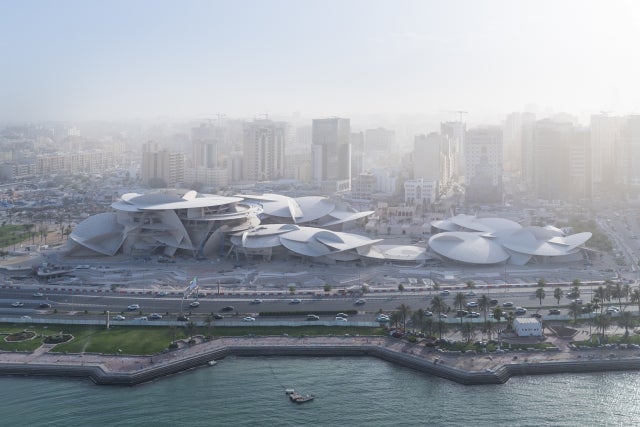 Estimated to have cost $434 million (380 million euros), the French-designed museum in the shape of a desert rose was first due to open in 2016 but is now set to start welcoming the public next year.

“It has been delayed before, we’ve had a big push this last year and it’s very important to the whole team to now reach the end of this journey.”

The museum was designed by French architect Jean Nouvel, who was also responsible for the Louvre Abu Dhabi.

Exell, who described the project as “hugely ambitious”, said the desert rose design was groundbreaking.

“It has given Jean Nouvel a basis for a new method of constructing art space,” she said.

When open, the museum will contain works from local, Middle Eastern and other artists.

Its more than 1.5 kilometers (0.9 miles) of gallery space will focus on Qatar’s past, such as its history of pearl-fishing, as well as the present of the energy-rich Gulf state.

“This is a museum that narrates the story of the people of Qatar,” said Sheikha Amna bint Abdulaziz bin Jassim al-Thani, the museum’s director.

The museum will contain permanent, audio-visual and tactile exhibits, and also stands on the site of the ruling al-Thani royal family’s former palace, which has been restored as part of the massive project.

Qatar’s national museum is the latest high-profile gallery and building to be built in the region in recent years, where an architectural arms race between wealthy competing Gulf powers is taking place.

Doha’s Museum of Islamic Art, where officials were speaking on Monday, opened in 2008.

The cultural rivalry comes at a time when Qatar and its neighbors are locked in a divisive regional diplomatic dispute. NVG

The Super guide to the National Museum of Natural History