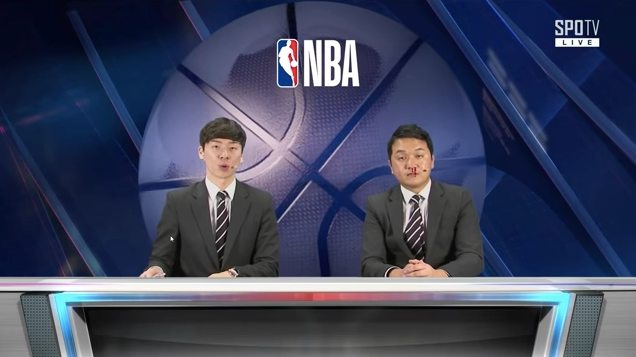 The Golden State Warriors made history on Dec. 5 after they defeated the Cleveland Cavaliers, 129 to 105. What Korean viewers of the NBA game will probably remember, however, is not the game itself — rather, the nosebleed that one of the basketball commentators experienced while doing his task on air.

Hyun-il Cho and Chan-woong Park of SPOTV were discussing the results of the match when Cho felt something amiss with his nose, as reported by Dispatch and Record China via SoraNews24 yesterday, Dec. 13. The video of the incident immediately went viral on social media.

Cho can be seen using his right hand to check the warm discharge trickling down his nostrils. He remained nonchalant upon his bloody discovery, opting to be professional.

His partner Park was unaware of what was happening. He turned to his left to look at Cho, at first not noticing Cho’s medical emergency.

When Cho looked his way, however, he was taken by surprise. Park did a double take to make sure of what he saw. He can then be seen casting a look presumably towards someone behind the camera, before proceeding to continue with their analysis of the game.

After the incident, some speculated on the state of Cho’s health, wondering if the commentator was working too hard, the report said. Cho immediately addressed the rumors, stating that he was not overworked and that he is in good health. He also shared that it was his first time to experience a nosebleed.

Nonetheless, it did not stop Chinese and Korean netizens from giving their two cents on the matter. The incident garnered mixed reactions, with some finding it amusing, as per report. One even went as far as to ask if Cho experienced nosebleed because he saw a “cute cheerleader.”

Others expressed their deep concern for the commentator. One social media user said the incident was “too scary” for him/her to laugh at.

“Their professionalism was very high,” another netizen said in praise of the professionalism demonstrated by Cho and Park, the report cited. “Even the other newscaster was surprised but kept on going.” Kate Matriano/JB