Sarkozy spoke about depression in the morning; I spoke about hope in the afternoon | Lifestyle.INQ ❮ ❯ 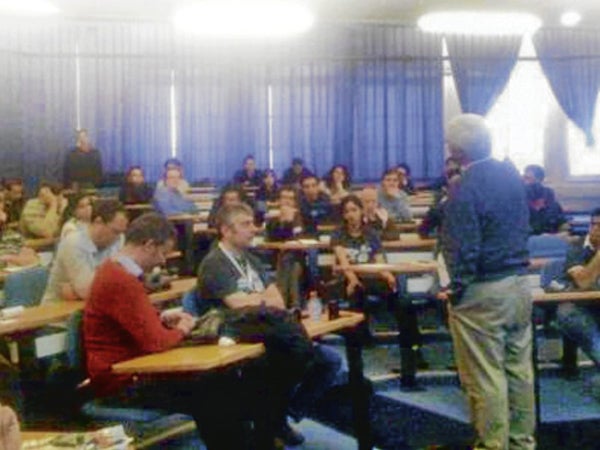 A walk through the village of the English bard in Stratford inspired this piece. Shakespeare is as relevant today as he was in his time, in our search for love in a world where people have grown cold and the climate is becoming abnormally and dangerously warm.

Officially, I’m in England and France on a speaking tour of 17 business, management, and development schools about hope in our bottom-of-the-pyramid initiative called Gawad Kalinga (GK) and its social business offspring, Human Nature.

Our presence was timely, and our cause inspiring to the brightest and the best in top European universities facing an uncertain future in a plundered planet.

The radical optimism of poverty-busters from the Philippines—buoyed by upbeat Asian economies and our trust in our no-nonsense President, Benigno S. Aquino III—served as a contrast to Euro debt woes and Wall Street gloom, due to what some moralists describe as obscene materialism and unmitigated greed.

French President Nicolas Sarkozy appealed for austerity with students at Strasbourg University in a country that invented many global luxury brands. He spoke about depression in the morning; I spoke about hope in the afternoon in the same event.

The mostly young audiences I met were eager to hear about innovations and new horizons in the Philippines as they face a fast changing world where an emerging Asian dragon is offering debt relief to former masters of the planet from the West.

With me in most of our presentations were Joan Icotanim, a UP business graduate representing Human Nature, with a thesis that a social business can be a market leader with affordable quality products and services that create a greater social impact; and Olivier Girault, an executive from Orange Telecom, who arranged this tour of hope out of his great affection for the Philippines.

He shares our vision to create empowered GK communes built on the principle of social justice and social entrepreneurship as the platform for peace, productivity, and prosperity.

Like him, many social entrepreneurs are fascinated with GK’s capacity to achieve scale with its 2,000 communities built to date and its audacious goal to end poverty for five million Filipino families by 2024.

The award given me for GK in 2010 as Social Entrepreneur of the Year by Ernst & Young, Schwab Foundation and the World Economic Forum, and the same award given my daughters Anna and Camille for Human Nature this year, simply affirm that we might be on the right path in creating a template for philanthropy and profit to merge to do the most good.

Caring and sharing as a development strategy and motivation for social business may be difficult to understand in developed economies with a highly competitive and individualistic culture.

But our intentional communities with strong values of honesty, hard work, and hospitality designed for sustainability resonate with many young Europeans who are curious about new ways of creating wealth that are kinder to people and the environment.

Before GK, many of them did not know where the Philippines was on the map. Now it is becoming a popular destination for internship and social immersion, in a cultural setting where Europeans learn to count their blessings.

This year we had over a hundred European interns doing an average stay of six to eight weeks, doing humanitarian service or supporting a social enterprise in a GK village, and a week off to enjoy the white beaches of Caramoan, the rice terraces of Banaue, or the underground river of Palawan.

They dug ditches, painted houses, played with the children, and loved their adopted families, calling the parents Nanay and Tatay.

Thousands more are expected to come soon—we already have a long list of applicants for next year’s summer program.

“The saddest day of my life was coming home to France after learning to be happy in my village in the Philippines.” This was an emotional statement of Florence, a recent French intern at the GK Enchanted Farm, during her presentation at the University of Strasbourg.

Kalinga or caring is simply the mood of the times and the state of the heart.

I use GK to make our brand of caring sound easy and classy to the foreign ear—like CK (for the popular Calvin Klein clothing line). Language, however, was not a problem for me on this trip, since my educated audiences were mostly bilingual and understood English. It was not even a barrier to a teary-eyed French lady at the Startup Weekend at ESCP in Paris who said that she understood my heart, not my words.

Kindness somehow has a language of its own.

This brings me to the goals of my amazing swing across the top campuses of Europe.

First is to let them know about GK as a unique and holistic brand of inclusive development coming from the Philippines which can be a template for other countries, about the power of vision and action, heroism, and massive volunteerism in finding solutions today to yesterday’s mistakes for a better tomorrow.

It is also to tell everyone that this is the best time for Europeans to visit the Philippines to promote friendship and long-term partnership in entrepreneurial spirit. It is best to discover the Philippines early as the rising star of Asia in beauty, social innovation, and hospitality.

It is for young Filipinos in Europe to feel proud that GK is now entering their schools, because Filipinos are quite invisible in the mainstream, although there are many of them around working hard and doing well. I met some who were amazed to hear a Filipino speak in their school for the first time.

I also wanted to encourage Filipinos who have decided to stay in Europe to consider it their home, not just a place of employment; to treat Europeans as family, not just employers.

But most importantly, they must speak kindly and proudly about the Philippines, and encourage employers and friends to share their dream to end poverty and corruption for a country they have not stopped caring about.

I had the most wonderful dinner of beef bourguignon and Bordeaux wine at the plush residence of Babette Aquino Benoit near Champs Elysees. She calls both Paris and Manila home and considers Filipinos and the French as family.

We also had French cuisine in the home of dear Filipino friends Mandy and Elsie with Bernie and Espie as company.

But I topped it with menudo and rice after days of salade and fromage.

In Paris I stayed at the Trocadero near the Eiffel Tower, ran by French CEO Xavier Moraga, with the help of his cousin Pierre. Both are married to Filipinas, work well with Filipinos, and love the Philippines.

Yes, the Philippines has hit rock bottom and we need all the help we can get because we don’t want the next generation to stay down there.

I admire the French because those I’ve met have a strong sense of social justice and a touch of class without arrogance, contrary to their image in Hollywood movies. They are considerate to speak to me in English because they know I have a problem speaking French. I met some of the most inspiring deans, professors, staff, and student leaders in many French campuses and I do not know enough words to say merci.

England was a visual feast in autumn. The English countryside was simply breathtaking and the university campuses in Oxford, Warwick, and Cambridge are incredibly gorgeous. I’m glad this royal gem is home for my three grandchildren, whose father is from Leeds.

In a way, my journey was a thanksgiving to God for this extraordinary Englishman whose generosity and passion for GK inspired many Filipinos to care.

My son-in-law Dylan deepened my love for my country by leaving his comfort zone, his family and friends in England to live in the Philippines.   By loving my daughter, raising his children simply, caring for the poor, and building his social enterprise in the Philippines, he has given a fuller meaning to my understanding of Christianity, humanity, and sustainability.

I am also grateful to Dutch friends from Air France/KLM for making GK their social advocacy and flying me to Europe to spread the good news, and Professor Harry of London School of Economics, who moderated my session and kept me company over sushi dinner (with GK Austria head Jorge Villanueva, who planed in from Vienna) while I was monitoring via Twitter the birth of my seventh grandchild in LA.

My wife Lyn arrived from Manila an hour before our daughter Wowie was wheeled to the delivery room. Lily came after dessert. This whole trip is about her and all my descendants, who include the abandoned and the privileged.

I thanked God for her safe delivery, and celebrated her birth with concrete plans to make her world better.

“My heir to this planet, dainty Lily—pure and fair—by any other name would smell as sweet.”

Tony Meloto is the Founder of Gawad Kalinga and PDI’s Filipino of the Year for 2006.