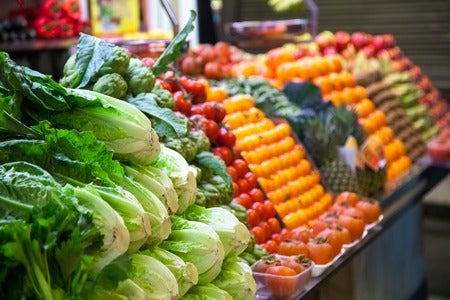 Alohou Papa stands in the middle of the bustling market in Togoville and blows hard on a bright red whistle to catch everyone’s attention.

“It’s 9 o’clock. The village chief is sending me to announce that bartering can now start,” he cries. “No arguing and no provocation,” he tells traders and buyers.

Every Saturday on the northern shore of Lake Togo, some 65 kilometers (40 miles) east of the capital, Lome, Togoville runs a lively traditional barter market. No money changes hands at the small public square, where traders, fisherfolk and farmers from surrounding villages flock to trade their produce.

At “Togossime” — “Togo market” in the local Ewe language — all sorts of goods are swapped but grains, chickens, fish and other seafood are the most popular.

“Togoville is a traditional village,” explains Simon Tovor, special advisor to local chief King Mlapa VI, who is head of the district and whose palace looks down on the dusty streets. “In days gone by, our parents lived off the land and sea. They swapped produce and everyone got along well.”

“We thought it best to keep this practice so we didn’t lose this record of our grandparents and to show to our children how our parents lived,” he told AFP.

In many respects, Togoville — Togo’s former capital which gave its name to the country — seems stuck in time, living according to the rhythm of the lake and the fishing season. It was here in 1884 that king Mlapa III of Togoville signed a treaty to become a German protectorate, well before Togo became a French colony.

Even today, it’s easier to get to Togoville by wooden canoe across the lake than by using the potholed road from Lome that skirts the water’s edge. The village, which is home to some 10,000 people, is well known as a center for voodoo, attracting devotees to study and practice the religion.

Wooden statues and shrines are everywhere. The Virgin Mary is also said to have been seen walking on the lake in the 1970s, spurring pope John Paul II to visit in 1985.

At the market, most business is conducted in the open in the oppressive heat. A few dilapidated wooden structures with rusting corrugated roofs are used as shade.

Others spread out their wares on the parched brown earth. Women in colourful wrappers pick their way expertly through the crowds, balancing large bowls of produce on their heads.

Atsupi Fiodjio has been coming to the market from a nearby village for more than 25 years and sits on a brick selling smoked fish.

“I come every Saturday with two or three big baskets of smoked fish and I go home at the end of the day with at least three sacks of maize, beans and black-eyed peas,” she said.

“I resell them in our market where grains sell really quickly because our people mainly fish. We don’t grow anything,” she added, as a dozen customers looked on.

Sitting on the ground in front of her nearby stall, Jeannette Tenge lets everyone in earshot know about the quality of her fish.

“I only accept grains, especially corn and rice, and of course flour and cassava. Doing this gets me my stocks for the house for the whole week for my family,” she added.

“On other days I sell bread in the village school,” she added, complaining about the lack of shade from the harsh sun.

Togoville’s barter market is one of only a few surviving in the country but it isn’t just about respecting traditions. It also endures out of necessity. About half of Togo’s nearly eight million people live below the poverty line and often complain about increases in the price of foodstuffs. Some don’t always have enough to pay in cash.

“I left the house with some corn and garri (powdery or ground foodstuffs) to come and swap with some fish to prepare at home,” said Adole, a schoolgirl. “I don’t often come to the market. I come when I’m a bit hungry.”

Enyoname said she barters poultry for corn and garri. “I have to do it because I find it difficult to sell,” she explains.

The king’s advisor, Simon Tovor, said bartering also has a practical application, allowing goods to be used more quickly than by selling.

“People in the countryside use this shortcut rather than try to sell their produce with all the risks… (involved in) keeping it fresh,” he added. KM

Bartering for gold and tales in Davao