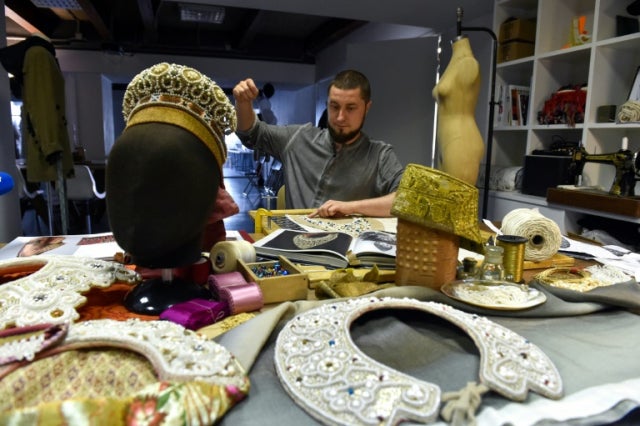 In her workshop in a Moscow attic, Maria Andrianova is using a sewing technique she learnt from elderly women in the forested Karelia region of northwestern Russia.

“For me, sewing is a way to learn about my origins,” said the 31-year-old designer.

She describes her “Masha Andrianova” fashion line as “for the modern world” but uses some sewing techniques dating back to the Tsarist era.

Her flowing dresses, high-necked blouses and pleated skirts are made of natural materials in pale or autumnal colors.

“In Karelia, the locals showed me a way of sewing that I didn’t know about. They had learned it from their mothers, it was like a family secret,” she said, lightly braiding two threads together.

More and more young Russian fashion designers like Andrianova are finding inspiration in traditional sewing methods that have fallen into disuse, seeing them as a way to stand out from the Western brands that poured into the country after the fall of the USSR.

“We don’t want to look any more at what the others are doing in the West,” she said.

“We want to find our own methods, because we also have many traditions and a very rich culture.”

Learning about such traditions could be a way for young Russians to explore further back into their country’s past than the relatively familiar Bolshevik revolution, she said.

Andrianova has taken inspiration from sketches by an ancestor who owned a weaving factory as well as from the life story of her great-grandmother, who headed a dressmaking business. She also learnt techniques from her grandmother, who was born in the Soviet era.

“But I’m not restoring period clothing,” she said. “I’m creating modern clothes that carry Russian history in them.”

At 35, Yukhann Nikadimus decided to devote himself entirely to making kokoshniki — traditional women’s high headdresses that were particularly popular in the 19th century.

Working in a factory that dates back to the 16th century but was renamed after Bolshevik leader Vladimir Lenin in the Soviet era, the tall bearded man carefully embroiders pearl patterns on to canvas stretched on a wooden frame.

While he gets his ideas from period photographs, he insists that his kokoshniki can work in any contemporary wardrobe.

“You could wear a kokoshnik with a modern wedding dress, for example,” he said.

“National dress shouldn’t be something that is fixed,” he insists. “It changes all the time — new techniques appear, you have to incorporate them, it’s a natural process.”

For cultural commentator Ilya Oskolkov-Tsentsiper, founder of Moscow’s Strelka design institute, such a revival of interest in pre-revolutionary dress among young designers was “almost inevitable.”

“During Perestroika (in the 1980s) and the following decades, Russians were fascinated by the West and everything that came from there,” he said.

“Now though we are living in a time of introspection, we are trying to figure out who we are, what shapes our identity and what makes us unique.

“This isn’t just about fashion — it goes a lot deeper. It is connected to design, music and film. It goes beyond politics.”

In the city of Ivanovo, Russia’s center for textile production, 28-year-old Maxim Krylov wants to help young designers learn about their heritage.

He has founded an annual festival called Textile Capital in the town, 300 kilometers (186 miles) northeast of Moscow, aimed at encouraging designers to use traditional fabrics.

“We want to preserve this heritage to be an inspiration for Russian design, to show the globalized industry that we have our own world, a world that’s Russian and local.”

In July, some designers worked with fabrics printed with Soviet propaganda designs found in the archives of Ivanovo factories, Krylov said.

Wearing such clothes does not mean looking old fashioned.

Vasilina Kharlamova, a 29-year-old from Moscow, says she likes clothes that are “linked to (Russian) culture” and has just ordered a dress from Maria Andrianova that she plans “to wear with sneakers in everyday life.”

Such clothes are not to everyone’s taste, she admits, however.

“You have to learn to love these clothes and understand… the past.” CC