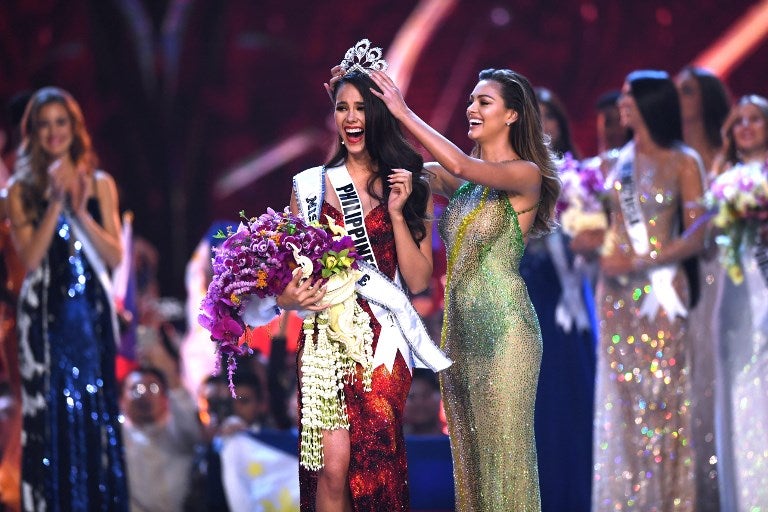 MANILA, Philippines – The victory of Miss Philippines Catriona Gray on Monday’s 2018 Miss Universe competition was not only an accomplishment of a dream, it also marked a completion of the colors of the nation’s flag – white, yellow, blue, and red – in the beauty pageant stage.

Netizens keenly observed that as fourth Filipina winner of the Miss Universe crown, Gray completed the four colors of the Philippine flag with her fiery red, high-slit frock.

“Did you know: The Philippine Flag has four sides and four colors, each of which representing the country’s four Miss Universe winners?” Dizon said in a tweet shortly after Gray was announced as new queen of the universe.

Margarita Moran in 1973 bagged the second Miss Universe crown for the Philippines wearing a white gown while Gloria Diaz, the first Filipina to win in the prestigious beauty contest in 1969, was garbed in yellow.

According to the National Historical Commission of the Philippines (NHCP), the yellow in the Philippine flag are the three stars – Luzon, Visayas, and Mindanao; and a sun, which eight rays represent the eight original provinces of the country.

The sun and stars were placed on a white triangular background that indicates equality among Filipinos, it added.

NHCP also said the blue in the Philippine flag symbolizes peace, truth, and justice; while the color red signifies patriotism and valor.

Gray confidently sashayed the runway and splendidly represented the Philippines during the 2018 Miss Universe coronation night in Thailand. She bested 93 other beautiful women from around the world.

The inspiration for Gray’s evening gown was the iconic Mayon Volcano in Albay, a province in Bicol region where she came from.

But could this really be the end or just the beginning of another cycle of victories for the Philippines in the Miss Universe pageant?  /kga