Catriona Gray: From the ‘World’ to the ‘Universe’ | Lifestyle.INQ ❮ ❯ 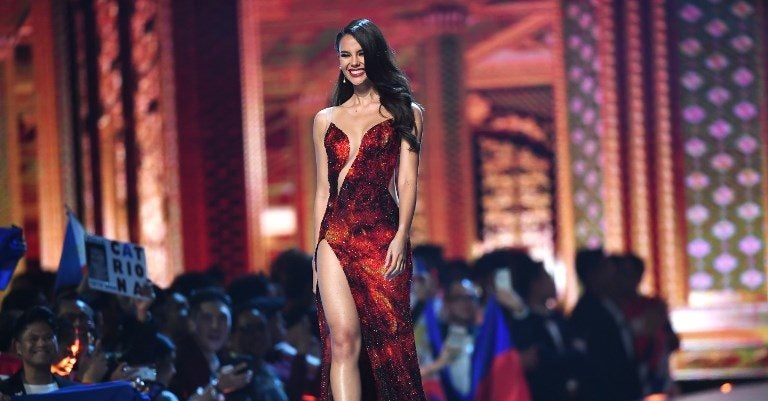 Catriona Gray of the Philippines competes after being selected as top 10 finalist during the 2018 Miss Universe Pageant in Bangkok on December 17, 2018. - Miss Philippines was crowned Miss Universe on December 17 in Bangkok after a trailblazing ceremony praised for featuring its first transgender candidate but marred by gaffes about the English-speaking ability of two Asian contestants. (Photo by Lillian SUWANRUMPHA / AFP)

Catriona Gray: From the ‘World’ to the ‘Universe’

MANILA, Philippines — After Catriona Gray took on the world, she conquered the universe.

The Filipino-Australian beauty was crowned as Miss Universe 2018 on Monday at the Impact Arena in Bangkok, Thailand.

The beauty from Albay started her journey in the pageant world when she joined the Miss World Philippines in August 2016 to represent Albay.

She won the pageant and this led her to join the Miss World 2016 where she finished with a spot at the Top 5.

In March 2018, Gray took a second shot at winning a national pageant by joining Binibining Pilipinas 2018 where she was named Miss Universe Philippines 2018.

Gray made history in the Philippine beauty pageantry as the first woman to be named as both Miss World Philippines and Miss Universe Philippines.

But what makes Gray truly deserving of the crown are the advocacies she has been championing: education for youth and HIV/AIDS awareness.

At 22, Catriona joined Young Focus, a non-profit organization that works in supporting the education, nutrition, and social welfare of the kids from the community that are in their program.

She even released a song dedicated to children living in abject poverty in Tondo, Manila titled “We’re in This Together.”

Gray has also been active in her volunteer work for Love Yourself Philippines, an organization dedicated to HIV awareness, education, counselling and testing.

Catriona Gray released a debut single for a cause