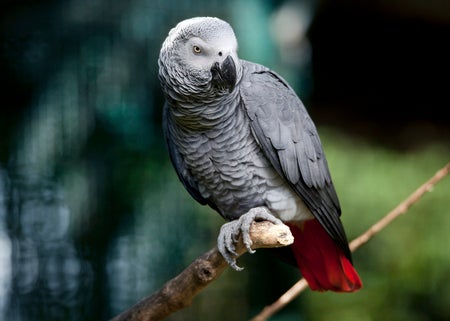 A parrot in the United Kingdom who has quite the notorious reputation has been placing grocery orders through his owner’s virtual assistant Alexa.

Before his accidental online shopping habit, Rocco the African Gray parrot was put up for adoption by the National Animal WelfaTrust sanctuary because it feared his swearing would scare visitors, the Daily Mail reported on Dec. 14.

Rocco found a foster home in sanctuary worker Marion Wischnewski—but even there his chattiness brought some trouble.

The African Gray is a highly intelligent bird known for its ability to mimic words and sounds. When left on his own at home, Rocco figures out that he can “talk” to his owner’s Alexa-enabled hands-free speaker Amazon Echo.

One of Rocco’s pastimes is listing the food that he likes to eat, such as watermelons, raisins and broccoli. Other items he has ordered include ice cream, a light bulb and a kite.

Alexa interprets these as online shopping requests and adds them to the connected account’s shopping cart. Thankfully, a parental lock prevents the items from being purchased and Wischnewski said she cancels the orders when she gets home.

When he can’t get his online grocery shopping done, Rocco asks Alexa to play music, with American group Kings of Leon as his favorite band.  Niña V. Guno /ra