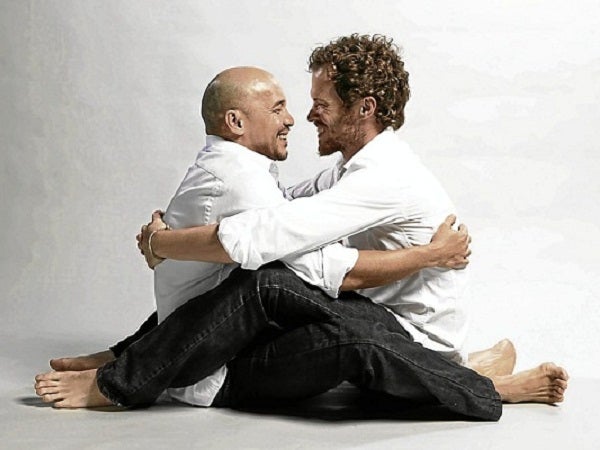 Not just for gay men, fag hags or hypochondriacs

“Next Fall” has got to be one of the most controversial plays ever staged in the Philippines. Not only is it about a pair of gay lovers; the two happen to have opposing religious beliefs, too—one is a Christian and the other is an atheist.

Written by playwright Geoffrey Nauffts, the play chronicles the five-year relationship of Luke and Adam as they wrestle with their respective demons, and even confront them.

It is the year 2005, and after Luke, who is a waiter and an aspiring actor, gets hit by a runaway cab, friends and family gather at a New York City hospital and await developments. His chatty mother, Arlene, gets to know his friends: Holly, an eccentric free spirit who owns a candle shop, and Brandon, a reserved and soft-spoken yuppie.

Luke’s religious and conservative father, Butch, joins the group, and last to arrive is Adam, the hypochondriac candle salesman who Luke’s parents do not know has been their son’s live-in boyfriend for a while now.

The play is full of flashback scenes: how Luke and Adam met (Luke had to give Adam a Heimlich maneuver); how they started a life together as a live-in couple; how Luke had to hide his homosexuality and his relationship with Adam from his father; and how the lovers would argue about religious beliefs. In fact, religion and spirituality are tackled many times, reflecting how, in real life, one’s religious beliefs play a big role in a relationship.

The gay theme wasn’t overplayed; it even seemed secondary to the religious angle of the play. Sure, there were some kissing scenes (there were only five, but they still managed to elicit gasps from members of the audience), but as for the subject itself, there were no lengthy discussions on homosexuality; aww-inducing scenes that gay people could relate to were very rare.

This can actually work for the play. It doesn’t ostracize lesbians and straight people. “Next Fall” is more of a love story of two people who happen to be gay. It’s not really a very gay play, to begin with. Most of the play’s gay aspects are tongue-in-cheek and giggle-inducing.

Not just a love story

The play isn’t just about the love story of the two main characters; it tackles other relationships as well, like the one between Adam and his father, who, just like most fathers, do not want their son to turn out gay; the friendship between Adam and fag hag Holly; and the awkward, tension-filled one between Brandon and Adam (Adam is jealous of Brandon’s past and present relationship with Luke).

While a bit dragging toward the end (there is this part where Luke’s mother yaks inside a church, which could have been skipped), the play may touch on several serious subjects, but it doesn’t get overwhelming. It also helps that it is peppered with funny bits, care of Adam, who is chatty and a source of sitcom-funny lines. It’s as if he was a character from “Friends” or “Sex and the City” who ended up in the play.

All six actors are perfectly cast and they all deliver stellar performances. Bart Guingona is very effective as the cynical and hypochondriac Adam. This is the theater thespian’s comeback, and watching him play Adam will make you feel grateful that he’s back. Michigan native David Bianco plays Luke, and while he is straight (his wife was in the audience during the screening), he portrays the role so wonderfully you’d wish he was actually gay.

Liesl Batucan is perfect as Holly, the eccentric fag hag. Niccolo Manahan was the right choice for yuppie Brandon. Niccolo actually works in advertising, but after this play, there should be a clamor for him to star in more. Juno Henares and Miguel Faustman did a great job, too. Juno was believable as the overly talkative and sort-of-annoying Arlene, while Miguel was, no doubt, the deeply religious, conservative, strict and scary father figure, based on every line and movement.

Directed by Audie Gemora, “Next Fall” isn’t just for gay men or Christians or atheists. It’s for fag hags, hypochondriacs, and those experiencing midlife crisis. It is for people who find love when they least expect it. It is for lovers who don’t see eye-to-eye with their partners. It’s for those who feel under-appreciated by their significant other. It’s for everyone, actually.

Co-presented by the City of Makati, Enderun Colleges and Bellaroca Island Resort and Spa, “Next Fall” shall run until Feb. 5, with shows on Fridays and Saturdays at 8 p.m., and matinee shows on Saturdays and Sundays at 3:30 p.m. All performances are at Onstage, Greenbelt 1, Makati City.