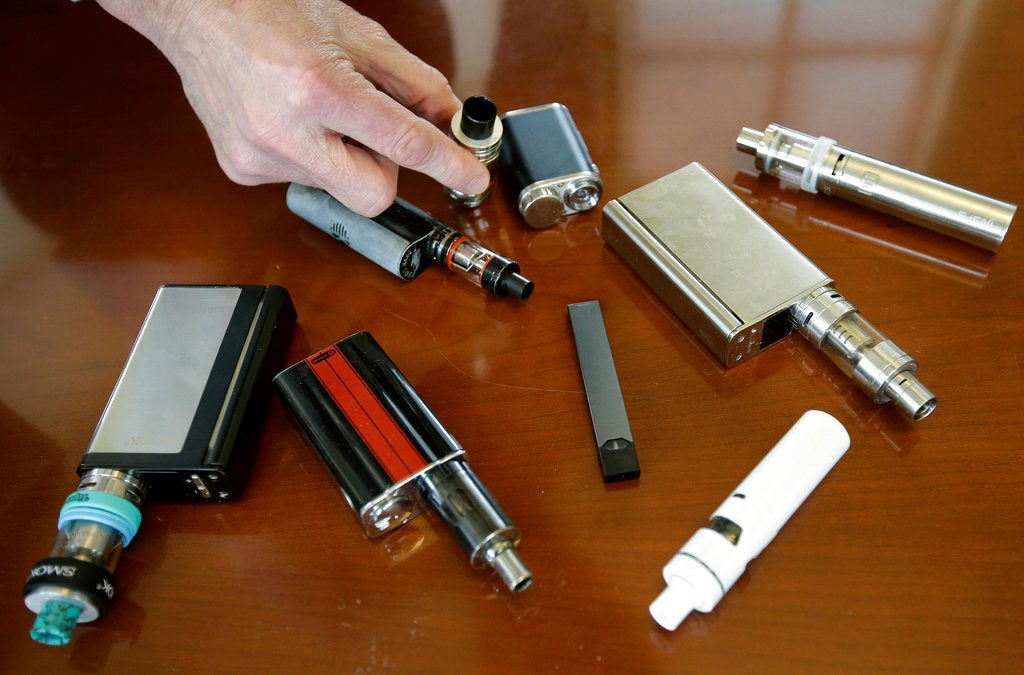 FILE - In this April 10, 2018, file photo, a high school principal displays vaping devices that were confiscated from students in such places as restrooms or hallways at the school in Massachusetts. The U.S. surgeon general says swift action is needed to prevent millions of teenagers and adolescents from becoming hooked on Juul and other high-nicotine electronic cigarettes. Surgeon General Jerome Adams said Tuesday, Dec. 18, that parents, teachers and physicians must take aggressive steps to address an epidemic of underage vaping. (AP Photo/Steven Senne, File)

US surgeon general warns of teen risks from e-cigarettes

WASHINGTON — The government’s top doctor is taking aim at the best-selling electronic cigarette brand in the US, urging swift action to prevent Juul and similar vaping brands from addicting millions of teenagers.

In an advisory Tuesday, Surgeon General Jerome Adams said parents, teachers, health professionals and government officials must take “aggressive steps” to keep children from using e-cigarettes. Federal law bars the sale of e-cigarettes to those under 18.

For young people, “nicotine is dangerous and it can have negative health effects,” Adams said in an interview. “It can impact learning, attention and memory, and it can prime the youth brain for addiction.”

Federal officials are scrambling to reverse a recent explosion in teen vaping that public health officials fear could undermine decades of declines in tobacco use. An estimated 3.6 million US teens are now using e-cigarettes, representing 1 in 5 high school students and 1 in 20 middle schoolers, according to the latest federal figures.

E-cigarettes and other vaping devices have been sold in the US since 2007, growing into a $6.6 billion business. Most devices heat a flavored nicotine solution into an inhalable vapor. They have been pitched to adult smokers as a less-harmful alternative to cigarettes, though there’s been little research on the long-term health effects or on whether they help people quit. Even more worrisome, a growing body of research suggests that teens who vape are more likely to try regular cigarettes.

Adams singled out Silicon Valley startup Juul. The company leapfrogged over its larger competitors with online promotions portraying their small device as the latest high-tech gadget for hip, attractive young people. Analysts now estimate the company controls more than 75 percent of the US e-cigarette market.

The surgeon general’s advisory notes that each Juul cartridge, or pod, contains as much nicotine as a pack of cigarettes. Additionally, Adams states that Juul’s liquid nicotine mixture is specially formulated to give a smoother, more potent nicotine buzz. That effect poses special risks for young people, Adams says.

“We do know that these newer products, such as Juul, can promote dependence in just a few uses,” Adams said.
Juul said in a statement that it shares the surgeon general’s goal: “We are committed to preventing youth access of Juul products.”

Last month, San Francisco-based Juul shut down its Facebook and Instagram accounts and halted in-store sales of its flavored pods. The flavors remain available via age-restricted online sales. That voluntary action came days before the Food and Drug Administration proposed industrywide restrictions on online and convenience store sales of e-cigarettes to deter use by kids.

Adams recommends parents, teachers and health professionals learn about e-cigarettes, talk to children about the risks and set an example by not using tobacco products. /ee