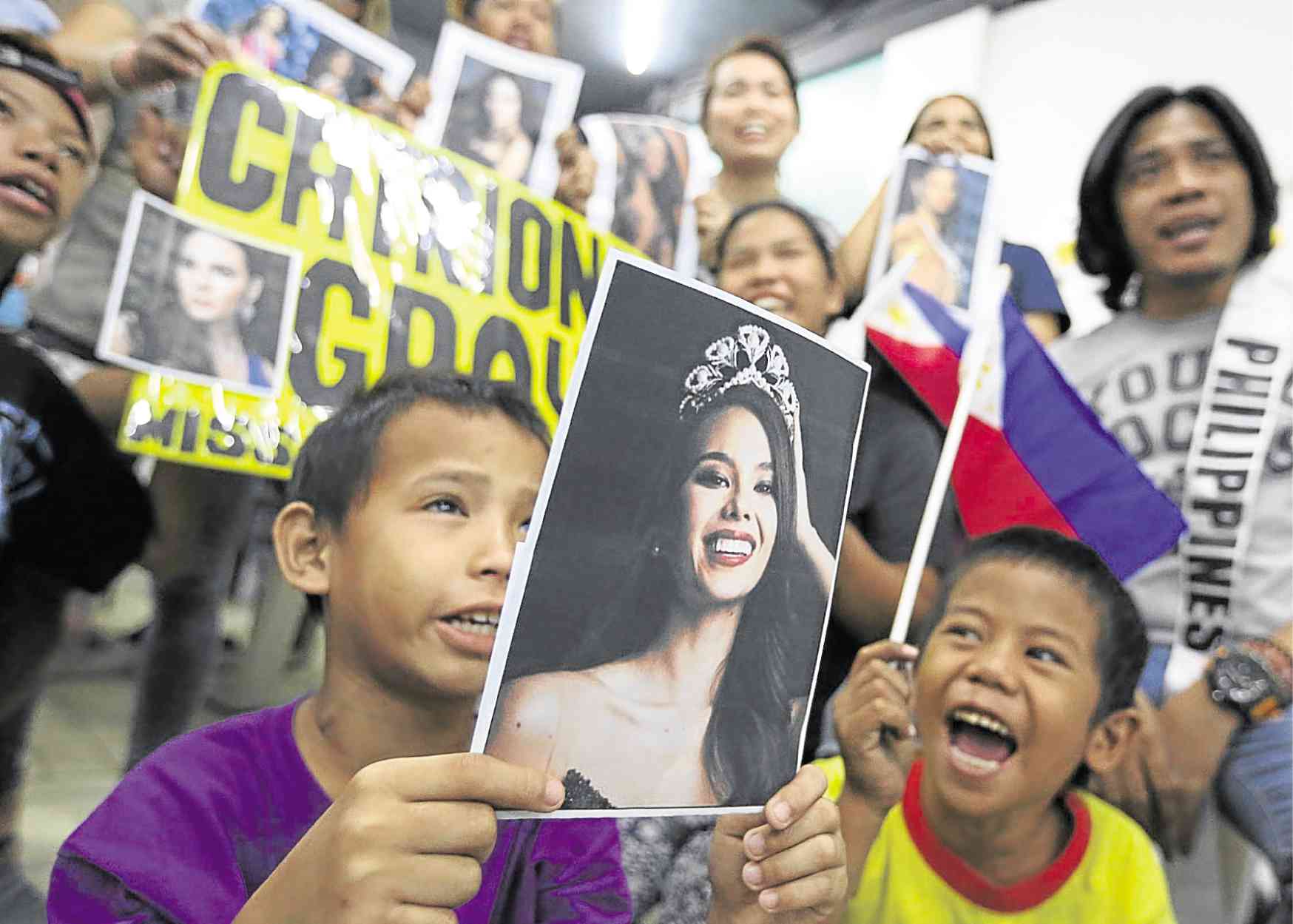 THANKSGIVING PARTY Children and staff at Young Focus International Foundation in Tondo, Manila, cheer one of their benefactors, Miss Universe 2018 Catriona Gray, who told the world that helping kids in poverty was one of her causes. —MARIANNE BERMUDEZ

It was a no-work day at Young Focus International Foundation (YF) in Tondo, Manila, on the day one of its patrons, Catriona Gray, was competing for the Miss Universe title in Bangkok.

The YF Center on Road 10 was almost empty. Most of the employees and students were in different places, watching the glitz and glamour of the pageant and rooting for the candidate they considered one of their own.

Everything was quiet on Monday morning in the building, which was built with the help of the 24-year-old whom the children fondly call Ate Cat, who is known for greeting the staff with: “What do the kids need?”

But after pageant host Steve Harvey announced Gray as Miss Universe 2018, YF was anything but silent. The phones rang nonstop, and the foundation’s e-mail and messaging app notifications were abuzz.

He said that just on Monday, the center received more than 100 messages from people who wanted to help the foundation. “The messages never stopped. We weren’t prepared for it,” he said.

Wijgerden, 58, said everyone in YF wanted Gray to win but no one expected she would. “I mean, what were the chances, right? There were 94 contestants,” he said.

When she did win, suddenly the eyes of world were on YF, too.

“We weren’t even prepared,” Wijgerden added, chuckling. “And we still do not have any idea how to deal with it.”

YF provides support to underprivileged children to help them go to school, believing that poverty should not be a hindrance to getting a good education.

“Finance is not the only problem. If we would just give finances for the students to go to school and we don’t do anything else, our program would fail. It goes hand in hand with the supporting and coaching,” Wijgerden said.

YF has two hubs: One, located in Vitas, caters to preschoolers. The other, on Road 10, is for out-of-school youths.

The hubs and the main office in Balut are all in Tondo, Manila’s biggest district and the heart of Metropolitan Manila’s poor community.

Here slums thrive, and some of the shanty dwellers still scavenge for food on Smokey Mountain and sleep under the bridges or on the banks of rivers clogged with trash.

It’s also one of the places where hundreds of poor drug suspects have been killed in President Rodrigo Duterte’s brutal war on drugs.

To many, Tondo has the reputation of being a dirty and dangerous place. But to YF, it’s the heartland of its advocacy.

“She’s just a normal girl with a sincere heart,” he said.

Gray didn’t find YF in Tondo. She found it on Google when she was preparing for the Miss World competition in 2015 and wanted to get involved in “something with a purpose,” Wijgerden said.

Wijgerden welcomed her but was unsure about her true intentions.

“I was cautious in the beginning,” he said, laughing. “We’ve been used by many celebrities already.”

Everything changed after they saw she was sincere in her desire to help the children. “You know this building where you are in right now? She helped build it,” Wijgerden told the Inquirer on Tuesday.

He said the relationship between YF and Gray grew gradually but steadily. She used to visit YF without wearing any make up and in simple jeans and shirt, which endeared her to the children and the staff.

“She’s the celebrity who does not cover her nose when visiting Smokey Mountain. She’s the beauty queen who does not apply rubbing alcohol after visiting the slums,” Soriano said.

He said the beauty queen treated everyone like her friends and visited Tondo unannounced and without bodyguards or a gaggle of reporters—just herself and her mother and sometimes with two or three of her fans.

“She’s very humble. She has a kind heart. She told me, ‘Win or lose, I will continue helping you,’” Soriano said.