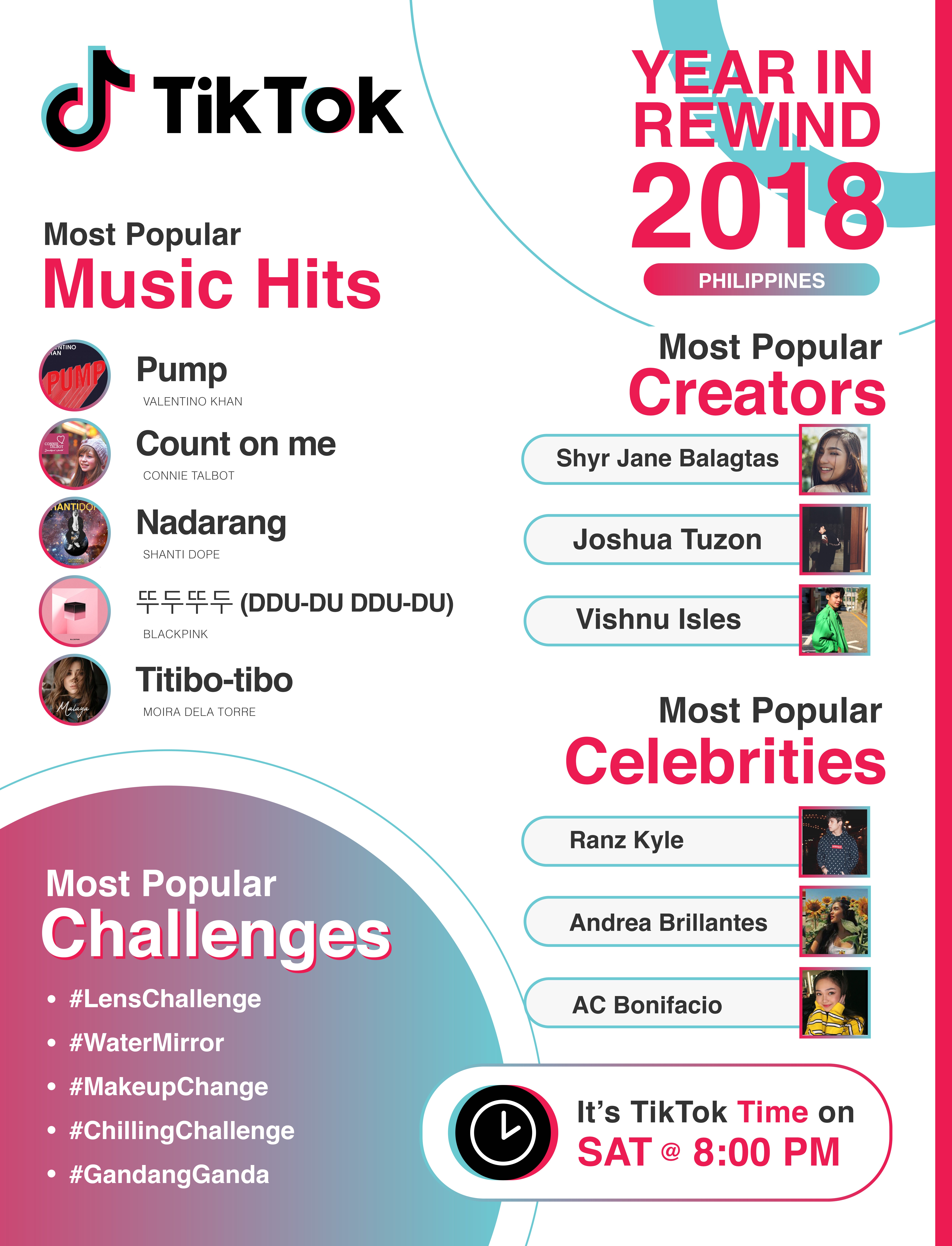 MANILA, Philippines, 17 December 2018 – To cap off the exciting year that was 2018, TikTok, the world’s leading short video platform, today reveals the celebrities, creators, challenges and soundtracks and more that made this year another one to remember. 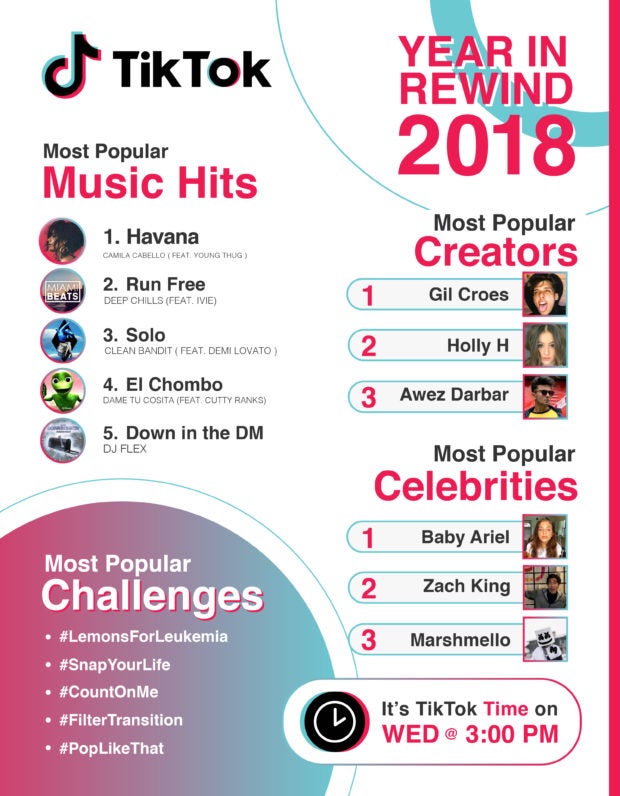 Celebrities from all over the world made TikTok their playground this year, with its easy-to-use features allowing them to give fans a sneak peek into their moments. A diverse list of stars who have gained a massive following on the platform come from all over the world, including Japanese singer Kyary Pamyu Pamyu, K-pop chart-toppers WINNER and BLACKPINK, Puerto Rican rapper Daddy Yankee as well as American social media personality Baby Ariel, who tops the list with around 30 million followers on TikTok. Other international stars on TikTok are Chinese heartthrob Dylan Wang and American personality Jimmy Fallon. 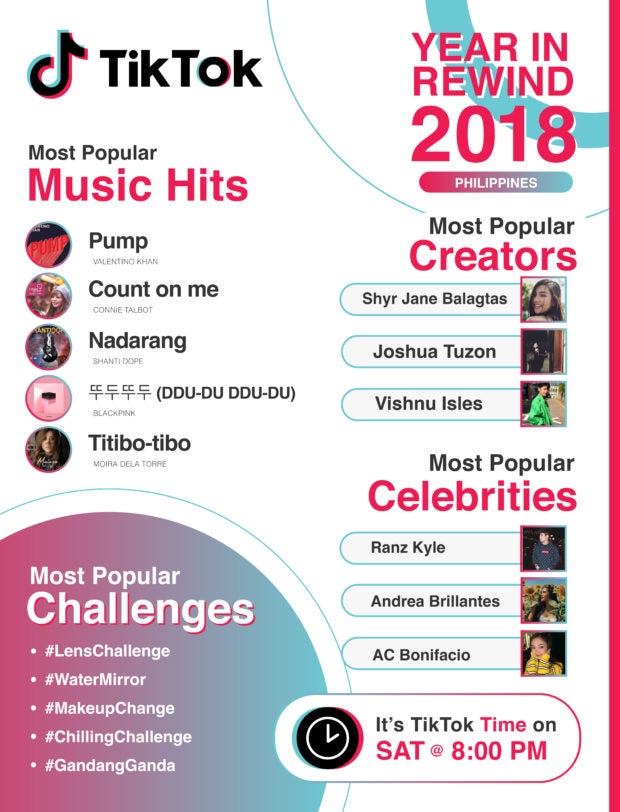 Across the Philippines, the most popular celebrities on TikTok are up and coming young talents Ranz Kyle, Andrea Brillantes and AC Bonifacio who have impressed viewers with their dance skills. Maymay Entrata and Edward Barber, also known as the country’s rising love team MayWard, and Maine Mendoza who has started her fame through short-form videos also made it to the list.

As a platform to engage a growing fan base and a global audience, TikTok also served as the launchpad of a diverse array of local creators. Social media maven Holly H, content producer Gil Croes, choreographer Awez Darbar along with K-Pop dancer Sona are among the creators who made waves globally.

Meanwhile, some of the most popular creators in the Philippines include Shyr Jane Balagtas, Joshua Tuzon, and Vishnu Isles who have mastered the art of TikTok and captured slices of their lives on the platform.

Got a song you can’t seem to get out of your head? Chances are, you heard it from a TikTok video, as the app has increasingly become a launchpad for diverse videos set to catchy music.

Among the most trending soundtracks of 2018 used on TikTok videos include “Run Free” by Deep Chills feat. IVIE, which was popular not only globally but also in India, Malaysia and Taiwan; “Delícia Tchu Tcha Tcha” by Mike Moonnight and DM’Boys feat. Dj Pedrito which was all the rage in Malaysia and Taiwan; as well as Valentino Khan’s infectious hit, “Pump”, which had many fans across the Philippines and Thailand.

In the Philippines, the most trending OPM tunes on TikTok are “Nadarang” by Shanti Dope as well as Moira dela Torre’s “Titibo-Tibo” and “Tagpuan”.

When’s the best time for TikTok? Globally, weekends are all about making your own short videos on the platform. Philippines and Thailand get busy with TikTok from 8:00 pm onwards on Saturdays, while Indian users create videos the most from 11:00 pm all the way until 1:00 am. Malaysians and Singaporeans are most active on TikTok on Saturday afternoons, while users in Vietnam get their TikTok fix just before weekend dinners from 6:00 – 8:00 pm.

Many of the biggest trending videos of 2018 come from TikTok challenges, which allow fans from all over the world to participate in local conversations in their communities. Among the most popular challenges include the #raindropchallenge which made waves all over the world, especially across the Philippines, Malaysia and Vietnam. In the Philippines, the challenges that filled everyone’s feed include #lenschallenge, which was all about changing one’s eye color as well as the #makeupchange that featured an artist’s makeup and video editing skills.

2018 was indeed an unforgettable year for TikTok in the Philippines with campaigns such as the 1 Million Audition that garnered 12,506 entries and 220,312,884 views, giving everyone a chance not only to capture moments that matter in their lives, but celebrating diversity and creativity through content.

Want to see how your own year went? Revisit your own journey with TikTok this year as the short video platform unveils “My Year in Rewind”, an in-app experience offering a personalized lookback, launching in the Philippines on December 24, 2018. Download the TikTok app via iOS or Google Play to get started.