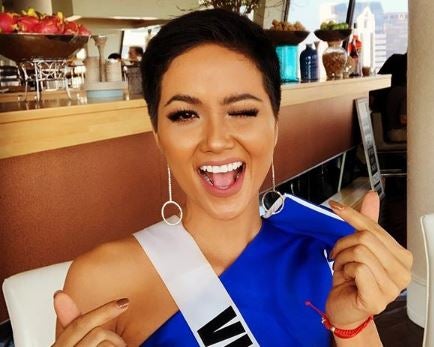 Miss Vietnam trained by Filipino coach ahead of Miss Universe

Miss Vietnam H’Hen Nie’s inspiring life story has won her the love and admiration of many people the world over. The 26-year-old’s success is definitely one for the books, as she is the first ever contestant of Vietnam to reach the top five in the Miss Universe pageant. Nie, who belongs to the Rade ethnic minority, broke tradition by pursuing  her dream of having an education instead of marrying at the age of 14, leaving her rural life in Vietnam to study finance in a college in Ho Chi Minh City.

Reaching top five in the beauty tilt is a feat in itself as the journey to Miss Universe was definitely no walk in the park. Nie, who was a model before winning Miss Universe Vietnam, made sure to prepare for the competition and sought the help of Filipino independent pageant coach Anjo Santos ahead of Miss Universe.

Nie mentioned Santos in her Instagram post last Dec. 13, where she shared a video of her walking the runway in her yellow evening gown. In her post, she extended her gratitude to Santos, who she called “my teacher.”

“From the bottom of my heart, thank you very much, my teacher Anjo Santos,” Nie wrote.

Santos is a Bicol-based coach and trains children and teens through the program Modelo Bikolano, according to an exclusive report by Philippine Entertainment Portal on Dec. 19. He has been training Vietnamese beauties since 2014 and has also trained Miss Universe 2010 4th runner-up Venus Raj and Miss Philippines Earth-Water 2007 Joycie Nocomura.

According to Santos, he trained Nie for a month before the latter jetted off to Thailand for Miss Universe. He and his team, which consisted of Vietnam-based overseas Filipino workers Gerard Ruivivar and Kim Rocafor, covered poise, catwalk, stance and makeup, as well as bull sessions for the question and answer.

What endeared them to Nie the most, they shared, were her bravery and down-to-earthness, as well as her focus and being a fast learner and hard worker. It was palpable that Nie gave her very best during the pageant and the team was nothing short of proud of her top-five finish, a feat that reduced her dear teacher to good tears.