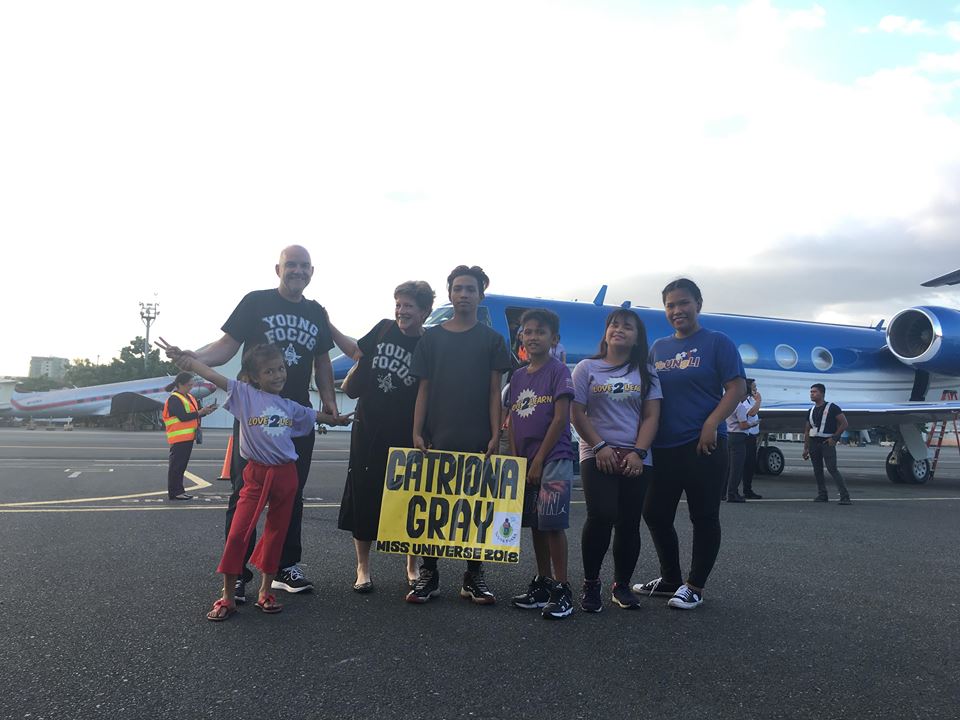 Founders of Young Focus Philippines Paul and Ann van Wijgerden with some of the kids they help in Tondo. INQUIRER.net PHOTO

MANILA, Philippines — As Miss Universe 2018 Catriona Gray returned home on Wednesday, some of the kids she has helped through Tondo-based non-government organization Young Focus Philippines welcomed her with a self-made banner.

In the photo are some of the kids Gray referred to when she was asked about the most important lesson she has learned in life during the Q&A portion of the recently concluded Miss Universe pageant.

She answered: “I work a lot in the slums of Tondo, Manila and the life there is very poor, sad and I’ve always taught myself to look for the beauty in it, to look in the beauty of the children and be grateful.

“I would bring this aspect as a Miss Universe to see situations with a silver lining and to assess where I could give something, where I could provide something as a spokesperson. If I could teach people to be grateful, we could have an amazing world where negativity could not grow and foster and children would have smiles on their faces,” she added.

Ann van Wijgerden, co-founder of the organization, was one of the witnesses to Gray’s dedication in helping the kids from Tondo.

“I think around April 2016 when she first came to the office. I can’t count the times she’s actually come to visit, but she’s been involved constantly from the background,” she said.

Wijgerden narrated how one of her colleagues showed Gray around the slum areas of Tondo where the beneficiaries of the organization lived.

She thought, “Here’s this incredibly beautiful woman, she hasn’t gotten any makeup on, she comes in normal clothes, there’s no big camera team there, she’s just there as herself to be with kids.”

Gray, known to have a long-time passion for music, also used her talents to help the kids in Tondo. Wijgerden said, “Because she can sing so well, because she’s musical, she’s done benefit concerts here in the Philippines as well as in Canada, Australia as well.”

Some of the kids from Tondo who greeted Gray on Wednesday shared how the newly-crowned Miss Universe gave them hope through her volunteer work in Young Focus Philippines.