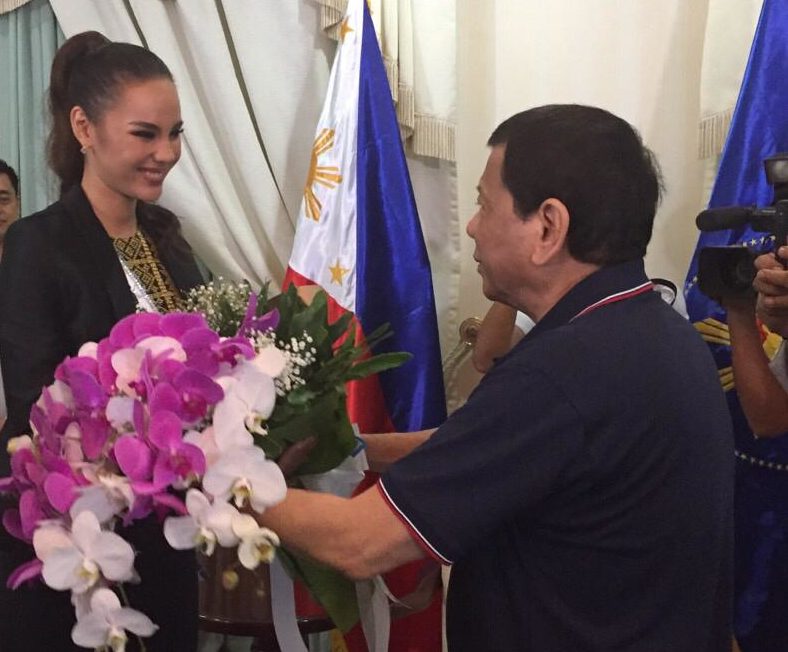 Miss Universe Catriona Gray finally met President Rodrigo Duterte on Thursday night, just hours before she was scheduled to fly to New York to begin her duties as this year’s winner of the prestigious tilt.

“The courtesy call started at 6:20 p.m. and is ongoing,” said presidential spokesperson Salvador Panelo, who sent photos of the President and Gray sitting adjacent to each other at the Bulwagang Kalayaan hangar of Villamor Air Base.

“They [were] just exchanging pleasantries. [The President] thanked Gray for bringing home the crown [and] said everybody [has been] euphoric about her win,” Panelo said.

In the photos sent by Panelo to reporters, the President was seen giving the beauty queen a bouquet of pink flowers. The two were also photographed with the Philippine flag and the presidential seal behind them.

In a text message to reporters, Christopher “Bong” Go, the President’s former aide, said the President thanked the 24-year-old stunner for the honor she had brought to the country.

Gray, who gave the country its fourth Miss Universe title after Pia Wurtzbach in 2015, Margie Moran in 1973, and Gloria Diaz in 1969, earlier brought holiday cheer to the children from Gentle Hands Orphanages at the Shangri-La Hotel in Bonifacio Global City.

“We are giving the gift of giving,” Gray said of the child and youth welfare agency that rescues and rehabilitates children and youth who are at risk.

“Giving is so important, especially to children who may have been dealt a poor hand in life,” Gray said at the charity event’s press conference on Thursday morning.

She has always been drawn to children, said Gray, the only child of a Scotland-born Australian and a Filipino woman from Oas, Albay.

“Growing up, I always wished for siblings,” she said.

“I guess when I became an adult and reached out to a charity, working with children just really touched my heart because they’re so pure,” she said.

Gray is known for her volunteer work in Tondo-based Young Focus International Foundation, a nongovernment organization that also works closely with children.

She even released a song titled “We’re In This Together” in November, which was dedicated to the beneficiaries of the organization.

A simple gift, Gray said, “will really stay with [the children] this season and they could have an amazing, positive outlook on the year that is to come.”

The Christmas charity event for children was a project in partnership with the Miss Universe Organization, Frontrow and LCS Group of Companies. —With a report from Krissy Aguilar