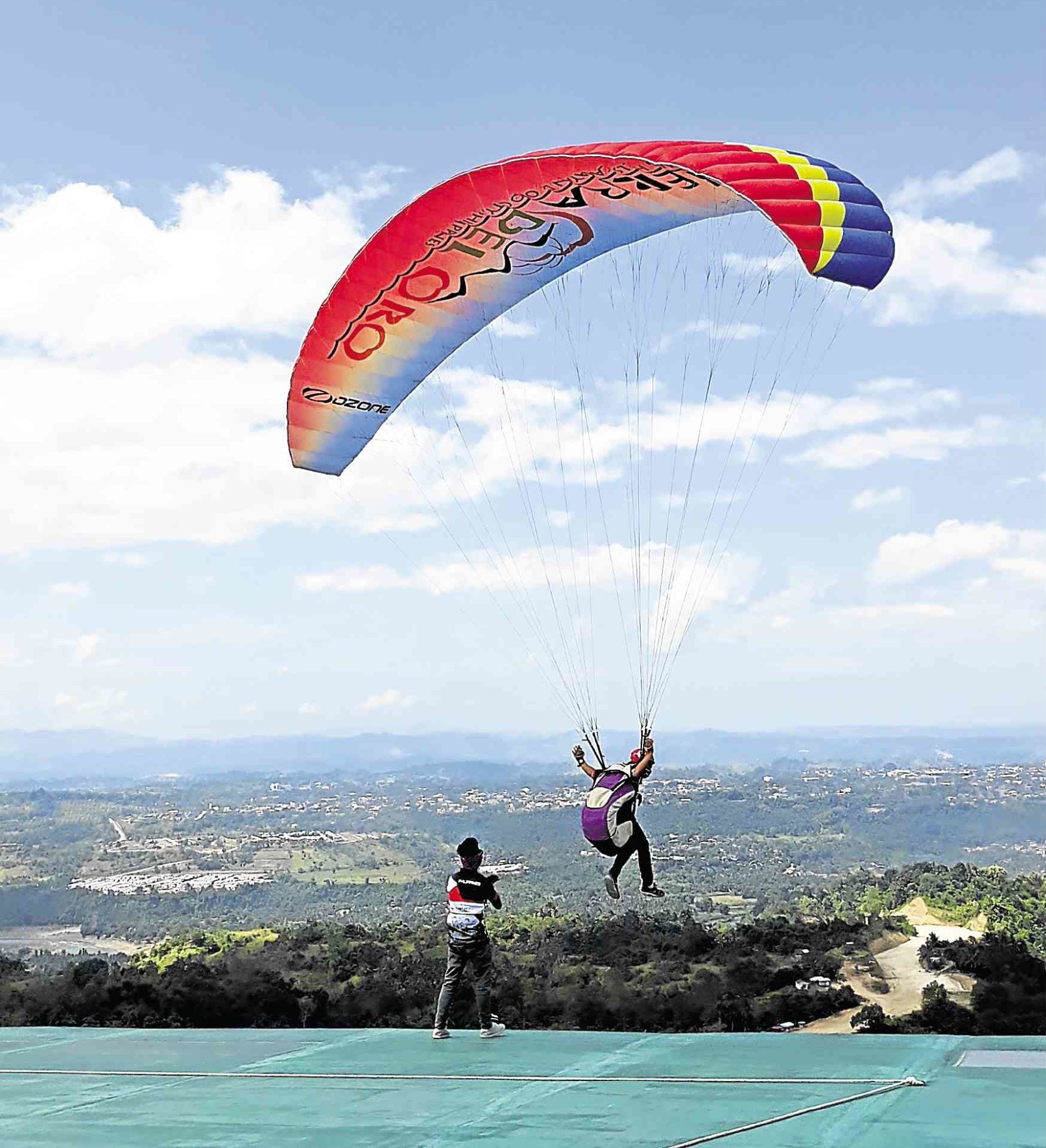 If a one-year-old can survive these rapids, so can I.

I tried to psych myself up, after our raft carrying seven people bumped and banged on the rocky rapids of the Cagayan River like “Jurassic Park The Ride.”

Amusement parks scare the bejesus out of me and this wild water ride reminded me of one. There were 12 more rapids to go in one hour, and the only way to turn back was to swim against the current.

On the way to our jump-off point, our guide, Tata, related that a one-year-old was the youngest person to try white-water rafting. The kid’s parents wanted to go rafting, but they couldn’t leave their kid alone.

The oldest person to conquer these rapids was 87-year-old Marsha Newman, said the Kagay instructor. I reminded myself again: If a child and a senior can survive these rapids, so can a 24-year-old like me.

I wanted the full Cagayan de Oro (CDO) experience, and white-water rafting was the main event. This city in Northern Mindanao is, after all, named after kagay, meaning river. To skip it would be unspeakable, like going to Paris without catching a glimpse of the Eiffel Tower.

So I paddled for dear life, quickly responded to Tata’s calls (“forward,” “backward,” “lock your feet”) and hoped not to fall off the raft.

It had been sunny in the city, the icy waters of the long-winding river bordering CDO and Bukidnon a healthy green. When the weather is dry, the difficulty of the rapids is at peak level 3, but when it rains, the water turns brown, the river runs deeper and the rapids are at level 6.

After bumping through our third rapid, my half-wimp self thought: Hey! I could do this every day. Suddenly, the ride was no longer scary but thrilling. I became less concerned about falling off the raft and felt comfortable in my position while paddling.

In between the thrilling rides, we were allowed to get off the raft and swim (or float) along, cross over to the adjacent bank of Bukidnon province, and explore a cave.

One hour and 13 rapids later, I wanted more. If the group was not pressed for time, I would have happily paddled through the additional three-hour wild water ride from our finish line.

But there were more things to do and literally more heights to conquer in CDO. This I learned on my first trip to the City of Golden Friendship, on board the maiden flight of AirAsia’s Manila-CDO route last October.

The connection between CDO and AirAsia goes way back. In 2011, when Northern Mindanao was ravaged by tropical storm “Sendong” and over a thousand people drowned in their sleep, the Malaysia-based airline’s first Philippine flight took off for CDO.

According to Marie Elaine Unchuan, Department of Tourism regional director, the expansion of AirAsia to CDO is more than just connectivity to major cities and hubs in Northern Mindanao.

“We just came from the Marawi crisis and there is a (perception) that it’s dangerous in Mindanao,” Unchuan said. “But the fact that a big airline company has reinvested in CDO is a good sign, and the myth about Mindanao being a dangerous place is dispelled.”

From Laguindingan airport, there are dozens of itinerary possibilities.

This side of the country, though highly urbanized, has clean streets and wide roads.

Our group had to go through standard military checkpoint en route to the city center, but overall the drive was smooth, the traffic moving. We passed coastal towns facing the unspoiled waters of Mindanao Sea, the source of bountiful seafood.

But perhaps the best and biggest surprise of Misamis Oriental and CDO is that they’re built for thrill seekers.

At Seven Seas Water Park and Resort—30 minutes from the airport—the true attractions are the Cyclone (on an inflatable raft, five people skid a steep slide before swinging like a pendulum through a funky-looking giant funnel) and the Plank Drop (a free fall several floors off the ground, the rider is dropped in an almost 90-degree water slide before barreling through loops in under a heart-pounding minute).

There are also wave pools and water slides for the faint of heart and children under 3 feet.

Our guide said that Seven Seas was envisioned by Elpidio Paras, who wanted to provide a world-class establishment to the locals.

At Amaya View nestled on CDO’s highest peak, the infinity pools overlook the vast city’s hilly terrain, its famous river and the cityscape. Though yet to be fully operational, locals and tourists are welcome to Hugo Sky Lounge, a restaurant and bar with a spectacular view of the city.

Adult playground Larry’s Hill has a high-rope course where people jump from a helicopter replica that sits several feet off the ground. Climbing wall and outdoor ball pit (for kids and kids at heart) are also offered.

Amaya View is the base of the Northern Mindanao Paragliding Club, and guests can fly for P2,500. Paragliding was the very reason we were there.

We arrived past 4 p.m., and waited for favorable winds. This daredevil sport is dependent on the breeze—from takeoff to the height and duration of the ride. Our group of media members and bloggers had to go back the following day because the winds were no longer “flyable.”

We went back at 10 a.m. (about four hours before our flight to Manila), because we couldn’t just leave without paragliding. This, despite the questions running through my head, like, if paragliding is like parasailing, where’s the rope that anchors the flyer to the ground?

Moments later, the wind started blowing toward the right direction. I buckled up. The staff gave me a backpack-like contraption and the pilot, Darvin Villanueva, linked our flying suits using a carabiner clip.

“Okay lang po ba’ng sumigaw?” I asked him. My voice can be deceptively loud despite my diminutive height, and I was afraid that the pilot would go deaf from my screams. He assured me it’s always better to shout to get the jitters out of the system.

It was a crazy feeling, just standing on the deck, but the thought of taking off made my knees weak. This is nothing like parasailing, I thought. In parasailing, there’s a rope that links the flyer’s chute to the boat. Paragliding is just like kite-flying—minus the rope.

And instead of a lightweight kite flying, the one flying is me. I’m overweight. And I’m flying with another person.

But I must be crazier. There’s no way I’ll get on a roller coaster, yet now I buckled up and, when the pilot told me so, I ran to the edge of the deck for takeoff.

I expected to plummet, but the wind swept me up. It was a very natural feeling—flying. And it was way better than parasailing.

Mid-flight, I asked Darvin how long he’s been paragliding.

He was kidding. The good-natured pilot learned the sport five years ago in Sarangani province, where he took a two-week course to learn to maneuver the chute himself and fly solo.

He said that on peak months like February, when the winds are more favorable, each ride may take up to 20 minutes, and one can spiral downwards before landing. He added that paragliding is possible at Amaya because the mountain traps the wind, making it easy to fly.

So, paragliding to the airport was not an option.

When it was time to land, my fear was that I would land like James Corden in his skydiving challenge with Tom Cruise: doing a split and falling flat on the face.

We descended to the foot of the mountain, on a wide dirt road. As soon as my feet touched the ground, Darvin told me to walk quickly. And I did, in my fear to pull off a James Corden.

Our trip was five minutes long, but it felt like 20 because I asked Darvin lots of questions, like if paragliding is his day job.

While our companions were taking their turn to fly, a lola from our group asked a staff: “May senior discount ba ‘yan?” The staff assured her of her privilege, and the lola said she would be back for her turn to glide with the wind.

Maybe it’s not just CDO that is adventurous in nature. Maybe its people are a tad more brave as well?