There’s a room in the inn for scavengers and pushcart families | Lifestyle.INQ ❮ ❯ 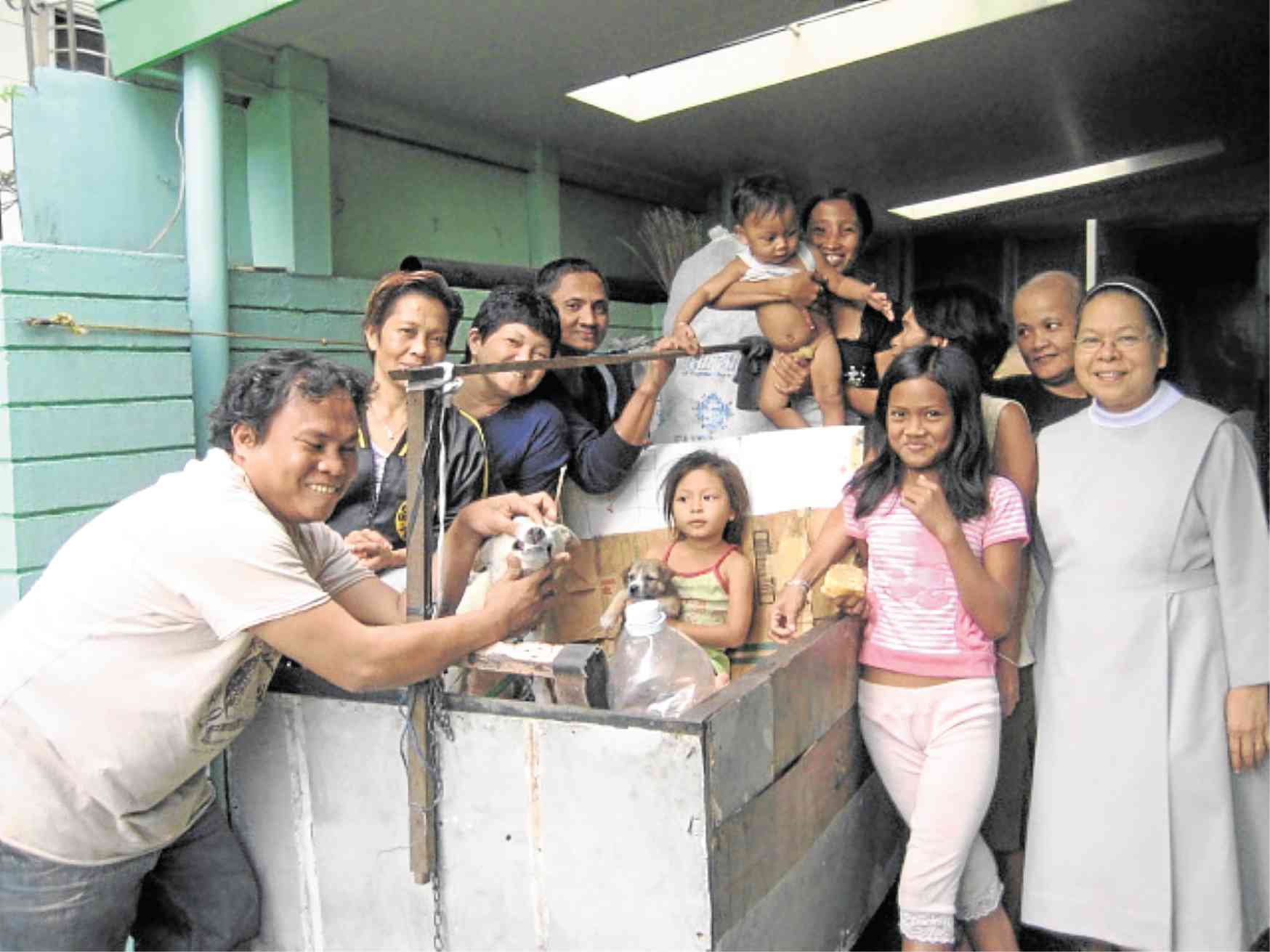 Portrait of a pushcart family in 2008 —PHOTOS BY MA. CERES P. DOYO

Tuluyan (from the Filipino root word tuloy, which means to come in or go forth) means a place to stay, a shelter. Panunuluyan, from the same root word, is a Filipino-style pre-Christmas reenactment of Joseph and Mary’s search for a room in the inn which, as the biblical story goes, tells of how the couple ended up in a stable where Mary gave birth to Jesus.

Marking its 10th year in operation last Dec. 9, Tuluyan ni San Benito and its “guests” over the years had cause to celebrate.

Tuluyan is a haven for itinerants, street dwellers, pushcart families and night scavengers of Manila. Tuluyan is run by the Missionary Benedictine Sisters, who also run the 112-year-old St. Scholastica’s College a block away.

Tuluyan “is not a soup kitchen or a home for the homeless. It is meant to be a temporary haven in the daytime, a place where the homeless could rest awhile, wash themselves and their clothes, use the bathroom and even cook meals. There is food for those without food. The place is neat and well-lighted.”

Sr. Cecille Ido, OSB, Tuluyan coordinator, recalls having seen so many pushcarts with kids in them. “Because of that, the concept of temporary shelter was born. It was an experiment. An alumna of St. Scholastica’s College offered her home on Paris Street to be Tuluyan.”

Everything grew from there.

Tuluyan started in 2008 for homeless families and individuals who frequented Paraiso ng Kabataan in Malate during the day and roamed the streets at night.

Tuluyan on Paris Street opened its facilities to them during the day. These “guests” would leave at sunset to stalk the night to find items to salvage and sell to junk shops for recycling.

As time went by, those behind Tuluyan were not going to let it remain the way it was.

Tuluyan now has a three-story home on Singalong Street, a stone’s throw from Paris Street where it used to be.

Sr. Cecille says, “Working with street people is a daunting challenge that even those who have ripened in development work with different sectors, with all the theory and experience, find themselves off-guard.”

The work is not merely about providing physical shelter. Sr. Cecille says it is also about addressing the root of homelessness and finding ways for the homeless to gain socio-economic and political empowerment.

Many Tuluyan “guests” turned their lives around through basket weaving, food vending, running small businesses in rolling stalls and earning with rent-to-own tricycles. One family even went into farming, away from the bad city, and discovered a whole new world.

By its ninth year, Tuluyan had served a total of 330 individuals (220 adults and 108 children). Its center-based livelihood programs have benefited 86 families, while its area-based income-generating projects have served 18 families.

Material benefits are easier to count, but the changes in the quality of life, that is, the intangibles, are even more important.

Because they are mobile, street families are not included in the national census. Tuluyan offers context: There are 3.1 million homeless people in Metro Manila. Nearly 10 percent of the 39 million Filipinos aged 6 to 24 are considered out-of-school children and youth (OSCY) living in Manila.

For its anniversary, Tuluyan published “Tales from the Streets,” a collection of personal stories of how Tuluyan helped street families and young people get back their lives.

After the Dec. 9 anniversary Mass at the St. Scholastica’s College chapel, Tuluyan beneficiaries shared how their lives progressed from homelessness and scavenging to having homes and regular sources of income, and going back to school.

Recalls Lito Tedranes, whose family was present in the anniversary: “My wife and I met at Rizal Park in 1995. We both grew up in the streets. We got married in 1996. We rented a small room in Baseco Compound in Tondo but after it burned down, we went back to the streets. To survive, we scavenged every night and went to soup kitchens for our meals.”

After finding their way to Tuluyan, life for the Tedranes family changed. “We learned the meaning of unity and getting along with others. Sometimes I would do gardening in Tuluyan, my wife Evelyn would do laundry and cleaning to earn money. Our only son, Jonas, now 14, attended Alternative Learning System classes and is a Tuluyan scholar. We also acquired a sidecar for our kalakal (scavenging).”

The Tedranes family, upon Tuluyan’s recommendation, has moved to a farm in Batangas to start another chapter in their life.

Bea Juliana Talan was 10 years old when she and her mother came to Tuluyan. Her parents had separated when she was a baby.

She helped her mother sell plastic bottles picked up from streets and alleys. Bea joined Tuluyan activities, among them a summer camp with children from Smokey Mountain, a former garbage dump.

Bea narrates, “My mother found another partner and together they had four children. One suffers from a heart condition. Then my mother got jailed for being a drug pusher. Now the task of caring for my siblings has fallen on me. My stepfather gives very little for our needs.

“In spite of our current situation and concerns, I have maintained being an honor student in my Grade 10 classes at Pasay City North-Tramo High School. I have consistently been awarded in the last three years for theater and stage acting and was placed in a Special Program for the Arts.”

Bea adds that she has always been chosen to represent her school in drama competitions. “I hope to finish my studies, give joy to others even as I continue helping my family.”

Bea is among the beneficiaries of Tuluyan’s Project CARE (Child Aid for Revitalizing Education) for in-school and out-of-school street children whose families are financially constrained. Funding agencies and individuals have helped Tuluyan with its projects.

St. Scholastica’s College of Music and the Battig (Music) Foundation have partnered with Tuluyan for a program called “From the Streets to Strings.” There is no scarcity of musical talent in the streets.

Sr. Cecille can only enthuse, “We look back with gratitude and look forward with hope.”

From Mother Prioress Adelaida Ygrubay, OSB: “The poor are not just recipients. We learn from them by walking beside them and behind them. The poor are evangelizing us, and have much to teach us about the suffering of Christ.”