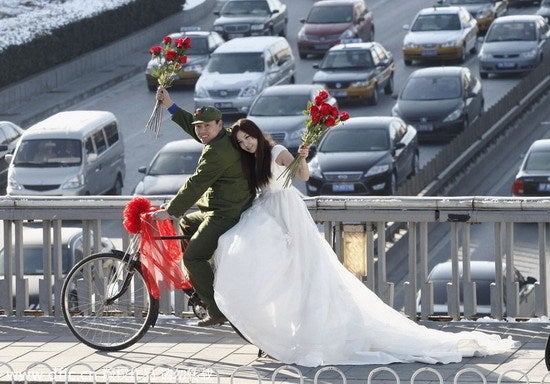 An engaged young Chinese couple sits on a bicycle as they pose for wedding photographs to the theme of naked wedding, on a pedestrian bridge over a busy highway in a traffic jam on Valentines Day in Beijing, China, on February 14, 2011. Photo by China Daily

A new term has become popular recently among Chinese netizens: “Naked marriage”. It’s not what it sounds like – but the term does have a special meaning: Getting married without a house, car, diamond ring or a proper wedding ceremony.

Taking a picture and getting a marriage certificate is all that is involved.

Among these “naked” aspects, having no house is the most important, because it usually stands as a symbolic guarantee.

A popular Chinese TV drama, “Dwelling Narrowness,” strikes a chord with China’s so-called “house slaves,” especially those born after1980, whose youthful ambitions are cut short by soaring real estate prices and an inability to afford a mortgage.

While a naked marriage might be today’s answer to the rising costs of living in China’s bigger cities, some also say it is wrong to base a marriage on material goods in the first place. One internet survey showed 43 percent of respondents would prefer a naked marriage, and 47 percent say they don’t.

However, when the result is classified by sex, it reveals a more interesting pattern: 80 percent of men would accept that arrangement, while 70 percent of women would not. —CGTN