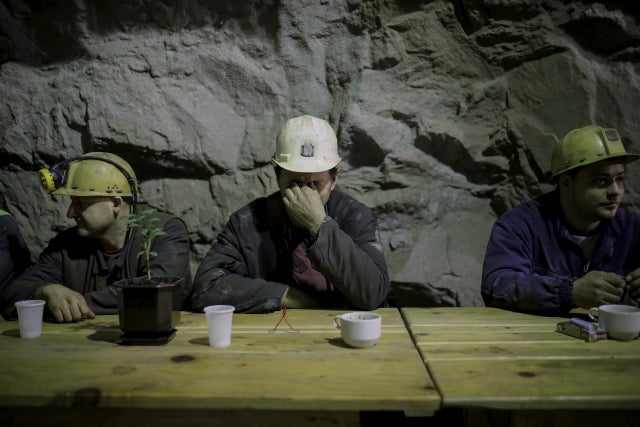 Miners take a coffee break at "The Pit" ("Jama" in Serbian) cafe, some 420 meters below the surface in Bor, eastern Serbia on December 1, 2018. Image: AFP/Oliver Bunic

Four hundred meters (1,300 feet) below the small city of Bor, the depth of Serbia’s love for coffee is on display as men in hard-hats huddle inside a cafe carved into the walls of their copper mine.

Known as “The Pit”, the cave-like room has rough earthen walls and long wooden tables where miners and visitors sip hot drinks and smoke cigarettes in the centre of RTB Bor, the biggest copper mine in Serbia.

The cafe was first opened in 2012 to give relatives and tourists a chance to connect with the miners and better understand their work.

“We wanted to make it possible for everyone interested, who has never been down in the mine, to see and feel what it is like,” said Gorica Toncev Vasilic, a spokeswoman for the mine.

“Above and below this cafe, miners are working. The production is always the priority,” she added.

Although residents of Bor have long relied on the mine for cranking their economy, most had never seen it firsthand.

Since it opened, more than 5,000 people have plunged its depths for a free cup of joe, including foreign visitors and a slew of local celebrities.

While the miners have welcomed the outreach, they say the cafe is a world apart from the humidity, dust and darkness they grapple with inside the mine shafts.

“Down below is totally different,” Nemanja Radoicic, who has been working there for five years, told AFP from the cafe.

“It is very dark there, and you are always dreading some kind of injury because there is constantly a danger of rocks collapsing due to explosions,” he added.

A sign reading “Good Luck” hangs across the elevator that brings miners to their work sites.

Those words are also the most common greeting between workers, who are always aware of the risks of their job.

Apart from the daily dangers below ground, the copper mine and smelting complex has hit hard financial times in recent years.

It was a pillar of Serbia’s industrial sector before the collapse of communist Yugoslavia in the early 1990s.

But production has since plummeted as the company has become saddled with debt.

After years of trying to privatize the troubled mine, Serbia this year sealed a deal handing control over to the Chinese firm, Zijin.

Miners are not sure if, or how this will change their daily grind.

“We call working down there ‘earning the bread of seven crusts,’ because of how difficult it is to make a buck,” said Radoicic, using the Serbian equivalent of “hard-earned bread.” CC

Torun gingerbread: The ancient luxury with a secret recipe