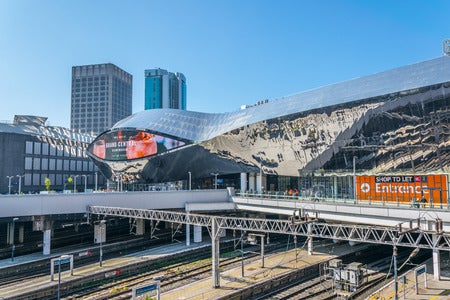 Around two hundred homeless individuals gathered before a nice, warm three-course Christmas banquet, after a train station in England was transformed into a dining hall just for the Yuletide celebrations.

The feast was held at the Birmingham New Street railway station which saw its lower concourse decked with round tables and Tiffany-style chairs, in anticipation for its special guests. The initiative was carried out by the Midland Langar Seva Society, the Network Rail and volunteers, as per Birmingham Mail on Dec. 24.

Aside from the warm meals, the homeless people were also treated to Christmas presents, a visit from “Santa Claus” and a choral performance to cap off the night.

“Our main purpose is to serve humanity and serve hot meals to people less fortunate than ourselves, give out hats, clothes and warming clothing and give hope,” Randhir Singh, chief executive of the Midland Society, was quoted as saying.

Scenes from the station were shared on I Am Birmingham’s official Facebook account and showed off the decorated tables in the lobby while volunteers wearing Santa hats and orange vests huddled together.

The tables are set at #Birmingham New Street Station to welcome 200 homeless individuals for a special #Christmas meal,…

Singh further shared that many homeless people long for their families during the Yuletide season; the celebration is one way to spread the Christmas cheer. He also noticed that the homeless usually feel isolated from society in general by being out on the streets.

“They experience depression and the suicide rate is quite high as well…” he said in the report. “It’s their night and we are making it special for them.”

Craig Stenning, deputy station manager, also stressed that Christmas is all about giving back to the community.

“We are at the heart of the community and this is about giving back to the most lonely and vulnerable people in our society,” Stenning was quoted as saying.

Meanwhile, 41-year-old Louise, who usually sleeps out in the streets, shared that she would not have had a warm meal if it were not for the initiative.

“I live on the streets and without this I wouldn’t have had a Christmas meal, the only way I could have had a hot meal would be by begging on the streets,” she said. “It’s amazing what they have done for the homeless.” Cody Cepeda/JB