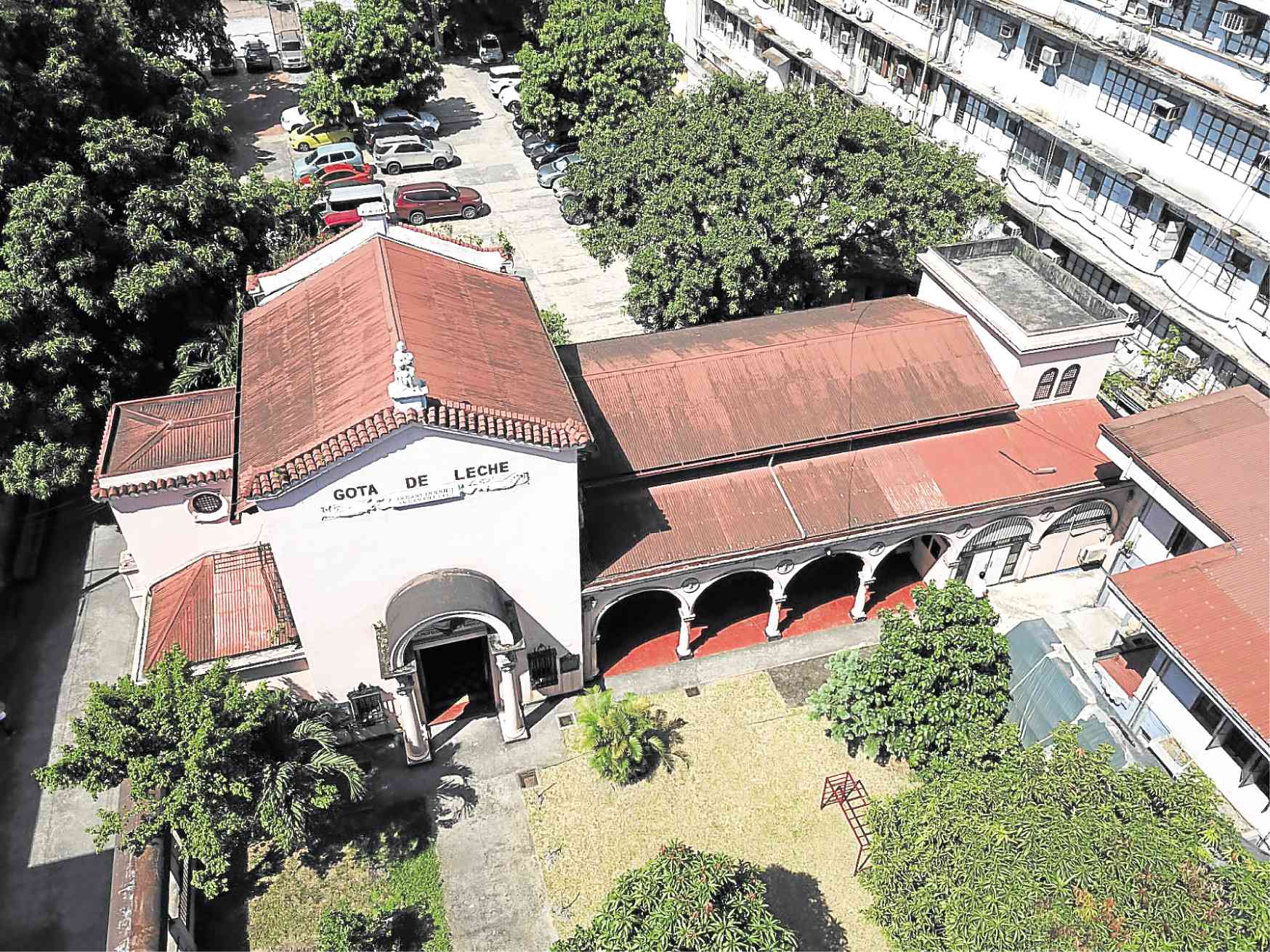 Human habitation enlivens a building. It’s as if the stones know, from the constant padding of human feet, the sound of voices, and the warmth of bodies, that they are still needed on this earth.

Conversely, abandon a building and it immediately begins to fall apart—slowly and imperceptibly at first, and then accelerating into decrepitude.

The best way to preserve a heritage structure, therefore, is to keep using it. Use it, or lose it.

Such has been the case for the landmark Gota de Leche building in Sampaloc, Manila.

Since it was completed in 1915, the distinctively Italianate pink structure, just a stone’s throw from Manila’s university belt, has served as the headquarters for Proteccion De La Infancia Inc.

The building’s name, which means “drop of milk” in Spanish, alludes to this mission which has remained essentially unchanged for more than a century: to impart the milk of human kindness to the children of the less fortunate in the form of nutritional supplements and health care.

Designed by brothers Arcadio and Juan Arellano, the Gota de Leche Building itself has been designated an Important Cultural Property by the National Museum of the Philippines and recognized by Unesco with an Asia-Pacific Heritage award.

Better known as a writer and feminist (and mother to the talented De Leon brood—Ani, Diwa, Sinag), Sarabia sort of inherited this mission from her grandmother, Natividad Almeda Lopez—the country’s first female lawyer and judge—who ran Gota de Leche for many years.

After extensive and painstaking restoration in 2002 supervised by architect and Inquirer columnist Augusto “Toti” Villalon, it is one of the best-preserved examples of early 20th-century architecture in Manila.

Imagine, then, the panic and consternation felt by the staffers and volunteers who work there when cracks began to appear in the structural pillars and the second floor of the historic structure last year.

They traced the damage to the strong vibrations emanating from just across S. Loyola Street, where a construction crew was demolishing one of the older buildings in the University of the East (UE) campus to make way for a new high-rise school building.

Things took a turn for the worse a few months ago when the construction crew started on the foundation for the new building by driving piles into the ground with what is basically a giant hammer.

The aggressive pile driving is the main culprit in the structural damage to the Gota de Leche building, Grijalvo says: “It is fragile because it is a century-old structure. Progress is inevitable, but in other countries, construction methodologies are carefully chosen to protect heritage structures. We are actually protected by a law that declares a heritage zone around a historical structure.”

Grijalvo is referring to R.A. 10066, under which the National Museum or the National Historical Commission can declare a heritage zone, although the law itself remains vague as to the kind of protection a heritage structure is entitled to.

“We don’t want to depend on the government,” Sarabia says, although the National Museum has been notified about the damage suffered by the Gota de Leche building. “Look at what happened to the Torre de Manila.”

Instead, Sarabia and Grijalvo have taken the initiative to talk to the construction company and UE (which is owned by the Lucio Tan business conglomerate) to reach some kind of agreement on how best to proceed.

“All this could have been prevented if there had just been communication before they started demolition,” Sarabia says. “There should be greater awareness on the part of developers on the limits and parameters that should be observed in a heritage zone.”

At present, the pile driving operations have been halted pending a memorandum of agreement between the two parties, which will hopefully reach a compromise acceptable to both.

There is an alternative to driven piles, called the bored pile system, which has a much lower impact on the environment, Grijalvo says. Imagine using a screwdriver instead of a giant hammer to drive the piles and you get the picture.

It is more expensive, he hastens to add, but preserving heritage structures is certainly worth the cost.

“We have no objection to progress, specially since it is an educational institution they are building,” Grijalvo says.

“We are trying to make them aware that history and culture are actually vital for progress,” he adds. “At the same time, as part of the community, they also have to take care of their surroundings.”

Recently, heritage conservationists have raised the alarm about the construction of the China-funded Binondo-Intramuros Bridge, which they say could affect the Unesco status of San Agustin Church and other cultural landmarks.

Among the concerns raised by the International Council on Monuments and Sites (Icomos) Philippines is the possible effect of piling on historic structures in Intramuros.

Though less visible, the Gota de Leche building is no less critical. Because of its status as an Important Cultural Property of the Philippines, the National Museum has been alerted about the issue, says Sarabia, and is expected to weigh in on the matter.

The Gota de Leche building managed to survive the wholesale destruction of Manila during the last days of World War II. The Allies avoided bombing the area because of the prisoners of war being held at nearby Far Eastern University. Even the Japanese left Gota de Leche alone for reasons of their own.

It would be ironic, indeed, if it survived the carnage of war— only to be sacrificed on the altar of progress.