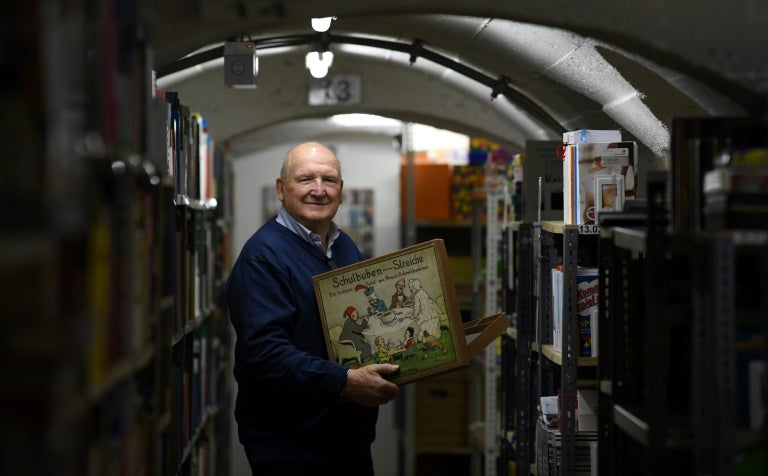 Tom Werneck with a historical board game at the Bayerisches Spielearchiv archive for board games in Munich, Germany. Image: Christof STACHE / AFP

With a treasure trove of over 20,000 board games, including a discontinued Trump property game, Germany’s Tom Werneck has turned a lifelong passion for rolling the dice and passing go into one of the world’s biggest collections.

And if the 79-year-old has learned anything along the way, it’s that winning comes second and sometimes it’s ok to bend the rules.

Walking past endless rows of games stacked up to the ceiling in a Bavarian basement, Werneck chuckles as he pulls out “Trump: The Game” and points to the gold-lettered tagline on the box, picked up in Trump Tower in the late 1980s.

To Werneck, nothing could be further from the truth.

“Playing is about connecting with people. I want to play with you, look you in the eyes. You’re the real aim of the game. I couldn’t care less whether I win or lose,” he tells AFP.

It’s a sentiment that increasingly resonates in today’s digital world, where a desire to turn off our screens and have real-life interactions has fuelled a global board games boom.

The market for table-top games, which includes puzzles and card games, grew six percent globally in 2017, according to the NPD research group, and the trend shows no sign of abating.

Among the oldest treasures in his Aladdin’s cave is a green and white card game from the 1870s featuring famous composers.

More controversially, he also has a Nazi-era board game based on Hitler’s troops conquering England, which Werneck describes as pure propaganda.

“It’s terrible, it was designed to make children excited about war.”

The archive is housed in a building provided by the local municipality in Haar, on the outskirts of Munich, where Werneck and his team of some 15 volunteers carefully catalog and store each title — with new additions arriving almost daily.

To tap into growing demand for table-top games among young adults and children, toymakers are scrambling to marry the new with the analog.

Toy firms have also turned to online “influencers” like YouTube stars to promote games, while rulebooks are going unread in favor of online explainers.

Long-established classics are getting in on the act with reboots such as Monopoly’s Fortnite edition, based on a blockbuster video game, or sped-up versions of existing games.

Among adults, Tutt said so-called “kidult” games that are intentionally childish or irreverent are having a moment, often played at parties or retro game nights.

The popularity of these games comes as no surprise to Werneck, who believes that board games “mirror what is happening in society”.

And although there have been attempts at integrating smartphone apps into board games, Werneck gives short shrift to tech gimmicks that don’t add value.

“If I have to focus my attention on some stupid device instead of my fellow players, then something’s wrong.”

While Werneck enjoys trying out the latest offerings with his grandchildren, the affable septuagenarian never played board games himself growing up, recalling an outdoorsy childhood in the Bavarian Alps.

He was an adult when he bought his first board game from an expensive catalog, only to be disappointed.

Ever the optimist, Werneck tweaked the rules until it worked better and promptly developed an insatiable appetite for board games — until his wife told him his hobby was getting too expensive.

He then started to frequent the Nuremberg toy fair, posing as a critic to snag free board games.

The ploy worked, but a guilty conscience led Werneck to actually start writing board games reviews for German newspapers, which he does to this day.

He has invented a few games of his own but among his proudest achievements is the Game of the Year (Spiel des Jahres) award, which he co-created with fellow critic Bernward Thole in 1979.

The honor has grown into the industry’s most coveted prize, exerting a huge influence on sales.

This year’s award went to the colorful tile-laying game Azul, now a bestseller.

But Werneck says the goal is not to pick the next mainstream hit but reward games “that break boundaries.”

After half a century of devouring board games, Werneck insists he still doesn’t have a favorite.

“There are always too many new games to discover,” he smiles. NVG

Toy makers turn to the toilet for poop-inspired toys