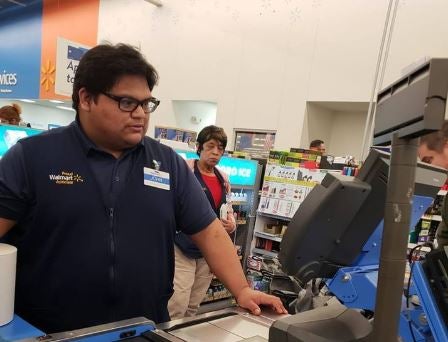 A teenage cashier from Texas stepped in when he realized the woman, whose groceries he checked out, could not afford her bill. The act of kindness was shared all over social media last Dec. 18 by one Lacy Simms, a witness of the event.

Simms took to Facebook to share a photo of teenage cashier John, who works at a Walmart in Princeton. As per Simms, John volunteered to shoulder one woman’s bill when she was unable to pay for her cart of groceries.

“I just witnessed this ‘kid’ pay for a cart of merchandise for a woman in obvious distress about her inability to pay,” Simms narrated. “She was a few people ahead of us and when she had trouble paying her bill he stepped in and told her if she’d wait he would pay her total.”

The bill John paid was no small amount either, as Simms added that the total amounted to $110 dollars or approximately P5,700.

“Y’all, it was $110 dollars!” she said in seeming disbelief. She then called on her readers to drop by John’s checkout line at Walmart, saying, “Please seek him out on your next visit. He is always singing, upbeat, courteous, joyful and efficient.”

Simms was palpably moved over the gesture, adding it renewed her faith in humanity and the younger generation.

“I don’t know John’s story, but I don’t think he is even 20 years old. He just renewed my faith in humanity and the generation we are raising!”

John, full name John Lopez Jr., has since come forward after the post became viral. The 19-year-old shared that he took a job at Walmart last March to save enough to go to college, as per CBSDFW last Dec. 20.

“She started crying and I was like ‘okay I got you, I got you,'” John said of the woman. “I just felt in my heart that the Lord told me I had to help her.”

He added, “My parents basically taught me if someone needs help you should be able to help them and if someone is down, bring them up.”

It must be true that whatever one gives selflessly from the heart returns tenfold. Inspired by John’s act of kindness, the Princeton community has now banded together to raise money in the hopes of paying for his college tuition.