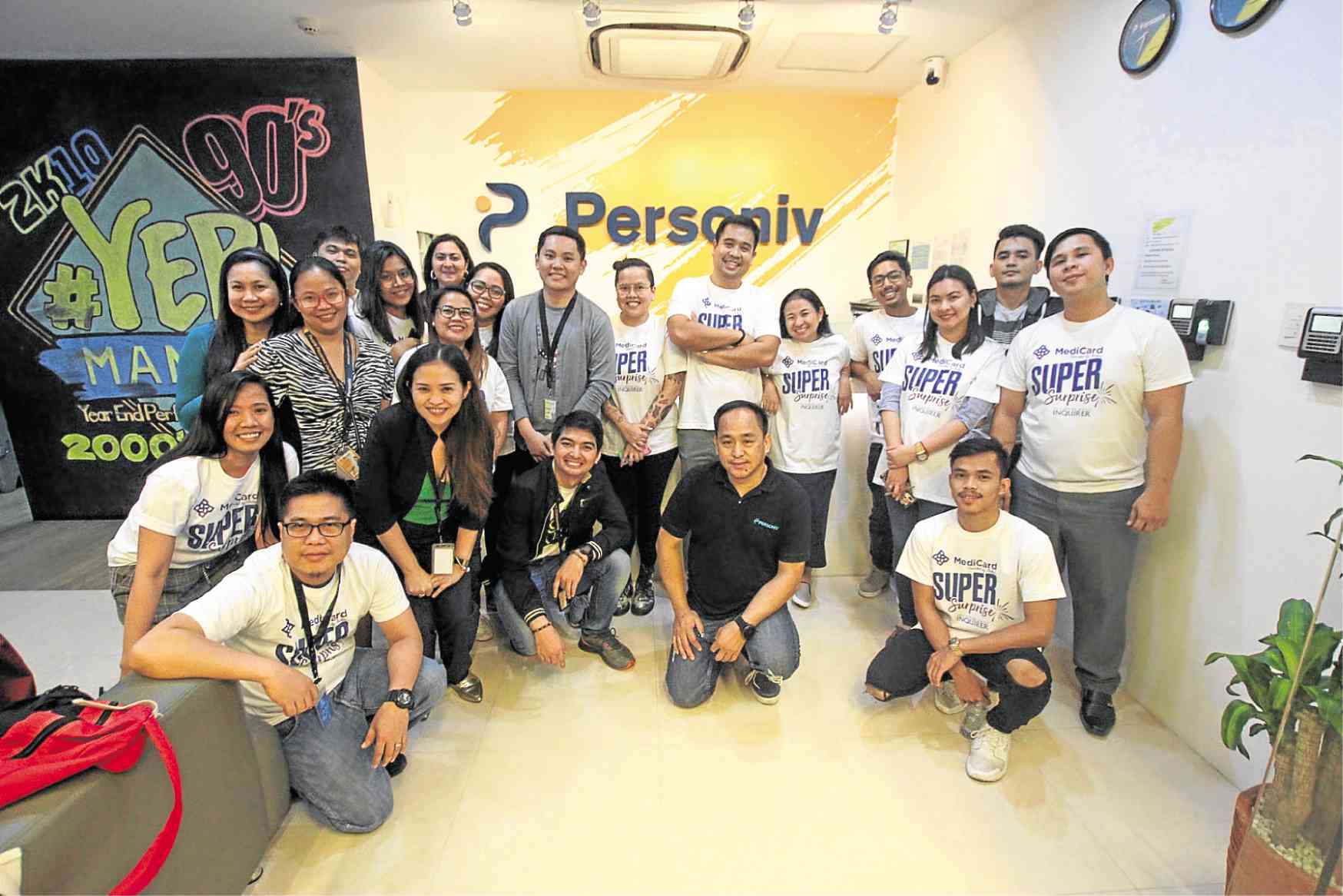 It was 9 p.m., and the sixth and 10th floors of Aeon Center in Alabang were bustling with activity. Employees of Personiv were streaming in, clocking in for the night shift. Some were already at their desks working.

Personiv, a business processing outsourcing company with headquarters in Austin, Texas, has a thousand employees in the Philippines. They provide creative, graphics, digital, recruiting and costumer care services for clients in North America and Asia Pacific and that’s exactly what they were doing that Thursday night.

But it wasn’t just any Thursday night, it was five days before Christmas. And unbeknownst to them, teams from Medicard and Inquirer were hiding in a room at their office, getting ready to spring a special surprise on them.

“It’s Christmas season and we wanted to surprise some of our clients. We want them to practice healthy living, we want to communicate that it’s important to eat healthy,” said Kate Cruz-Joaquin, Medicard marketing services manager.

The Medicard jingle played and the teams emerged from their hiding spot along with Guyito, Inquirer’s beloved mascot. They handed out over 150 kits containing apples, bananas and bottles of water to excited employees that included web designers and proofreaders.

Host Emmanuel Baria, Medicard’s digital marketer, quizzed them on Personiv and health trivia. “How many glasses of water do you need to drink daily?” he asked. “What vitamin does the sun provide?”

He also led a game of Bring Me and winners won mini Guyitos and Medicard wall clocks.

People took photo after photo with Guyito. One man even posed with an apple in his mouth.

“Today was very fun. The employees were all very surprised. It showed us a different side of Medicard,” said John Jefferson Gatmaitan, senior human resources executive for Personiv.

“It was very good to see the happy faces of the employees,” said Kate.

Personiv has been a client of Medicard for 13 years now. Paulo Cheung, Personiv Country Site head, said, “What I like about Medicard is it’s in parallel with our vision and that’s to give the best HMO (health maintenance organization) benefits to our people. They listen, they’re very flexible and they really align themselves to the needs of the company. Part of our mission is to create a culture of fitness in the organization. This year we had the Biggest Winner, it was sponsored by Medicard. We feel that you need to have a healthy body, mind and soul. If you have healthy employees, you have a very productive company.”

Kate said, “NLEx is one of our clients also. We wanted to surprise the people in the booths. It’s Christmas and it’s our way of saying, ‘Hey, of course we did not forget you.’ Our advocacy is healthy living and we want to involve them. And to be able to touch the lives of more people, we also gave away kits to lucky motorists.”

It was Dec. 21, a day dubbed as carmageddon. It was the first day city dwellers would go back to their hometowns for the holidays. Traffic was expected to be heavy. Patience was expected to wear thin.

To bring holiday cheer to the motorists and toll booth operators, Medicard, Inquirer Super and Inquirer Radyo handed out 800 kits at NLEx’s Balintawak Toll Plaza. Each one contained an apple, banana or orange, and a bottle of water. Fruits contain natural sugar that could wake a person up. It is a healthier alternative to coffee.

“It is very fulfilling because we were able to reach our goal which is to delight motorists and toll booth operators,” said Kate.

The Super Surprise team had a safety orientation before the group headed to their stations at the North side of the Toll Plaza. We wore reflective vests (a safety requirement) over our shirts. We were also given strict orders to stay on the safe zones at all times.

The first few cars that we handed the fruits to looked at us doubtfully.

“Libre ba ito?” they would ask.

There were cars whose drivers did not appear interested in what we had to give. But the team was determined to spread the holiday cheer. Charmaine Bautista-Pamintuan, Inquirer Group of Companies’ senior vice president for sales and marketing, and Cris Canaria, Inquirer assistant vice president for marketing, would smile widely and mouth “it’s free” to incoming vehicles. This prompted reluctant drivers to open their windows to receive the treats.

Some would be frowning when we would approach their vehicles, but they would grin as soon as they got their packs. One car’s passenger shot a live video as they approached us.

There were vehicles that we did not expect to open their windows for us. We encountered a heavily tinted luxury van that we suspect VIPs ride and an armored car. They did not open their windows, but they opened the door slightly and the drivers put their arms out.

A motorcyclist showed ingenuity in accepting our gift. As he was approaching, we were talking about how the driver had no compartments where he could keep the pack. When the driver heard us, he started making hand gestures.

He first pointed to the handle bar where a bag was attached. He then pointed to his jacket and said that the bottled water would go there. He then lifted his helmet visor and gave us a wide smile before giving us a thumbs up.

One car driver took the time and read the sticker on the pack that said “Medicard Inquirer Surprise.”

“Medicard? Medicard ako!” The team cheered happily. We thought the driver was saying she worked at Medicard. It turned out that her HMO provider is Medicard.

We were there to surprise them but the motorists surprised us too with the gratitude they showed for Medicard’s gifts.

One car was so touched with the gesture that they handed a gift to one member of the team.

“Naku hindi na po!” said MJ Quevedo, who is from the sales team of Inquirer Group of Companies (IGC).

“Hindi. Para sa iyo talaga ’yan,” he said before he drove away.

It only goes to show that the joy is also in the giving as well as in the receiving. Kate said that seeing the drivers smile when they got their packages was fulfilling.

And this won’t be the end of Medicard’s surprises. Will there be more? We asked Kate. “Yes, with Inquirer Super,” she said.