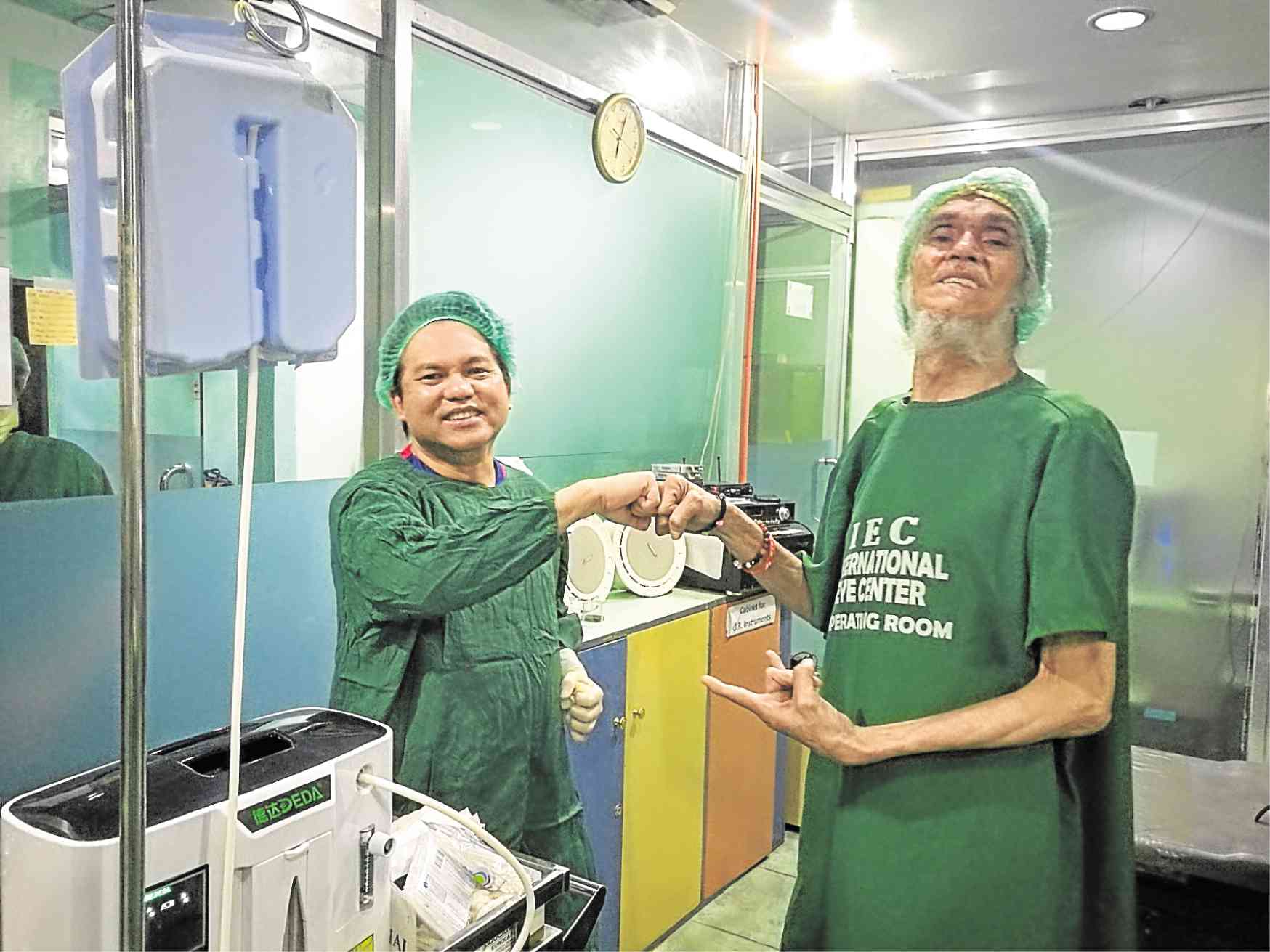 Pepe is Joey “Pepe” Smith, one of Pinoy Rock’s founding fathers in the early ’70s.

Sarabia contacted me because it was I who brought Pepe to her clinic at UP Shopping Center in Diliman in 1993. Pepe had just been acquitted of drug charges after spending over a year in jail.

I was comanaging his comeback in the music scene and one of the things he immediately needed was new prescription glasses, which Sarabia provided.

She said Pepe went to her clinic on Dec. 4 complaining of blurred vision, and she was concerned.

“After doing different lens combinations and with no effect on his vision, I saw a white pupil … He needs surgery ASAP,” she said.

These past few years had been mostly bad for Pepe. A stroke in 2015 left him with a speech impediment. He had lost his lucrative, longtime endorsement deal with Red Horse beer. Worse, a tribute concert in his honor, produced by his most recent manager, failed—only a handful came to watch, and many of the bands were not paid.

Through good times and bad

And now this eye problem, which Sarabia hoped was just cataract. She had talked with an ophthalmologist friend of hers, who said it would cost P100,000 to have cataracts removed from both of Pepe’s eyes.

Because I’ve been through good times and bad with Pepe, I felt a sense of responsibility which pushed me to help find a solution. If he goes blind, I wouldn’t want to feel the remorse of someone who could’ve done something but didn’t.

Then I remembered Dr. Noel Jusay Lacsamana, a top eye doctor I had written about, who performed cataract surgery with rock, jazz or classical music playing in the background to relax his patients.

I texted him about Pepe’s condition. Lacsamana wanted to immediately examine him and told me not worry about the cost, yet.

I felt I needed to personally accompany Pepe to Lacsamana’s main clinic, the International Eye Center at Robinsons Starmills in San Fernando, Pampanga.

Pepe was running late for his 11 a.m. appointment on Dec. 18, but I managed to convince a Grab driver to take us from Cubao to San Fernando with an extra amount on top of the fare.

Arriving five hours late was not a problem for the busy doctor. His initial concern was whether Pepe had another medical condition, like heart disease, which could be a risk to surgery. Pepe’s stroke three years ago seemed to be of no consequence to the doctor.

Lacsamana’s diagnosis: “cataracts, mature, advanced stage.” Hazy images were all that Pepe’s vision could give him. The doctor said it’s “like seeing things around him as silhouettes.”

The doctor said Pepe could go blind if untreated and got the rocker to agree to a surgery that same day.

Lacsama invited me into the operating room to witness the cataract removal. I thought he would play loud rock music because his patient was no less than a Filipino rock legend, but I was wrong.

“Let’s listen to my driving music,” he said.

“Behind the Veil,” a reggae track from Jeff Beck’s 1989 album “Jeff Beck’s Guitar Shop,” started playing as Pepe was ushered into the room.

The song lightened up his mood. He stammered to say he knew who was playing. Lacsamana smiled.

The doctor said he needed a little more time to dilate Pepe’s eyes because the musician seemed tense.

And then, the next song, Led Zeppelin’s 1970 classic, slow-blues number, “Since I’ve Been Loving You,” came on. The blues was Pepe’s main musical influence, but I wasn’t sure whether the song would relax or excite him.

There was a screen monitor that showed Pepe’s eyes and how Lacsamana was removing the cataracts. I cringed at the sight of the doctor’s instruments scraping off what looked like white scales from Pepe’s eyes.

The music helped ease my own tension: another Led Zep track, “Babe I’m Gonna Leave You.”

Toward the end of the 20-minute operation, Pink Floyd’s “Comfortably Numb” played and Pepe muttered that he again knew who was performing.

Smiling, Lacsamana sang to the lyrics of the song that somehow expressed how the pain that Pepe felt was slowly melting away.

By the time the music player blasted Bob Marley and the Wailers’ 1977 party soundtrack “Jamming,” Lacsamana was putting the finishing touches to the new lenses on Pepe’s eyes.

After a few minutes, Lacsamana blurted, “Alright!” to announce that the procedure was over.

“Open your eyes,” he told Pepe.

The smile on Pepe’s face said it all. “Wow, it’s so clear!” he exclaimed.

Told that Pepe would turn 71 on Dec. 25, Lacsamana said: “Wow, so that’s a happy birthday for his left eye and a merry Christmas for his right eye!”

The doctor said he hoped Pepe would be inspired to do more projects because the “new” eyes would add color to his remaining years.

After a few hours back in Manila at Gateway Mall in Cubao, Pepe would, every so often, stop and stare at things like a curious child.