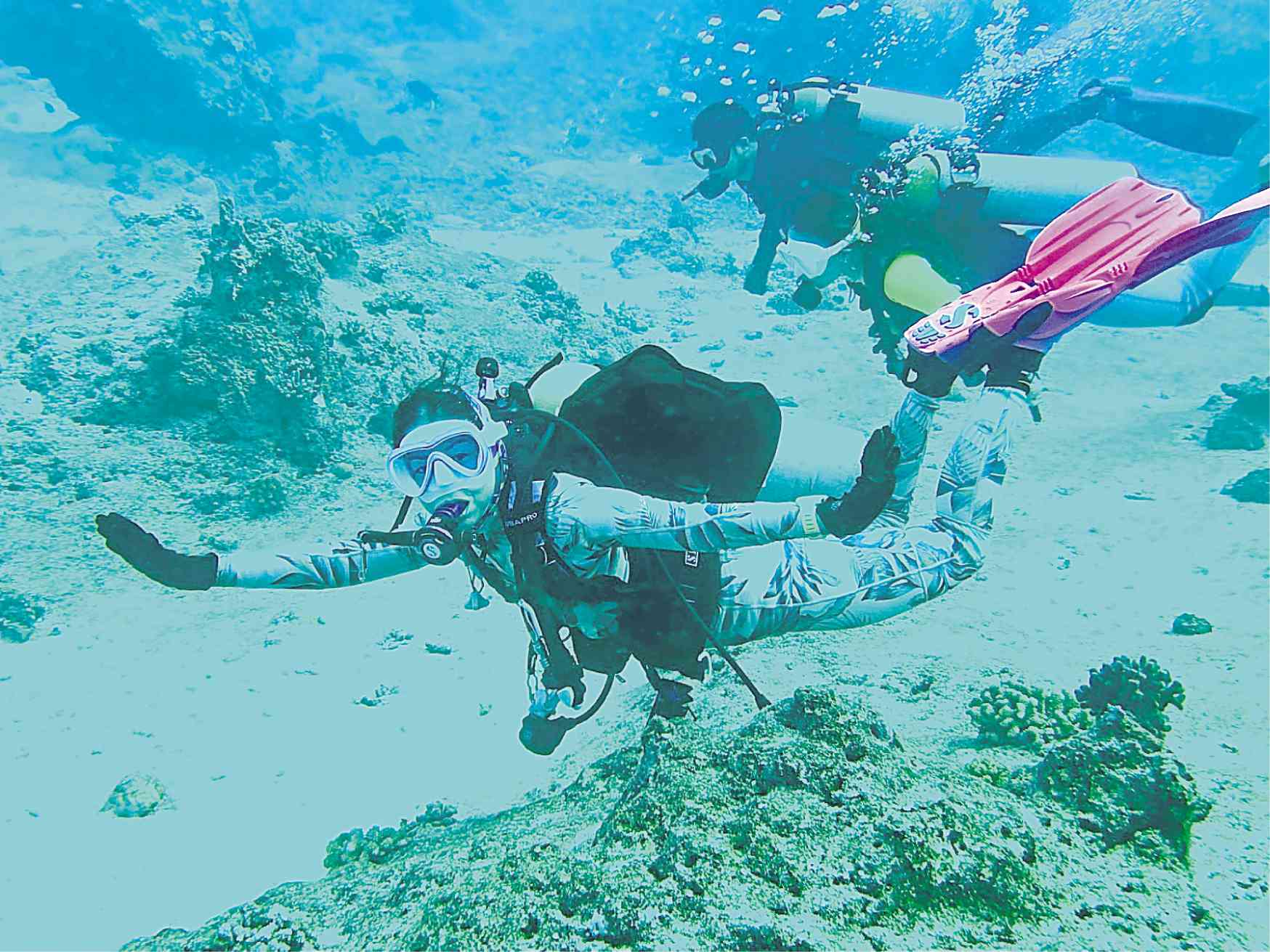 Time does stand still in the middle of the ocean, because there is absolutely no phone signal!

Off the grid, living on a dive boat in the western Pacific Ocean, I rediscovered the wonders of densely forested islands, pristine reefs and abundant marine life underwater.

The first time my hubby Dennis and I visited Palau was during our honeymoon 24 years ago. We both passionately love scuba diving, so we kept getting back to one of the world’s best dive destinations several times.

We thought it would be great to plan this year’s Christmas holidays in Palau, but this time with all the kids, including our new daughter-in-law, Tinkay Crespo-Prieto.

After getting all of them certified with our matchmaker/ dive instructor Gigi Santos, Dennis arranged with Fish n’ Fins Palau owners Tova and Navot Bornovski to see if Ocean Hunter III was available.

Live-aboard accommodations are highly recommended when diving in Palau. With many dive sites quite far from the main city Koror, divers should choose a live-aboard instead of a day trip.

Doing multiple dives, up to five a day, is possible only on a dive boat.

Our honeymoon was onboard the Palau Aggressor. We dove with the vessel a few years after, and later we met Tova and Navot, when we tried their live-aboard Ocean Hunter I along with my aunt, Mary de Leon Rufino.

Now, we only go onboard Ocean Hunter III (OH3) where the diving is incredible, and the three gourmet meals a day prepared by Filipino chef Arlee are absolutely delicious. Snacks are continuously served at sunrise, morning, afternoon and late night.

It’s diving luxury, where you can chill on the deck or relax in the Jacuzzi in between dives. Smoothies and special baked goodies are also served throughout.

Capt. Kenneth Johnny is the big boss of OH3. He is the one who decides where the boat goes and plots the dives for the day. Our first dive was at German Channel, where we were greeted by a giant manta.

The diving in Palau is good year-round, but in December, the upwellings start—bringing colder water up from the depths, and with that, bigger marine life, as well. December is also the start of manta season —in fact, manta mating season.

During one dive, we witnessed over a dozen of these gentle giant mantas swirling, dancing and flying in a squadron. We had manta sightings the entire week. We even saw one on the surface playing in the shallows, as we passed by while crossing the famed, historic German Channel.

The German Channel is a narrow opening created in the coral reef to allow boats to cross from the northern Rock Islands into the southern parts of Palau. It was created during World War II, when the islands were under Axis control. The channel is still in use, over 70 years later.

The southern island of Peleliu saw some of the bloodiest battles during the war, and even today, there are military wrecks scattered all over the island, as well as offshore underwater.

Palau actually has more Japanese wrecks than Coron, many of these in shallow and accessible areas. One unusual wreck we visited was the Jake Seaplane, almost entirely intact, propellers and all.

The most famous dive spot in Palau is Blue Corner, an underwater spit that juts out on the southern side of Ngemelis Island. As the currents wash over the spit, all the big marine life comes by, from gray reef sharks, giant trevally, dog-tooth tuna and Napoleon wrasse to chevron barracuda and many other predators too numerous to name.

Because of the currents, Palauan divers invented the reef hook, which we attach to the coral to float up effortlessly to watch the live, underwater NatGeo-level marine show.

Ulong Channel is, by far, my favorite dive site. The natural channel is bursting with marine life that is unparalleled, with walls of cabbage coral and other colorful sea fans along the channel. Ulong is best dived during an incoming tide, so that the currents can push you along the wall.

Another world-famous attraction is Jellyfish Lake, a marine lake located on Eil Malk island, among the Rock Islands, a group of small, rocky, mostly uninhabited islands in Palau’s southern lagoon, between Koror and Peleliu.

In 2015 and 2016, Palau suffered from El Niño and a severe drought. The combination wreaked havoc on the famous population of golden jellyfish at the lake. Luckily, the time we visited, the golden jellyfish were back in full force. They are a unique subspecies that has lost the ability to sting.

A more recent, somewhat controversial attraction is Dolphins Pacific, which claims to be the world’s largest marine mammal interaction, educational and research facility. They have six resident dolphins, four of which were rescued from a dolphin drive hunting area in Japan over a decade ago. This year, dolphins Roxy and Layla each had a calf, completing the troupe.

When we visited, we began with a short introductory splash, then worked our way into the symphony and experience of interacting with the dolphins. While the entire idea of captive wildlife has created controversy, there is no doubting the educational aspect of Dolphins Pacific.

We ended our short visit to Palau all too soon. Luckily, when we want to have a bit of the Ocean Hunter live-aboard experience, we can try to get a booking on the Oceana Maria Scuba, which was formerly the Ocean Hunter II.

Oceana today focuses on Tubbataha dives, a season that will soon be starting up. The dives in the Philippine Sea have excellent big marine life and giant coral fans, too.

First trip is late March until middle of June.

Let 2019 bring an ocean of blessings and good times! Here’s to a happy New Year!