Yes, but is it art – or investment? | Inquirer Lifestyle 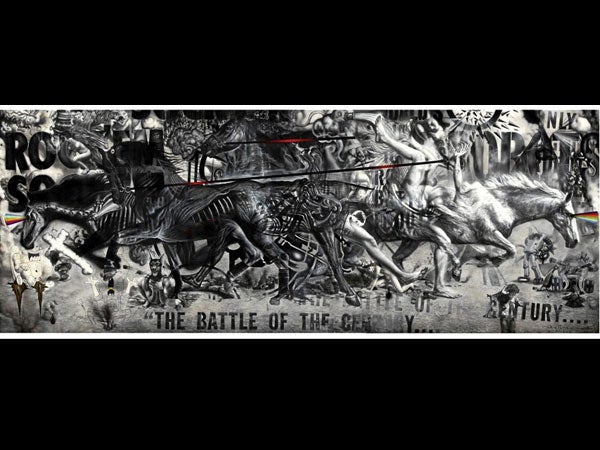 Yes, but is it art – or investment?

A staggering P46.9 million for a painting by a Filipino artist has set the local and Asian art market agog.

In April this year, Ronald Ventura set a historic record at the Sotheby’s Modern and Contemporary Southeast Asian Paintings auction in Hong Kong when his painting sold for an amount 24 times its original high estimate. The painting, titled “Grayground” (graphite, oil, and acrylic on canvas, 60 inches by 155 3/4 inches) sold for HK$ 8,420,000 or P46, 995,832.65, the highest ever for a piece of Southeast Asian contemporary art.

The amount is incredulous, even considering that during  the last five years, Southeast Asian countries such as Vietnam, Indonesia, Singapore, Malaysia and the Philippines have been experiencing unprecedented art sales in the two most influential auction houses:  Christie’s and Sotheby’s.

The trend could very well have been  triggered by  two major institutional movements in the region in 1996:  the opening of  the Singapore Art Museum with one of the world’s largest public collections of modern and contemporary Southeast Asian artworks, and the inauguration of the first bi-annual sale of Southeast Asian paintings by Sotheby’s, also  in Singapore the same year.  Those two events eventually  generated international  attention and consequently created a  demand for works  of  a new breed of young artists from Southeast Asia, whose increasing presence  and success in these auctions have stoked interest in  other auctions and galleries in London and New York City.

Just who is Ronald Ventura and how did he become the cause celebré of the local and Asian art market?

Born in 1973, Ventura is known for his cutting-edge mastery in drawing with a surrealist bent that utilizes a combination of hyperrealism, graffiti and cartoons. These elements are situated within complex compositions that explore social, cultural, and historical issues alongside layers of mysterious imagery that delve into the psyche.

Ventura holds a Bachelor’s degree in Fine Arts, major in Painting from the University of Sto. Tomas.  Since 1998, he has participated in numerous exhibitions here and abroad. In 2005, he won two major distinguishing awards:   the Ateneo Art Awards and the Cultural Center of the Philippines’ 13 Artists Awards.

Asked his opinion on Ventura’s record-breaking sale, Nicholas Forrest (Art Market Blog: The World’s Most Popular Independent Art Market Analysis) observes:    “Investors and collectors are always looking for new emerging markets that have untapped talent, and several Southeast Asian countries fit the bill – including the Philippines. What makes Ventura stand out from the crowd is the fact that he has progressed through the ranks and proven himself over quite a long period of time.  Ventura showed that he is an experienced artist with a bright future. Adding to his status is the fact that he has been picked up by a New York gallery and was part of the 2008 Singapore Biennale.”

Patrick D.  Flores, professor of art history, theory and criticism, and author of several books on Philippine art, says that Ventura’s recent  sale could attest to the fact that the artist has been steadily earning a huge amount of attention from buyers. Says Flores: “[T]he signature is highly valued in the market, the artist having the most stable market presence among Filipinos in the emporium. I’m not sure if his being Filipino mattered or if what he wanted to say in the painting was a concern.”

More views from the scene

Norma Liongoren, owner of Liongoren Gallery, one of the older galleries in the country, calls Ventura the “Pacquiao of Philippine art.”

Notes Silvana Diaz, owner of Galleria Duemilla:“We have been made proud because of Ventura’s  achievements as a Filipino artist. We’re very happy that now foreign dealers are looking at the Philippines as a source for bankable art.”

Egai Talusan Fernandez, visual artist and head of the the National Commission for Culture and the Arts (NCCA)’s National Committee on Visual Arts,  speaks with pride and excitement: “We should be proud that these young artists are making it big. For years Filipino artists have been trying to make it not only here but in foreign countries as well… mostly by joining biennales, triennials and other special art events abroad.  Now it’s art auctions. It’s a good sign that young artists are being noticed abroad…. ”

The True Value of Art

“…art as investment, art as social elevation, art as confirmation of status, art as relic hunting….the whole rigmarole has done more to debase the real value of art than anything else in our culture…”  —Robert Hughes, Resident Critic, Time Magazine

Ventura has been a consistent favorite in international auction houses since his first sale at Sotheby’s Hongkong in 2008, for a 1973 work titled “Black and Blanche.”  Since then, he has sold about ten times more in either Sotheby’s or Christie’s before his  groundbreaking “Grayground” sale.

According to Artprice.Com, (the world leader in art market information that keeps track of the art market with its unique databank of 27 million auction prices and indices, and detailed auction results), Ventura’s first sale in 2008 earned him about US$62,000.  Subsequent sales have shown a consistent increase in the value of his works  until 2010, when his biggest hammer price was $270,000 before “Grayground” – a tremendous jump to more than  a million dollars in just a few months!

Indeed, Ventura’s major coup has not only given us Filipinos a collective lift in  self-esteem;  his major sale has also brought valuable international attention to Philippine contemporary art which our local galleries, museums  and cultural institutions could not have achieved  on their own.  Auctions also help a lot of artists earn a good living at a level that local art dealers cannot possibly provide.

However, we must also have a realistic view of how the art market truly moves.

The practice of regarding contemporary art as investment rather than art for its sake began sometime in the ’60s in the US, as epitomized by the commercialism of Andy Warhol.  Collectors then began buying art not for its higher intrinsic value, but rather as an object that is expected to increase in value in the future.  This eventually paved the way for artists to fall into the consumerist trap that sadly began to influence artistic styles and establish trends.

The market can indeed stifle and influence artistic endeavor.  This is the downside to Ventura’s success and those of other young artists in the global market, says Silvana Diaz.  “The local market now finds itself somehow in disarray, because now a trend has been established and creativity is affected.”  She calls this the “creative bandwagon.”   She continues:  “Young artists now have a tendency to repeat the styles of works being bought in these auctions.

Though the current trend is difficult to forecast based on auction records, according to Professor Flores, “(Do) artists make art solely for the market or does art start out as a commodity, which is not impossible but clearly quite tragic?  There’s a thin line between a speculator and a connoisseur. It could be purely speculation; or purely a collector’s belief that the work is worth that much. Either way, the logic is market-driven and beyond the pale of the curator, the critic, the historian, and even the artist. It’s thrilling, and therefore scary.”

But the dictates of the market are volatile and the value of artworks is subjected to its idiosyncrasies.  For instance, what if a collector suddenly decides to unload his collection at a really low price?  In this case, what is the real value of the art work?

Says Robert Hughes, producer of a series of documentaries, “The Mona Lisa Curse”:  “Art is the biggest unregulated market in the world apart from drugs…  art is no longer appreciated based on its critical perspective but rather on the price tag.”

Money is the greatest motivator in this world, and unfortunately, art, despite its supposedly lofty ideals, is no longer an exception.