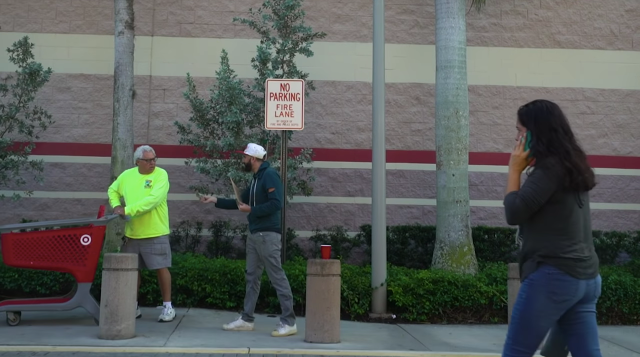 WATCH: Man pranks Good Samaritans by pretending to be homeless, gives them $100

A YouTube personality pretended to be homeless in order to give back to people who have the heart to give to the less fortunate.

Brian Breach decided to disguise as a homeless person in front of a department store as seen via his YouTube channel on Dec. 25.

His video, which had gone viral, has been shared on various social media platforms and has since made headlines.

Wearing a ripped and dirtied hoodie, cap, pants and shoes, Breach set out in front of a department store for his “giving back prank.” He held a red plastic cup with bills and coins in one hand and a piece of cardboard with the words “Homeless/Just need a little help to feed my family through the HOLIDAYS” written in front.

Breach waited, with the cup and cardboard sign on hand, for people who will be kind enough to spare him a second glance. Two women were the first to approach him and offered him protein bars.

As a way of giving back to the Good Samaritans, Breach gave the women a $100 (around P5,200) bill for them to spend. The YouTube personality continued with his prank, surprising other Good Samaritans who gave him either a dollar or two.

After his video trended, Breach followed up on his good deed by creating a GoFundMe campaign for the less fortunate on Dec. 28.

“The video ended up going viral (Fox News, Inside Edition, Yahoo, MSNBC etc.) and I wanted to use the momentum to raise some money for people that actually need it from someone who’s homeless trying to make a better life for themselves to a struggling family,” his campaign read. “With all the negativity going on in the world I wanna inspire others to [do] good.”

Home alone together: Elderly in care facility speak out their Christmas wishes