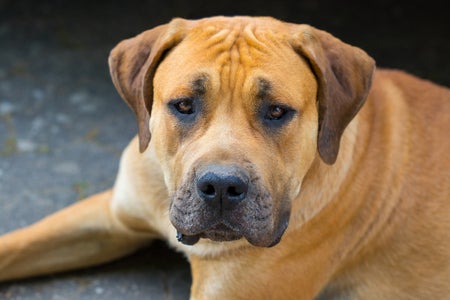 Closeup portrait of Boerboel, also known as the South African Mastiff dog. The dog in the story, Benton, is of the same breed. INQUIRER.net stock photo

Dogs appear to have the innate ability to determine if someone has a bad intention, particularly if such bad intention is directed against the dog’s owner. This may be true in the case of a female nurse from Wisconsin, United States who saw a man passed out inside her home and right beside her dog — she was left to wonder why her supposed protector did not alert her.

Lynn Sarver and her female house guest came home from a party at around 1:30 a.m. yesterday, as reported by the Milwaukee Journal Sentinel. She made sure she locked her front door before falling asleep while watching the drama series “Grey’s Anatomy”.

Imagine her surprise when after waking up at 5:15 a.m, she saw an unidentified man, estimated to be in his twenties, passed out beside Benton, her 130-pound Boerboel dog.

Sarver has no idea why Benton did not bark at the intruder. She said she bought the dog three years ago to guard her house.

“My dog is pretty smart. He could probably tell this kid wasn’t a threat,” she concluded.

She initially thought the man was her son, the report said. But when she verified it wasn’t him, she proceeded to try waking up her guest to ask about his identity.

Her friend immediately checked the unmoving intruder and found that she did not know him as well. The frightened ladies grabbed a knife and called the authorities.

Waukesha police immediately responded to the 911 call, as per report. They woke the man up and asked him if he was familiar with his surroundings.

After reaching for his glasses, the intruder realized he was indeed at the wrong house. Waukesha Police Sgt. Brady Esser stated the man was “heavily intoxicated,” but posed no danger.

Sarver suspected that the intoxicated man entered her house through the side patio door she failed to lock, the report stated. Meanwhile, the man could not remember what happened to him after midnight and how he ended up at Sarver’s house.

It turns out that the intruder was Sarver’s neighbor — he lives with his mother two doors down. Since Sarver saw no need to press charges, the police escorted the “very embarrassed and very apologetic man” to his real house. Kate Matriano/JB