Romans leap into the new year—off a bridge | Inquirer Lifestyle 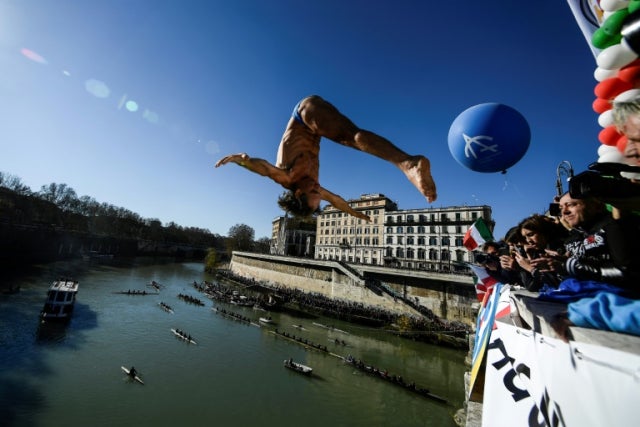 Romans leap into the new year—off a bridge

Four of Italy’s braver souls continued a seven-decade-old New Year’s tradition Tuesday, leaping off a bridge in Rome into the river Tiber.

The divers braved the cold but sunny weather in nothing but a swimming costume, jumping off the Cavour bridge in the center of the Italian capital into the waters below.

They were pulled to safety on to a waiting inflatable boat before joining the crowds on the river banks to celebrate.

The temperature of the water was no more than six degrees Celsius (42.8 Fahrenheit).

The oldest of the team was 66-year-old Maurizio Palmulli, also known as Mister Ok, a former lifeguard who was making his 31st dive.

“It was good and cold, friends! Really cold!” he told AFP after emerging from the river.

“Everything went well, no one got hurt, there were only nice folk and that makes me really, really happy,” he added.

The other divers were Marco Fois, Simone Carabella and Walter Schirra, who leaped from the bridge with an Italian flag in each hand.

Palmulli and his colleagues are continuing a tradition first practiced in 1946 when the Italo-Belgian diver Rick de Sonay dived into the river. NVG

Sydney puts on dazzling 2019 fireworks, but gets the year wrong