Putting Glam – and the Indie Spirit – Back in Rock | Inquirer Lifestyle ❮ ❯ 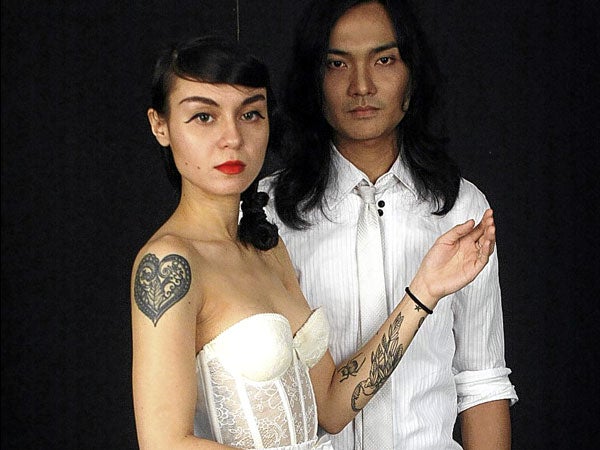 Putting Glam – and the Indie Spirit – Back in Rock

Boy moves in with girl.

Boy gets synthesizer and they make beautiful noise together.

Since bursting into the independent music scene in 2008, the electronic rock duo Turbo Goth has made an indelible impression on audiences with their high voltage live performances.

To say the least, it stands out in a scene dominated by T-shirt-wearing rock nerds.

It reminds me of that scene from Fritz Lang’s “Metropolis” where mad scientist Rotwang brings his robot wife Maria to life amid the humming and crackling of Tesla coils.

Come to think of it, Turbo Goth’s current album “Destroy Us All” – a concept album set in a near future when aliens have descended on earth – would make a great soundtrack for that silent film classic.

“Our concept for Turbo Goth is, we’ve created this little world of nice things and weird things,” says Gaugler.  “It’s like a space ship, and if you want to, you can come along.”

Her partner echoes the sentiment.  “When we’re onstage, it becomes another world,” he says in Filipino. “And we welcome people around to join us in a different dimension.”

What draws audiences in is the spectacle of two people who’ve created their own insular little world, a world that extends beyond the stage since the two have been inseparable nearly from the first time they met.

“We met in 2007 at Nino’s Restaurant in Katipunan,” recalls Gaugler.  “Paolo used to be the sous chef there.  I was then studying Fine Arts at the University of Sto. Tomas.  We started hanging out together.”

The catalyst for their friendship was a shared taste in music.

“He played two of my favorite songs, ‘Venus’ by Air and ‘Something About Us’ by Daft Punk.  I was like, ‘Oh my God, he knows these songs too!’”

Before they knew it, they were seeing each other everyday.

“After graduating from De La Salle, majoring in International Studies, I tried playing in bands for fun, but I thought there was no future in it,” recalls Peralta.  “That’s why I took culinary arts.   I became a sous chef, then I started a restaurant.”

Music remained in the back of his mind, however.

“When I was in the kitchen, I only felt half-fulfilled,” he says.  “It was only when I met Sarah that I knew what I needed to do.”

Peralta took off for a month-long trip to the US, and came back with a program sampler that had a drum machine and a synthesizer built in.

“When he got back from the States, we moved in together,” she says.  “After a month, we got our names tattooed on each other.”

The original idea was for Peralta to play music while Gaugler painted—kind of a performance art thing.

“He said, ‘there’s something missing,’” she recalls.   “He heard me humming along to the music, and he made me sing.  But I’m not really a singer – I’m an illustrator.”

Gaugler spent her early years in Clifton, New Jersey, the child of a Swiss-German father and a Filipino mother.  But she lost both of her parents under tragic circumstances at the age of 10, and suddenly found herself an orphan, living in Manila with her grandparents and an aunt.  It was a traumatic jolt that nurtured a dark world view that found its expression in art.

At 17, she ran away from home to live with a boyfriend.  She enrolled in Fine Arts at UST where she discovered producer-director Tim Burton (“Sweeney Todd,” “Sleepy Hollow,” “Edward Scissorhands” and “Corpse Bride,” among others), comic book illustrator Bernie Wrightson and master of the macabre Edward Gorey – artists whose dark world view she shared.

After graduation, she started working as a freelance illustrator for various advertising agencies.  She also became a tattoo artist and model, even landing on the cover of Uno men’s magazine.

“I still model and do exhibits for my artwork,” she says.  “Paolo cooks.  We try to keep it simple.”

The same goes for Turbo Goth’s stripped down format.

“We allot time and passion and heart to what we do,” says Peralta by way of explaining their duo format.  “If other band members can’t match that, it would only create a conflict.  Besides, technology can do what they’re supposed to do, so we don’t need them.  And daming drama pag may ka-banda [Having band members only makes things too complicated].”

“We wanted something new, we didn’t want to be like every other band,” adds Gaugler.  “Pag dalawa lang kayo, parang amazing, kasi sobrang buo ang sound.  Saan nanggagaling ang tunog [When there’s just two of you, it’s amazing, like the sounds are so whole. Where do the sounds come from]?”

Turbo Goth is a totally independent D.I.Y. effort.  The pair financed the production of their album, and take care of the distribution as well, selling copies at their gigs.  They also produced the music video for their first single “Morning Swim” with the help of friends.  The band also has a significant Internet presence.

“Nagulat kami [We were surprised],” says Gaugler.  “We have 12,000 fans on Facebook, some of them from other countries.”

In fact, Turbo Goth exemplifies the new post-music industry paradigm for independent bands, where the Internet is the primary medium for sharing music, rather than radio or record stores.

But the band really comes alive on stage, in live performances. Turbo Goth is a regular on the indie club circuit, playing weekly at Saguijo, B-Side, Route 196 and Sazi’s, and its  gigs have generated a lot of buzz.

“People come to gigs because they’re bored,” says Peralta.  “They need a break from work.  They’re there to enjoy themselves.”

Boring, Turbo Goth isn’t.   Each performance is a sonic and visual experience, which explains why the band has become a YouTube favorite.

“Pinapahalagahan namin ang oras ng mga nagpupunta sa gigs,” he adds.  “Binibigyan namin sila ng something special na hindi nila makakalimutan [We value the time of people who go to our gigs. We give them something special they won’t forget]. Bands should dress up more.  Feel the music.  It’s the most fun thing.”