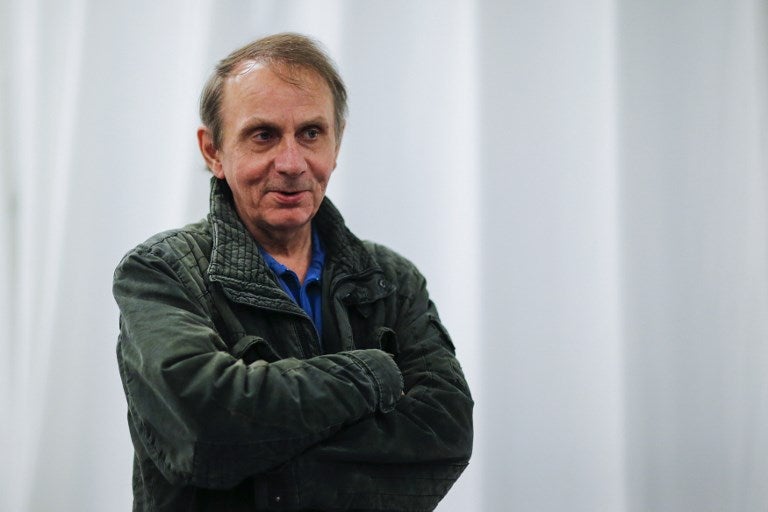 In this file photo taken on March 9, 2017 French writer Michel Houellebecq attends his first New York art show on in Manhattan, New York. - A total of 402 people -- half men, half women -- were on the 2019 New year's Legion of Honous List, including French writer Michel Houellebecq, whose latest book "Sérotonin" is to be published later this month. (Photo by EDUARDO MUNOZ ALVAREZ / AFP)

Houellebecq, a fierce eurosceptic, became a pin-up of the far right after his last book, “Submission”, which envisioned a France subject to sharia law after electing a Muslim president in 2022.

The deeply depressed hero of his latest book “Serotonin” is an agricultural engineer who returns to his roots in a provincial France devastated by globalization and European agricultural policies.

He finds a resentful rural populace who are “virtually dead” yet ripe for rebellion and who rise up to block motorways, much as the “yellow vest” movement has done for real since late November.

Anticipating runaway demand Flammarion publishing house has issued a first print run of 320,000 copies for the French language edition — 64 times that of the average novel.

“It’s all I’ve been selling since this morning,” a sales assistant at Delamain bookshop in central Paris told AFP.

At another bookshop in the capital’s 15th district, Chantal, a 67-year-old Houellebecq fan who did not wish to give her full name, said she bought a copy as soon as the store opened.

Confessing to a liking for his “nihilistic, discerning” outlook, she said: “There are few authors that have this vision of society.”

The book, which will be published in German, Spanish and Italian next week, only comes out in English in September.

“Serotonin” is not the first to be seen as a cautionary tale.

His 2001 novel “Platform”, about sex tourism in Thailand, features a terror attack on a nightclub popular with Westerners.

A year after its release, Islamist radicals attacked a bar and nightclub on the Indonesian tourist island of Bali, killing 202 people.

Houellebecq has however denied being a prophet, telling a French literary magazine in 2015 that he was merely making “projections” based on his observations.

The theme of Western decline runs throughout his work and his latest book is no exception.

Houellebecq, who was awarded the Legion of Honour by Macron on Jan. 1 for his services to French literature, rails against politicians who “do not fight for the interests of their people but are ready to die to defend free trade.”

His hero — a typically Houellebecqian narrator called Florent-Claude Labrouste who is a thinly veiled cipher for the author — also blames feminism for what he sees as the West’s demise.

“This is how a civilisation dies, without dangers or drama and very little carnage,” says Labrouste, a 46-year-old “dying of sadness” whose Japanese partner hates him and whose career is all but over.

In his native Normandy, where he goes in search of his ex-wife who left him when he slept with another woman, Labrouste finds factory workers being laid off and failing farmers committing suicide.

France’s L’Obs magazine has called “Serotonin” — a reference to the antidepressant the narrator takes — Houellebecq’s best book, “a beautiful work of infinite sadness.”

“Now, he must be taken seriously,” it wrote.

Houellebecq revels in his role as literary arch-provocateur.

In October he raised eyebrows by presenting the Oswald Spengler prize, named after the German fascist philosopher who wrote “The Decline of the West”.

At the ceremony, he said France should leave the euro, that “Muslims were a problem” in Europe, and it would be better if “the Catholic Church were back on top”.

In a recent essay in Harper’s Magazine, a New York-based monthly, he praised U.S. President Donald Trump for his protectionist trade policies, calling him “one of the best American presidents”.

His last book “Submission” came out on the same day in January 2015 that jihadists attacked the Paris offices of Charlie Hebdo satirical magazine, killing 12 people, including a close friend of Houellebecq.

It immediately shot to the top of the bestseller list, selling nearly 800,000 copies in French and over half a million in German.

In September, the author who has written that “love makes one weak”, married Qianyum Lysis Li, a woman of Chinese origin 20 years his junior. MKH