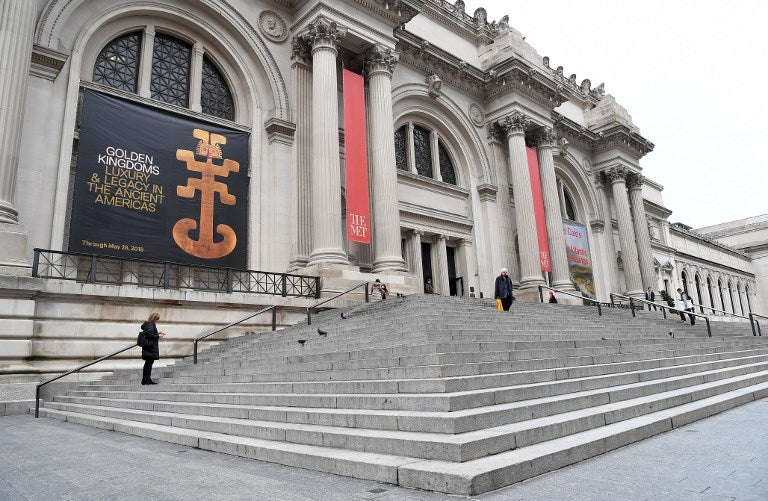 (FILES) In this file photo taken on February 26, 2018 a banner for the upcoming "Golden Kingdoms: Luxury and Legacy in the Ancient Americas" exhibition hangs outside The Metropolitan Museum of Art in New York City. - New York's Metropolitan Museum of Art welcomed almost 7.4 million visitors in 2018, figures showed January 4, 2019, a new record for the venerable institution which in March began charging a fixed fee for out-of-towners. The figure represented a rise of 5.1 percent compared to 2017, itself a record-setting year. (Photo by ANGELA WEISS / AFP)

The figure represented a rise of 5.1 percent compared to 2017, itself a record-setting year.

The bump in attendance was in large part thanks to the “Heavenly Bodies” exhibit which explored the links between fashion and the Catholic Church and attracted 1.7 million people.

Also of note were exhibitions dedicated to Michelangelo and David Hockney, both of which took place in late 2017 and early 2018.

The 2018 figures included visitors to the museum’s main building, located on the eastern side of Central Park facing 5th Avenue, as well as its two other Manhattan locations, the Met Cloisters and the Met Breuer.

Attendance did not suffer as a result of a new pricing policy that was introduced March 1, which broke for the first time the tradition of allowing everyone to pay however much they wished.

Now, those who live outside New York must pay $25 (around P1,300), though New Yorkers are still subject to voluntary donations.

The figures published Friday showed that 32 percent of visitors were New Yorkers, 34 percent from the rest of the United States and 34 percent were foreign tourists.

China was the best-represented country and accounted for 5 percent of the foreign contingent.

Despite its successes, the Met remains far behind the Louvre in Paris, which saw 10.2 million visitors in 2018 — also a record. MKH